The Merchant of Venice Reinterpreted Through Lens of Race, Time and Place 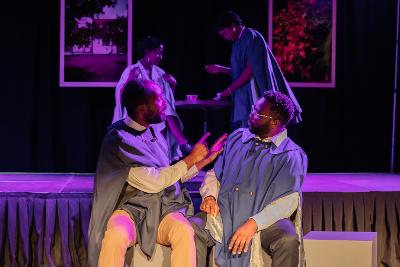 Denzel McCausland as Bass and David Hepburn as Antonio in Grace Arts Center’s Merchants of Venice.

It is bad enough that racism is rampant in America. Surely, you can imagine how much worse tensions become when and if infighting exists within the African American community (or any community under attack).

Yet, this is the case in an African American adaptation of William Shakespeare’s 16th Century comedy, The Merchant of Venice.

As you may know, in the play, an Anti-Semitic Christian merchant named Antonio defaults on a large loan which a Jewish moneylender named Shylock offers. As a penalty for defaulting on the loan, Shylock demands a pound of Antonio’s flesh.

While Shakespeare’s play takes place during the 16th Century in Venice and Belmont, Italy, South Florida playwright Darius V. Daughtry has set his adaptation in 1940’s Miami and Ft. Lauderdale. Racial tensions and infighting within the Black community replace religious unrest in the Bard’s original text.

Daughtry’s adaptation, titled Merchants of Venice, is onstage through Sunday in the brand-new Victory Black Box Theatre within the L.A. Lee YMCA/Mizell Community Center in Ft. Lauderdale. The running time is about two-and-a-half hours, including an intermission.

Although the adaptation takes place in the 1940’s, the performers speak Elizabethan English during much of the play. Therefore, it helps to be familiar with the source material. But even if you do not understand every word, it is still a joy to watch the cast members demonstrate their facility with the Bard’s English. And, impressively, they credibly express the emotions behind the words. In addition to the performers, credit Peter Galman as the production’s Shakespearean coach and assistant director.

Each year since 2015, Grace Arts has mounted an adaptation of a Shakespeare play infused with Florida history. For example, past productions have included The Tempest (La Tormenta), set in 1600’s Florida.

The production that opened Thursday and only runs this weekend is part one of The Merchants of Venice. Grace Arts will bring part two to the community during the first quarter of 2023.

Daughtry’s adaptation, like Shakespeare’s source play, is intense. It features strong conflict as well as characters with clear and intense desires. At the same time, it leaves room for comic lines and disguises, which one commonly finds in the Bard’s comedic plays.

Part of the reason that The Merchant of Venice is a comedy is that its central conflict finds resolution before anyone suffers significant harm.

In part one, Shylock is an established real estate owner and lender in Miami’s Color Town of the 1940’s (now called Overtown). Meanwhile, Antonio is a young club owner dedicated to the growing civil rights movement. This puts Antonio in direct conflict with his nemesis, Shylock, a member of the elder generation who survived the depression. Shylock is well off and hesitant to push for civil rights; he does not wish to alienate those in the white community with whom he has established positive relations.

Antonio’s friend, Bass (Bassanio in Shakespeare’s original), is interested in starting a club in Ft. Lauderdale. But in order to establish a presence in Fort Lauderdale, Bass needs money from Antonio. The problem is, the latter is already leveraged financially. So, Bass approaches Shylock to lend funds for the new venture. It is only possible through collateral which Antonio provides of his successful Color Town Fiesta Club. When the loan repayment comes due, problems arise. At stake is Bass’s club – and what he might owe Shylock if he cannot repay the loan.

Certainly, with the death of George Floyd and countless others, as well as the rise of the Black Lives Matter movement, Daughtry’s adaptation is terribly timely. It is hard not to wince when the characters carry signs that read “We Protest Injustice” and “We Demand Voting Rights Now!” Also, it is hard not to grimace when you hear lines such as “We just want to live.” Indeed, with all the strides the country has made in gaining equal rights for African Americans, a sense exists that we have taken significant steps back with, for instance, voter suppression tactics directed at minorities.

While moments of despair and anger exist in The Merchants of Venice, it also includes upbeat scenes. You get the sense that it is hard to break the spirits of the optimistic characters. Indeed, they have dedicated themselves to leading successful lives and furthering civil rights, despite the hostilities in pre-civil rights America.

Much of the adaptation’s comedy comes courtesy of characters such as women disguised as male ministers. The “clergymen,” sporting mustaches and collars, stumble while trying to lead prayer; obviously they do not know how to do it. During opening night, their stumbling and bumbling led many audience members to laugh out loud.

Daughtry not only wrote the adaptation, he directs this production. Along with infusing the production with comic energy and smartly pacing and staging the production, he strongly emphasizes the darker parts of the play. Therefore, it is easy to feel touched, or wince during uncomfortable moments. Also, strong chemistry exists between the characters. For instance, hugs and other physical expressions of support are believable.

On opening night, it was freezing inside the Victory Black Box Theatre. It mirrored the cold-as-ice tension between Antonio and Shylock. To their credit, Hepburn and Chambers-Wilson make us feel their characters’ intense dislike for each other.

In addition to the actors, the production includes guitar and upright bass music in between scenes and during the action. The music, by Aviel Del Rosario and Douglas “Xaire” Goodridge, helps create a variety of moods, from happiness to prayerful and somberness.

Also, the lighting designer, whose name is also unlisted, wisely uses a variety of hues. For instance, during passionate scenes, the designer used red. When Antonio is sad in the opening scene, blue lights shine onto the stage. At one point on opening night, no light highlighted Shylock as he delivered a monologue, so we could not see his facial expressions. This is one of the only weaknesses in this production.

Set designer Adler Guerrier uses two spaces, one offstage and the other onstage, to stand for different locations. Scenes between Portia and Nerissa take place onstage, while those involving the male performers take place offstage. Guerrier has included minimal scenery, such as chairs and tables

The costumes, by Miami Fashion Institute and with design consultation by Taofeek Abijako, include cloaks. They suggest Shakespeare’s time, while the rest of the performers’ outfits suggest 1940s apparel.

Shakespeare’s plays are classics; they manage to be timely no matter what year a company mounts a production. And regardless of how many times you watch a Shakespeare play, you are bound to take away something new each time.

Because the Bard’s pieces speak to the times, no matter what the year, adapters and directors often set the plays in different eras. Undoubtedly, you will be hard pressed to find a timelier adaptation than The Merchants of Venice.

Grace Arts Center, Inc.’s production of The Merchants of Venice runs through Sunday at the Victory Black Box Theatre, 1409 NW Sistrunk Blvd. in Ft. Lauderdale. Performance times are 7:30 p.m. Friday and Saturday, as well as 2 p.m. and 7:30 p.m. Sunday. For tickets, which cost $25 each, go to https://www.eventbrite.com/e/merchants-of-venice-written-and-directed-by-darius-v-daughtry-tickets-342685059237