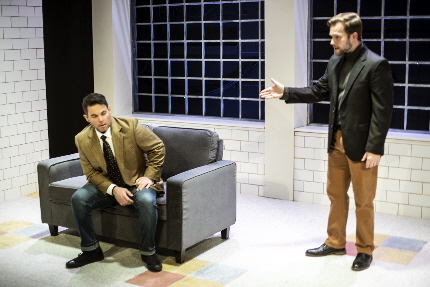 Billy Hutto as a filmmaker who was harrassed in high school for being gay confronts Todd Bruno, the bully of 15 years earlier in Island City Stage’s From White Plains / Photo by George Wentzler

From White Plains opens and closes with the jarring sound of a school hallway bell. It is not a sound originating in the present of the play, but an echo still resounding in the lives of its protagonists 15 years later.

It’s indicative because this unsettling drama ostensibly about bullying and responsibility is really about something simpler and deeper: The past owns us. And playwright Michael Perlman doubts that we can ever get past the damage wreaked decades earlier, especially incurred in adolescence. He thinks we should. He wishes we could. But in the end, he doesn’t think that we can.

Patrons will likely take away different emphases from the thematic menu in Island City Stage’s tale of a gay man obsessed with wresting a satisfying resolution from a bully whose harassment in high school caused a friend to commit suicide after graduation.

But, ultimately after depicting an escalating clash between the two adults, Perlman doubts a purging resolution is possible. So the fallout that began 15 years ago continues to plague its participants in a tragedy in which nobody wins and everybody loses.

The current conflict occurs when Dennis’ documentary memoir about the bullying that led to his friend’s death wins an Oscar. In his acceptance speech, Dennis (Billy Hutto) names Ethan as one of the chief malefactors.

Ethan (Todd Bruno), who is now just a pleasant everyday sports bar guy, comes under withering social media attack. He tells his best friend from college John (Alex Alvarez) that he doesn’t even remember Dennis, his friend or even being a bully. He seems genuinely puzzled.  He goes on social media to rebut and then perfunctorily apologize when Dennis steps up the online attacks to call Ethan a murderer. Dennis’ subsequent videos inflame nationwide outrage.

Dennis, indeed, has found this campaign an outlet for vengeance against those who verbally, physically and emotionally abused people who were discovering who they were and in some cases forcing them to deny to themselves who they were.

But this is key: Dennis’ lover Gregory (Dean Nigro) worries that the preoccupation has overwhelmed everything else in Dennis’ life, crippling his relationships and a balanced sane future.

Dennis wants something. But it’s not clear to him let alone us what that is. An apology? Revenge? Justice? Actually, his words and actions would seem to indicate that what he wants is for Ethan to be in pain open-ended for the next 15 years.

When Gregory says that life for gays in high school has improved, if far from perfect, Dennis’ reaction echoes the play’s publicity phrase, “Just because it gets better, doesn’t mean it can be forgiven.”

So Perlman does not make Dennis an awe-inspiring champion. Hutto and director Andy Rogow create a self-righteous zealot lacking any compassion, who is willing to sacrifice even the love of the man who adores him.

And yet, Perlman articulates Dennis’ rage with absolute justification, making any reasonable spectator understand the white hot source of his pain and why it drives him into behavior that will divide the audience. Like Electra in Jean Giradoux’s theatrical retelling of the myth, Dennis is indeed fighting for the right, even as that fight destroys everything around him.

Perlman through Gregory asks over and over: “Will fighting the fight make you happier? Will harping on it make it go away?” Gregory defines growing up and moving forward into the future by burying, throwing out or coming to terms with baggage. But Dennis answers that would constitute a betrayal, “If I focus on the future, then past won’t matter….”

Especially fascinating is Perlman’s evenhanded almost compassionate depiction of the bully in 2019 – just an everyday jerk who never realized until now the import of what he had thoughtlessly but constantly did throughout his high school career.

Initially, the post-Oscar furor puzzles Ethan who says he has no recollection of this behavior. But as time passes, he begins to recall some of what Dennis is portraying. Looking back at how Dennis describes him in the film and online, Ethan says of his depiction in the film, “I couldn’t believe it was me. I seemed like a completely different person.” He doesn’t see himself as particularly homophobic, although he unthinkingly rebukes his friend with “You’re such a fag.”

But as the public fight escalates, his memories return. Yet he still doesn’t see the heinousness. “I was an asshole. Who wasn’t? I was an asshole to everyone.”

One of the most effective moments is when Bruno as Ethan starts recalling for John a couple of names of people he likely “teased,” then recalls a few more, then a few more, then a lengthy list. Bruno’s face and voice reflect Ethan’s growing awareness for the first time the extent of his behavior.

Perlman is not excusing Ethan, bullying in general or homophobia; Dennis details the horrible results. He mentions the Matthew Shepherd murder without the name. Much of the time Dennis could not be more persuasive in his arguments. Which is why it seems the play is not merely or only a diatribe on these evils. It is more about how difficult it is, perhaps how essential it is, to face them, acknowledge the damage and then find a way not get past it, but to put it in its proper place in the overall spectrum of a life.

The inevitable face-to-face confrontation occurs in the green room of a television station where Ethan plans to once again publicly apologize and express remorse, and Dennis has indicated that he will forgive Ethan on-air. But the pre-show meet is more honest.  Dennis says, “I don’t know how to forgive you” and launches into a completely justifiable aria unburdening the details of life during and after the harassment.

Seemingly helpless and lost himself, Dennis says with as much frustration as anger, “It’s not fair. It’s holding on to me and it’s not holding on to you. It’s not fair.” True, but clearly it will hold on to Ethan for the rest of his life.

The early scenes are not especially clear and do not land solidly. It hurts that no one seems to speak in complete sentences. Ever. At all. But once the struggle intensifies, Rogow and the cast skillfully and unabashedly portray complex, complicated people lost in a maelstrom.

Hutto bravely depicts Dennis with all the complexities that Perlman sought: a man on the right side of the issue but who is willing to destroy himself, his lover and their future.

Ethan is one of the best performances we’ve seen Bruno deliver. Ethan’s bafflement, especially that no one will accept his apology, leaps out of his performance. He has done something wrong, he knows he has done something wrong, but he thinks that because his actions were a socially accepted norm, he didn’t know it was wrong at the time. So he wonders why he should be paying a life-changing penance now after he has acknowledged his sin and apologized.

Perlman does not provide a neat ending. What’s left is lasting devastation for both parties with Dennis’ tragedy actually exacerbated. That may not be an uplifting finale, but it certainly has integrity and provides meat to debate on the car ride home.