The Sound of Music Sings Once More With Feeling In Broward 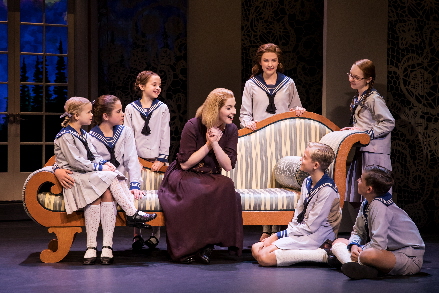 When experienced theatergoers hear that yet another revival of a driven-into-the-ground perennial like The Sound of Music is on a non-Equity national tour from a production company whose quality historically has been, shall we say, all over the map, expectations are not especially high.

NETworks’ production of Rodgers & Hammerstein’s classic is as joyful, moving and thoroughly entertaining an edition as you could ask for, with an unassailable cast of superb singers who can act, plus a directorial vibe that embraces the clean emotion of the piece without requiring anyone in the audience to take insulin ahead of time.

This isn’t Hamlet; it’s nearly impossible to find new colors or interpretations, but this crew knows how to make the most of the perfectly-constructed raw material even with just a hint of a restricted budget.

The acid test is always the scene where the children sing to their father for the first time since their mother’s death and “The Sound of Music” slices into his calcified exterior to free his pain and affection. It is the moment that most productions stumble over. But the scene, beautifully built by the writers, lands so well this time that it’s likely your throat will close up and your eyes water.

A well-received national tour started two years ago without a Broadway bow in a version helmed by mainstem director Jack O’Brien (Hairspray and many others). This would appear to be a non-Equity version of that same production with the same design elements plus a new cast directed by Matt Lenz that musical director Michael Uselmann said Tuesday had been on the road a month.

Whoever cast this edition deserves a raise. Virtually every member of the troupe down to the smallest child and the most anonymous ensemble member sing beautifully. Granted, they are working with what is easily forgotten as one of Rodgers and Hammerstein’s loveliest scores (with the original lush orchestrations by Robert Russell Bennett), but the famously demanding team would be proud of how smoothly their work is delivered and with such genuine heart. And someone deserves special kudos for seamlessly blending the voices through more complex arrangements than you realize.

Of course, what is essential is the innate likeability of the actress playing our heroine Maria who evolves from a naïve young postulate terrified of the outside world and who becomes a mature woman whose optimism, faith and love transforms herself and her family.

Jill-Christine Wiley, a former Belle and Ariel and the like, has a vocal quality like a pure bubbling spring, shimmering with a vibrance and enthusiasm that imbues the entire production. She completely inhabits Maria’s openness and honestly without seeming cloying or saccharine, a major accomplishment.

Often, the actor playing Von Trapp is the weak link in any production. Here, Mike McLean persuasively uncorks the captain’s inner spirit when most actors fail to convincingly portray either the pre-Maria Von Trapp or the post-Maria Von Trapp. McLean nails both.

The rest of the cast is just a good, notable the winsome Keslie Ward as Liesl, Jake Mills as Max and Melissa McKamie as Elsa.  But the standout is Lauren Kidwell, who might seem a couple of decades too young to be a Mother Abbess, but her glorious voice soars to the rafters with an overwhelming faith in “Climb Every Mountain.” Additionally, she acts her book scenes with nuance such as expressions that show she has experienced the same confusion of the first stirrings of love that Maria describes.

We’ve said for decades that the films of all of R&H’s work are overly-sanitized sugar-coated versions of the more complex layered stage pieces. For instance, the film cut out or cut back two of the best songs from Elsa and Max “How Can Love Survive” and “No Way To Stop It” that injected a balancing dose of modern self-centered pragmatism to all those raindrops on roses and whiskers on kittens.

Similarly, while Hammerstein was a master bookwriter, this script was penned by the famed duo Howard Lindsay and Russel Crouse (best known for Life With Father). They deftly feathered throughout the narrative the tightening noose of fascism and the courage of people with integrity to oppose it – something that will resonate with some audience members.

A nod is due the 11-piece pit band that provides a full bright sound to Rodgers’ melodious score.

Perhaps you’ve seen this show once too often. But if you have fond memories that seek reawakening or if you have never seen it on stage as opposed to the film, this is an enthusiastically recommended effort.

This entry was posted in Performances, Reviews and tagged Broadway Across America, Broward Center for the Performing Arts, Jack O'Brien, Jill-Christine Wiley, Lauren Kidwell, Rodgers & Hammerstein, The Sound of Music. Bookmark the permalink.