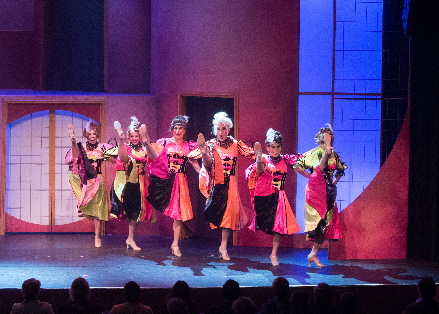 For a show that shattered a ceiling for the mainstream Broadway musicals in 1983, La Cage aux Folles has become a reliable warhorse in 2017. MNM Productions’ current edition embraces the spangles, glitz and sheer Jerry Herman of it all. So if you haven’t seen it in a while, this is an entertaining reminder.

What sets this one apart from many others is how it emphasizes the heart rather than the heat – and that’s a welcome emphasis for those who may have seen this classic once too often. It’s not that the element was never there; it’s what makes the show palatable for more conservative audiences.

But director/choreographer Kimberly Dawn Smith and Musical Director Paul Reekie have gently underscored the love of Albin, the star of a French Rivera drag show, and its producer-emcee Georges, as well as the eventually prevailing familial love with their son Jean-Michel.

Yes, there are the expansive dance numbers of men and women made up as showgirls in ever more fabulous costumes, singing those peppy show pony numbers. But they and the entire production seem a shade more muted than you have seen before.

And that’s all right because this production stars Michael Ursua as Albin and his stage alter ego Zaza. Anyone who has seen two, three, or eight productions of La Cage will happily recall the original performance of George Hearn or the 2010 revival with Douglas Hodge or Leroy Reams’ star turn at the Wick in 2015.

But Ursua, a veteran musical director, brings a vulnerability and feeling to both Albin and Zaza that humanizes a character in danger of being a caricature.  Ursua’s creation is a slightly sad but adorable butterfly whom you suspect would not survive outside of the St. Tropez hothouse. 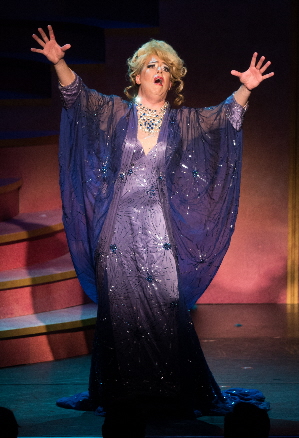 Ursua does not have the power and zest that marked some of his predecessors; but his skill echoes that of a cabaret performer – he lives inside his musical performance. He finds the emotional center of a song and then caresses the lyrics, phrase by phrase to deliver the inner meaning of the number. Speaking as someone who has seen uncounted productions of La Cage, I’ll happily argue that Ursua’s performance of “I Am What I Am” on Sunday was the most moving, most evocative rendition I have ever seen of that number. This Blanche DeBois might be fragile, but he unequivocally proclaims his identity with a pride that is undeniable. Zaza is not artificially camping up her life with a pose; this is who she is.

A similar embrace of emotion imbued the turning point reprise of “Look Over There” when Jean-Michel defends Albin to his prospective in-laws. Days later, the memory of the tenderness and reconciliation on stage remains poignant. That is due in part to the performance of Clay Cartland. Jean-Michel is one of the most thankless and shallowly written roles in the musical theater canon. But Cartland’s irrepressible spirit animates the thoughtless self-centered young man who regains his humanity.

Anyone who knows how to spell theater both ways knows the plot that bookwriter Harvey Fierstein and original director Arthur Laurents forged out of the 1973 French play (and 1978 film). The bouncy, heartfelt score was Herman’s last major effort and while La Cage was far from the last of its genre, it did and still does feel like a final victory lap. Smith, who directed MNM’s Hair, Spamalot and A Chorus Line, knows the vibe well and how to evoke it. There’s one element worth carping about. In one scene, the dancers are supposed to be executing their numbers a little sloppily – a cute musical theater joke because these are not the cream of the crop corps. But in fact, Smith’s dancers aren’t as knife sharp as you would hope through the rest of the evening.

Her cast is solid with a few standouts. Elijah Word, an outstanding singer-dancer in revues at Broward Stage Door, is an unqualified hoot as the way, way over-the-top house servant who was hired as butler but who insists on being called a maid and who savors dressing up in outrageous costumes. As tall, lithe and agile as a basketball center, Word has so much fun camping it up that the audience has to be enchanted with him.

Aaron Bower doesn’t get a lot of stage time as Jacqueline the soignee restaurant owner, but she sparkles anytime she walks across the stage. Other reliable hands include Troy Stanley reprising the priggish homophobe he portrayed at the Wick, the trained dancer Patti Gardner acting ungainly as his subservient wife, Pierre Tannous as the hapless stage manager and the adorable Kimmi Johnson (who was so good in Bad Jews at Main Street Players) as the love interest.

Larry Alexander also has one of the most thankless underwritten leads in the canon as Georges. Alexander has a pleasant voice and is a decent experienced actor, but his Georges lacks the sparkling verve and panache that, first, you’d expect of a cabaret emcee and, second, is inherently strong enough to counterbalance Albin/Zaza.

Reekie’s tuxedoed band does a reasonable job standing in on stage for a cabaret combo. Casey Blanton creates a set with a pink marble staircase like a tiered wedding cake that gives Smith lots of levels to work with. The required parade of outlandish costumes was designed and rented from a Chatham, New York, theater.

The other somewhat faulty element of the production was the lighting—the company needs about another half-dozen lighting units to fill the stage and maybe some better decisions such as having the opening chorus number in dim light 80 percent of the time.

One sign that times have changed. Before the show opened on Broadway in 1983, the producers and creative team knew they had wrought a beautiful and well-crafted show about love. But they were terrified that that mainstream audiences would not accept it. On MNM’s first Sunday matinee, the auditorium was lightly peppered with young girls more likely seen at Wicked.

Even muted, MNM’s La Cage’s joie de vivre is infectious and you’ll be hard pressed not to tear up one minute and be clapping along the next.

La Cage aux Folles  plays through Oct. 22 at the Rinker Playhouse at the Kravis Center for the Performing Arts in West Palm Beach. Performances 7:30 p.m. Tuesday-Saturday, 1:30 p.m. Wednesday, Saturday and Sunday. Running time 2 hours 25 minutes with one intermission. Tickets $45. Visit www.kravis.org or call (561) 832-7469.  Local resident Kenneth Greenblatt, who invested in both the 1983 original Broadway production and the 2004 revival, will do a quick post-show talk-back with the audience on Tuesday, October 17.