The Temptations Musical is Inarguably a Tempting Treat 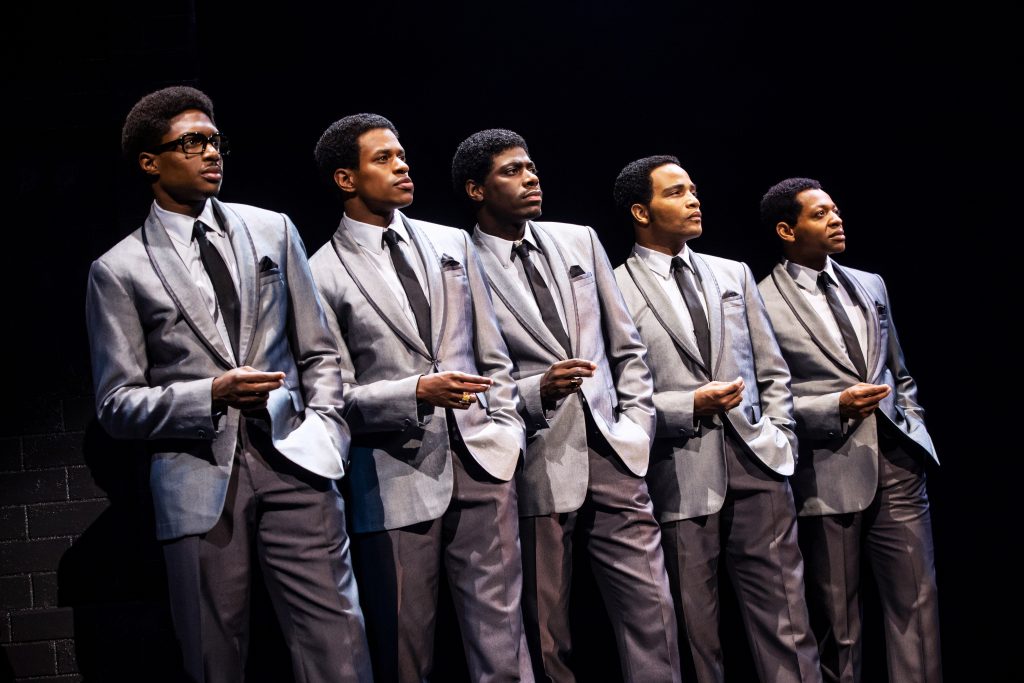 The appeal of biographical jukebox musicals hinges on the strength of the music and the audience’s strong connection to the songs and the group. Music is such a memory trigger, taking you back to where you were and who you were when you first heard that song.

The exuberant production of Ain’t Too Proud: The Life and Times of The Temptations, running through Feb. 20 at the Broward Center for the Performing Arts in Fort Lauderdale, checks all those boxes.

Ain’t Too Proud recounts the group’s origins and its rise during Motown’s glory days.

From the second that the five actors hit the stage portraying The Temptations, the moment encapsules the past and the present. The Temptations’ precise choreography, crisp suits and meticulous vocals take the audience back to the group’s heyday while adding a contemporary vibe.

As The Temptations leader and the show’s narrator, Otis Williams, powerfully portrayed by Marcus Paul James, tells how The Temptations began on the streets of Detroit. Early on, teenage Otis spent six months in juvenile detention, and made the decision that his life would be more than crime and prison. The salvation for him would be the music. He assembles a few friends who become the original five members.

Core members are replaced. As Otis quips — “sometimes Temp stood for temporary.” The group has a few years of modest successes before becoming a part of the Motown machine, rename themselves The Temptations and are groomed by Motown kingmaker Berry Gordy (persuasively portrayed by Michael Andreaus).

The hits begin as fans discover The Temptations, but the road to success is not easy as Ain’t Too Proud shows in its two very strong acts.

Drugs, alcohol, medical issues and arrogance took their toll on The Temptations, resulting in even the most popular members being ousted to preserve the group’s core mission. As Otis and others say, the whole was greater than the sum of its parts and The Temptations were a group with no one singer being allowed to dictate to the others. That credo became the reason for its success, and its problems.

While James receives the most on-stage moments as narrator Otis, each of actors portraying The Temptations in this production is a stand out—reinforcing that the group, not individuals, is most important. Each caresses the songs, blending their voices to a silky sheen with power. So many compliments go to James T.  Lane as Paul Williams; Harrell Holmes Jr. as Melvin Franklin, Jalen Harris as Eddie Kendricks, Elijah Ahmad Lewis as David Ruffin. They are later joined by Devin Holloway as Richard Street and Harris Matthew as Dennis Edwards.

Through it all, music is the survivor, the one constant as Ain’t Too Proud proves with songs effectively used as a scene transition, character development, even as punctuation. The song list is large and while each tune gets its due, there are standouts. “My Girl,” “Ain’t Too Proud,” “Can’t Get Next to You,” “If You Don’t Know Me by Now,” “In the Still of the Night” and “For Once in my Life” (written by Stevie Wonder).

“I Wish It Would Rain” effectively becomes a political statement against the backdrop of Civil Rights Movement and Dr. Martin Luther King’s assassination, with solid projections showing news clippings and photographs of the era.

Then there is the marvelous “Just My Imagination (Running Away With Me)” that Otis says is the last song Eddie Kendricks recorded with The Temptations and is his favorite. It was ours, too.

Many of the supporting cast also do double and, in one case, triple duty. Kudos also to Lawrence Dandridge as Smokey Robinson, Damon Harris and a couple of smaller roles; Brett Michael Lockley as Norman Whitfield and Al Bryant; Shayla Brielle G. as Mama Rose, Florence Ballard and Tammi Terrell; Traci Elaine Lee as Johnnie Mae and Mary Wilson. Praise also is earned by Deri’Andra Tucker as Diana Ross and Najah Hetsberger as Josephine.

During its Broadway run, Ain’t Too Proud was nominated for 12 Tony Awards, winning for choreography.

With their signature dance moves and harmonies, The Temptations has had 42 top ten hits with 14 number one hits, four Grammy Awards and nine Grammy nominations. They were inducted into the Rock & Roll Hall of Fame in 1989 and received the Recording Academy’s Lifetime Achievement Grammy Award at the 56th Annual Grammy Awards in 2013.

Declaring himself the “last man standing” of the original group, Otis also shows that not only does the music endure, so do The Temptations. To date, he says, 24 singers have moved in and out of The Temptations.

It’s possible that the highly entertaining Ain’t Too Proud: The Life and Times of The Temptations may be the highlight of this season of Broadway Across America.

COVID Protocol at Broward Center: All guests age 2 and over are required to wear a suitable face covering while inside the theater. All guests age 12 and over are asked to provide documentation of a recent negative COVID-19 test OR, fully vaccinated guests provided the option of providing documentation of full vaccination status; matching photo ID will be required for adults 18 and over.
Visit the Guest Policy at https://www.browardcenter.org/visit/guest-entry-policy for full details.

This entry was posted in Performances, Reviews and tagged Ain't Too Proud To Beg: The Life and Times of The Temptations, Broadway Across Fort Lauderdale. Bookmark the permalink.