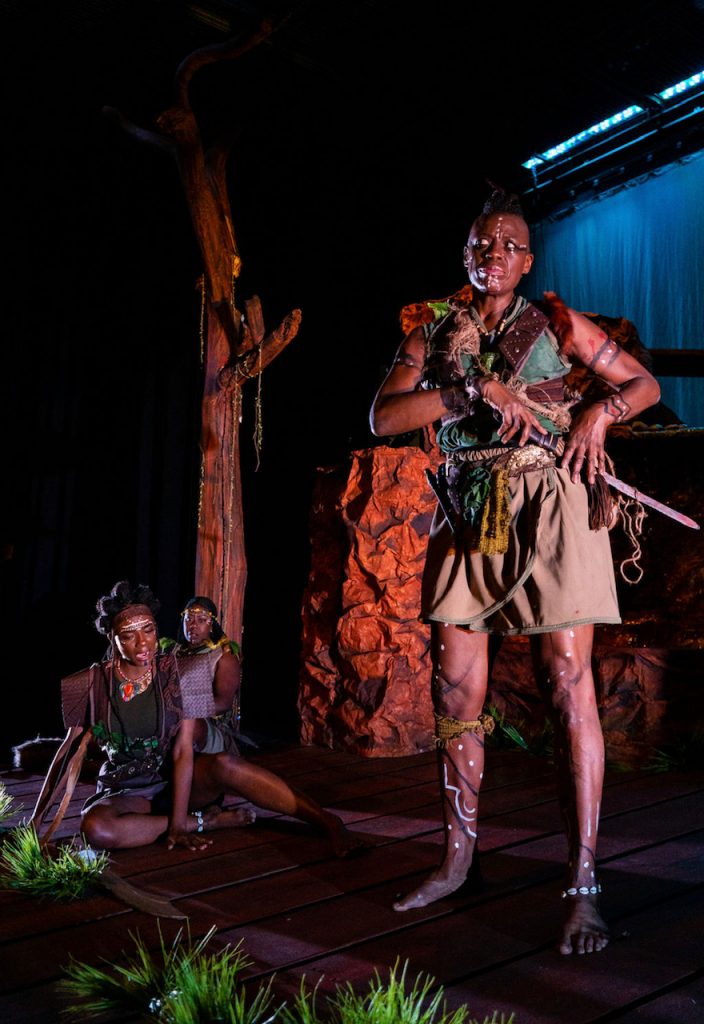 For most of us in the 21st Century, but certainly for the majority of white Americans, the word “colonialism” is an abstract term usually confined to college history courses and professorial treatises.

But in Layon Gray’s consciousness-expanding new drama The Dahomey Warriors, the concept of foreign powers occupying a beachhead and then expanding through your homeland, your citizens resisting the inevitable dilution of one’s culture and then seeing the erosion of true freedom becomes a palpable personal three-dimensional tragedy.

Yet, never lost by the protagonists in this fact-based story of this western African tribe, what permeates their existence and pours over the footlights is an inextinguishable pride amid a world of betrayals – internal and external.

And integral to everything from the story to the play’s appeal to our times is that the Mino, frontline military of this absolute monarchy that spent 200 years conquering neighboring tribes and lands, that army was led by and consisted of women.

The play runs a tad long and has a central structural weakness, but this entry at the M Ensemble Company, likely the oldest continuing troupe in the state, is magnetically engrossing and enthralling.

The play is set 1892, more than a century after the British had created a colony to further the slave trade (which the Dahomians fully participated in with its war captives). Now the French army is moving to take over the country after decades of their countrymen operating various trading operations from a port city they control.

The narrative finds Oni, a majestic general; Kunto, a pregnant comrade, and Ebele, a teenaged princess in warrior training, all taking refuge in a secret retreat as they plan how to raise opposition.

Gray rightfully depicts a tribe far from some idealized Wakandans. They have an autocratic monarchy. They are focused primarily on war and conquering people. They have no problem participating in slavery. They have for years practiced human sacrifice.  But they are also deeply connected to nature and the land.

The first act densely limns this culture with intentionally stilted verbal rhythms, frequent sentences in the Yoruba language, hand-made garments and weapons, trumpeting song-chants, references to the tribe’s harsh and male-dominated customs, and communing with nature including an almost magical hyena creature that may be the reincarnation of a warrior’s spirit. Side note: The attention to detail in the script and the artists’ performances to convincingly deliver these facets is impressive.

But the stakes raised in the first act quadruple in the second as Abioye, a former Dahomian sold into slavery and later westernized after escaping, returns to try to broker a one-sided treaty for the French by “buying off” the general.

Echoing what was an even more complex chapter in actual Dahomian history, politics between Dahomey royalty and French business interests undercut the purer ethos of the military trying to maintain independence and freedom for their people. Old personal betrayals and current political ones portend death. Pride versus politics: The end of the arc is inevitable — arrows, spears and homemade swords against firearms and total lack of conscience.

Although the production is told in stylized theatricalities, Gray’s direction and the performances make the story as much, if not more, about the human beings who are in as much conflict as the armies offstage. Troubled backstories and guilt-suffused secrets emerge in heartfelt monologues.

But something feels missing. Everything occurring before us among the characters is being driven by the events raging outside: invasions, bloody battles, political alliances. Probably it would take a film to include these; when Shakespeare tries to bring them on stage, they never feel quite real. But having characters talk about it instead of showing it is akin to writing a play about the complexities and fallout of Jan. 6 but having some senators in a locked file room discussing it.

Gray, who also directs this work and has a lead role, has delivered successes for this troupe with other looks at chapters of black history lesser known among mainstream white theatergoers, the Carbonell-winning, Kings of Harlem and Cowboy.

The play has only been performed once before, at the biennial National Black Theatre Festival in Winston-Salem. It starred New York-based actress Aixa Kendrick. M Ensemble founders made her casting a requirement for re-mounting the work. If you come to see this edition, you will understand instantly.

Often crouching like a predator awaiting her prey, her limber nimble Oni always exudes a catlike anticipation with eyes blazing and controlled violence inherent in every sentence. Kendrick’s Oni is the embodiment of fierceness and Kenrick’s bravura performance instantly dispels any ludicrous doubt that these warriors existed. An unwavering patriotism does not hide Oni’s deep acknowledgment that opposition to the French could be personally – likely will be — fatal and possibly a lost cause. Her rousing final speech at the point of death resonates with some of the hero’s calls to arms in Braveheart.

Gray’s staging keeps these characters in motion and the narrative is punctuated by swordplay and physical fighting choreographed by Diego Villada. The women
clamber up and over and around the multi-level crags of Mitchell Ost’s safe retreat, which comes complete with an operating one-story waterfall and two-story tall wall of spears which looks like an abstract artist’s jumble of pickup sticks. Ost, who enhances his set with mood-keyed lighting, has proven over and over with a comparatively modest little budget at M Ensemble an ability to create a theatrical environment such as Seven Guitars.

Especially striking is the cast’s convincing smooth immersion in the Yoruba language, which can approach musicality. But Gray has everyone speaking at a rapid clip even in English and very, very often plot points and relationships get lost because large swaths become unintelligible.

Toddra Brunson creates a Kunto who, though close to giving birth, remains a military force of nature brimming with pride over the Mino’s past and present. Brunson freezes the audience with clarion chants that reverberate off the theater’s walls, her arms reaching to the gods for succor.

Asilia Neilly projects the feeling of entitlement that privileged teens have in the princess Ebele, who wants to be a warrior but who has much to learn.

The tall and broad-shouldered Gray is an imposing Abioye who rationalizing believes he is trying to get the best deal for his people even as he is betraying them. His monologue retelling his years in slavery and his journey to the western idea of “civilized” are deeply moving.

Iman Clark prowls the stage as the hyena and Charles Reuben Kornegay is the biracial French colonel with eroding patience for what he knows are meaningless negotiations with Oni.

The soundscape of nature – crickets and the like – is enhanced with snatches of evocative, often delicate underscoring with a harp and other instruments.

A shoutout is required for Dunia Pacheco for the costumes seemingly built out of the land itself and which include considerable designs painted on faces and limbs.