The Wick’s Peter Pan Soars When The Music’s Playing 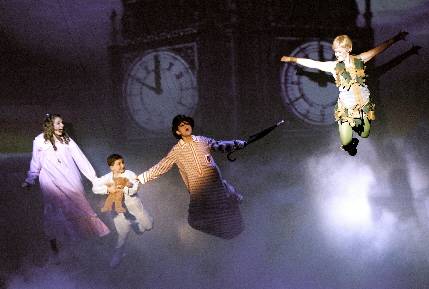 The Wick Theatre’s lush production of Peter Pan is thrilling whenever it breaks into song, spinning spells of gently whimsical fantasy.

Otherwise, with a few notable exceptions, this second production of The Wick’s first summer season settles for being a modestly entertaining evening worth bringing your kids or just yourself if you don’t have kids.

But the sense of wonder is ephemeral. It’s hard for adults or even youngsters to be thoroughly enchanted when you can see the metaphoric wires hauling the actors and the show aloft. Even with everyone connected to the show investing considerable imagination and wit, it’s a challenge to lose yourself in the dream.

But not quite impossible. Michael Ursua’s production passes the crucial test: In a classic scene when Tinker Bell drinks poison to save Peter’s life, our hero pleads with the audience to clap in affirmation to save her life. Here is a moment equally beloved and lampooned in theater history. “Do you believe in fairies?” Peters calls out to the audience. For a terrifying split-second, there was silence opening night. Then the voice of a youngster called out in the darkness, “Yes,” and the entire crowd of grandparents, cynics, musical theater buffs, even critics cheered, whooped and happily applauded.

Another memorable Wick moment did involve flying. We had seen Peter swing around the stage in two and a half dimensions on the Wick’s relatively shallow stage to the exultant number, song “I’m Flying.”

But hearts leapt when the three darling Darling children simultaneously rose to the rafters with Peter and the quartet began gliding around the nursery to the crescendo of one of most exuberant songs written for musical theater. An undeniable shock of electricity passed through the necks of much of the audience.

Conversely, the scenes in which Peter, Capt. Hook, pirates, politically incorrect Indians and the Lost Boys scrimmage are small confused traffic jams lacking clarity or polish, thereby undercutting the suspension of disbelief. Furthermore, while most of the actors give everything they have to inhabiting these characters, the book scenes play just adequately enough to carry us to the next musical number.

The exception, thank goodness, is Peter. Who knows how they found L.A.-based Shanon Mari Mills. But they ought to buy her a first-class plane ticket back home when the run ends. Here is where the production’s magic resides.

Start with her voice, the crucial element to put across some of the loveliest and funniest numbers in the musical theater canon. Notes and words emanate with the fullness, strength and confidence that the role absolutely requires. The moment Peter began to extoll the virtues of his home, “I have a place / where dreams are born….” Audiences familiar with the score knew they would not be disappointed.

Then credit her inner power plant with the verve and energy that drove every scene she appeared in, musicalized or not. And although she’s obviously a lovely young woman under the makeup smudges and an untamed hairdo, the actress was as convincing as you could hope for as the proud and petulant boy who even in his boastfulness and bluntness symbolizes the lost innocence of anyone in the audience over Bar Mitzvah age. Anyone asked “Who are you?” and who can pull off the line, “I am youth. I am joy. I am freedom!” deserves on ovation right there.

Having watched Cathy Rigby while performing in a national tour, Mills also knows that the secret to making the flying even half-convincing is to dynamically move your arms and legs in flight.

Robin Hayes, with a perfect plummy baritone, does a fine eye-rolling job chewing the scenery as the villainous Hook (and Mr. Darling, of course). Lithesome Lindsay Bell, one of The Wick’s best dancers, is allowed to show she can sing and act as the winsome Wendy; Ann Marie Olson lends her lovely soprano to Mrs. Darling with “Tender Shepherd” (it always makes me choke up when the kids come home); Emily Tarallo makes an endearing Tiger Lily; Wesley Slade creates a wonderfully woebegone second banana Smee; Trevor Wayne is a serviceable John Darling, and Ryan Sell who seems to have a standing contract this season at the Wick scores his best performance yet as little Michael.

The vitality in the show never flags thanks to Ursua, the director-musical director, and choreographer Shanna Sell. We’ve never seen the show in stage before but the dance highlight is the group drumming during the reconciliation of the Lost Boys and Indians. Characters express joy at almost every opportunity with feet spread wide apart and arms outstretched to embrace whatever comes. Again, some of the crowd scenes feel confused and forced, destroying the spell. On the other hand, kudos are due for deftly getting the flying wires on and off characters without much of the audience noticing.

Once again, we miss a live orchestra. But when you have a limited budget (is that a redundancy) a show like Peter Pan requires a full, rich sound, so The Wick has once again rented digital tracks from The MT Pit LLC.

Sound designer Justin Thompson created or supervised hundreds of aural cues from the glissando of tinker Bell to a jungleful of animal sounds. A nod then is also due stage manager Craig T. Rasner and his assistant Michael Small for making them all land at exactly the right moment. There were some lighting mishaps but they will likely be ironed out in a few days.

If ZFX Flying Effects’ wires can be clearly seen, the real magic of soaring through the sky is amped up thanks to the work of projection designer Josieu Jean as we swoop with Peter and the Darlings above and through Victorian London en route to Never Never Land. As fine as Micael Boyer’s sets of the Darling nursery and Thomas Shorrock’s lighting are, much of the overall ambience comes from Jean’s projections, such as his verdant island views accented by an occasional falling blossom It goes without saying that the costumes have style and wit, especially the motleys worn by the pirates (although we could always see the contraptions to which Peter’s flying wire were to be hooked at the top of his back).

A quick aside: The script is not credited to anyone other than Peter Pan’s creator J.M. Barrie who was long dead when this musical bowed in 1954. What the show preserves is Barrie’s success in writing a show that appeals to children and “the child in everyone,” but which very quietly but distinctly says something to adults about the inevitable need to grow up to become a fully-realized human being. Barrie wants us to fondly remember our childhood but he actually is not endorsing that we stay children, only that we try to keep alive the virtues inherent in childhood and which sometimes get lost as we “mature.”

History Lesson: The musical is, of course, based on Barrie’s 1904 play that led him to write a series of children’s novels later. An American team failed to make a successful version for Broadway in 1950 even though they had Leonard Bernstein inject some songs.

In 1954, a different team led by producer Edwin Lester put together a new version with a script credited to no one other than the long-dead Barrie. The score was written by Moose Charlap and Carolyn Leigh, but Lester and director Jerome Robbins were underwhelmed by the reaction to an out-of-town tryout and hired best in the business, composer Jule Styne and lyricists Betty Comden and Adolph Green, to compose seven songs including the ineffably lovely Never Never Land. Kit starred the ageless 40-year-old Mary Martin a few years past South Pacific and the inimitable Cyril Ritchard as Hook.

Part of the financing deal was to have a limited Broadway run so that NBC could broadcast a live version seen across the country. They did in 1955, 1956 and 1960. That and a popular original cast album instantly made the work part of the fabric of the childhood of Baby Boomers and their parents, leading to numerous popular revivals and tours (with Sandy Duncan and Cathy Rigby) and last year’s disaster of a needless television remake with Alison Williams and Christopher Walken.