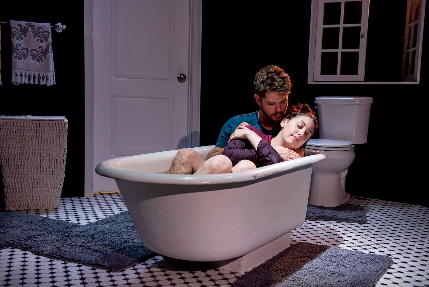 The naked young woman emerges from underneath the waterline of a porcelain bathtub with her long black hair cascading down her back like a nun’s wimple.

You have been warned: Theatre Lab’s world premiere of Jennifer Lane’s Harlowe is indeed quiet, muted, dense. The titular heroine, who is coping with the emotional and literal scars from some horrific attack, can no longer feel anything, psychologically or physically.

Her problematic — well, recovery might not be the right word but it will have to do — in her father’s house is a herky-jerky  process made all the more difficult because her widowed father, caretaker sister and adolescent brother are nursing their own wounds. Together, they cope with gentle gallows humor leavening painful probes into a dysfunctional past.

The production deftly and imaginatively melds skills and insights, but the play seems to lack clarity and focus.  Is it about healing, family dynamics, sex, relationships? All of the above, something else? It might require a second viewing to work it out. Which is not something to discourage you necessarily; perhaps it will encourage you.

The writing, the direction and the acting all are commendable, but it’s a quirky sui generis piece that is hard to plug into emotionally — especially since the characters are, at best, avoiding their feelings, and at worst, completely cut off from them. It requires the audience to get in the tub with Harlowe and her family as they struggle to make connections with themselves and each other. Some folks are not going to have the patience to stick with a play that is intentionally under water most of the time. But for others, it is worth the effort charting these characters as they resurface into life.

Harlowe (Leah Marie Sessa) is an aimless ne’er do well who has thoughtlessly tossed aside the brains, beauty and assorted other blessings. She has come home to Connecticut after being assaulted by her ex-boyfriend in New York City, an attack that has wreaked a cost not immediately acknowledged.

Her sister, Reese (Katherine C. McDonald) has come once again to her rescue despite her long-gestating resentment of how Harlowe has wasted her gifts. Their father (Michael Gioia) seems amiable, but he, too, is emotionally limping in the wake of the suicide of his wife in the adjacent swimming pool. That tragedy didn’t make anything easier for brother Davis (Eli Moseley), already dealing with the throes of adolescence.

The play opens as Harlowe is spending uncounted hours in the tub in Michael McClain’s stark black and white bathroom, holding her breath underwater.  The nudity tastefully choreographed in the opening scene is completely justified to represent Harlowe’s vulnerability. When she stands up with her back to us, her body is revealed mottled with bruises.

Complicating matters — not making them better or worse – is the appearance of Scott (Jordon Armstrong), Harlowe’s old beau for whom Reese also carries a torch. Indeed, Harlowe, whose interaction with her family does not even qualify as subdued, barely perfunctory, finally connects on a date with Scott, blithely gifting him with oral sex in the car. Frankly, and blame Lane for this, her markedly heightened behavior with Scott makes her shutdown affect for most of the play inconsistently difficult to reconcile.

Among the things that are unclear is what occurs to make Harlowe begin to emerge from her condition and what finally sparks her return to feeling again. Also unclear is how much of her current behavior is due to the tragedy; Davis berates her for not crying at their mother’s funeral some time earlier, for just being a shell. She acknowledges, “I guess I always just felt like a passenger inside myself, like my body was just how I transported my consciousness from place to place.”

Harlowe herself is obviously the linchpin of the tale, but Lane spends a good deal of time on the other characters’ separate pain, thereby detracting focus from the title character and her evolution.

Lane’s dialogue can be as spare as the affect that the characters allow in each other’s company. But the interior monologues that Harlowe delivers as she searches inside herself are impressively lyrical and punctuated by pungent metaphors.

“I used to think that time can heal. Time can’t do that at all. I don’t know what makes you heal, but it isn’t time. Time is a silent companion to whatever it is that sweeps in and patches you up. Time is a witness; Time passes judgment… But scar tissue — there are no nerve endings in scar tissue. So time will pass, and this fibrous mass of collagen will form and fade and be weaker than the skin that surrounds it, but it can’t be hurt again, not really. Not in the same way. If you were to cut over it again, it wouldn’t feel a thing.”

Sessa, well-known for her vivacious characters in musicals, bravely enters the skin of a creature at the other end of the behavioral spectrum. She embraces Lane’s monological musings with an intentionally odd, abstract delivery as Harlowe notices the slightest new object or paradigm like someone suffering from a cross between ADHD and autism. Sessa’s Harlowe is fascinated by her own lack of feeling as if she was studying an animal on a high school biology dissection tray. She spends most of the evening with the corners of her mouth turned down except when she reveals a sick smile of regret. But Harlowe’s affect is markedly and inexplicably more animated with Scott; that’s a problem with the script and the direction.

Even with flaws that need to be addressed in future productions, director Matt Stabile and his company have delivered an intriguing thought-provoking evening worth your time and money.