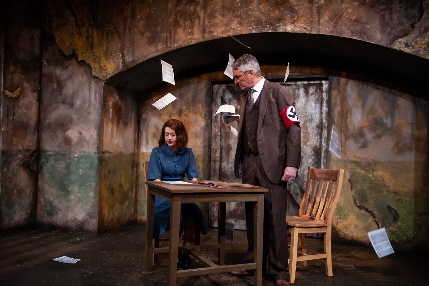 Until recently, for Boomers and Millenials, one of the most baffling questions about the mid-20th Century was how Hitler gained and kept power with so many people supporting him and so few people actively opposing him.

Whether you decry the current American administration (or the previous one), the profound impassioned sense that the country teeters on self-destruction has brought onto our ideological doorstep the same deep question: when you believe something is wrong, just how far are you personally willing to go “to do what’s right,” even when you doubt you will be effective, even when your life is not just at risk but almost doomed to be forfeit?

Although the drama We Will Not Be Silent is suffused with a long dorm night’s worth of philosophical and moral gymnastics, playwright David Meyers and Theatre Lab inject the audience so deeply into such an almost tactile dilemma on stage that we must at least ask ourselves those crucial questions about courage, conviction and integrity.

This rendition of a 2017 script is not as emotionally gripping as even the artists likely hoped, so it seems to go on a tad too long. But it plunges the audience into a life-and-death maelstrom of competing ideas.

The play is drawn from real people and events. Sophie Scholl was a college student in Munich who helped her brother and others form a propaganda-based non-violent anti-Nazi organization called The White Rose. They were arrested and guillotined.

The play is Meyers’ imagined interrogation of Scholl (Isabella Werber) by a former civilian detective determined to elicit a confession and names of collaborators, and for her to give a public renunciation of resistance and an endorsement of Hitler.

The interrogator Kurt Grunwald (Michael McKenzie) is not some snarling sadist, but an ordinary Everyman familiar with philosophy and literature who hopes to persuade Sophie to cooperate through reasoned argument.

Sophie, who also seems prosaic rather than heroic, starts off convincingly maintaining her innocence to the point that we wonder if she isn’t unfairly accused. But Grunwald encircles her with evidence, her brother’s confession, logic and emotion until she acknowledge her opposition to the Third Reich’s fascism.

Grunwald employs a half-dozen approaches from offering to save her life to asking her to “volunteer” names the Gestapo already knows, to the likelihood that what she has done will not make a bit of difference. “Why do this when you know you cannot win?” he asks. But she realizes that Grunwald is not a true believer and she questions him about why he does what he does.

At various points, each says, “I have no choice.” But in fact, she does; she has chosen this path and chooses not to veer from it. And in fact, she rightfully argues, he and the German people had and still have a choice as well.

But Sophie keeps crossing this inviolable line or that, undercutting her purity as a martyr. Like St. Joan, Sophie has her moment of weakness, but her final decision is no surprise.

The entire effort by Meyers, the cast and director Louis Tyrrell is unassailably earnest. But for some reason, it just doesn’t land quite right. What seems like a swirl of arguments and counter-arguments actually feels like they are asking us just one simple question — and that shouldn’t take 78 minutes.

The lead performances are adequate although neither are mesmerizing. McKenzie convincingly delivers Grunwald’s conflicted but knowing compromise, a man quietly infected by doubts of conscience that Sophie’s example fans into flame. He creates someone we might see in our office lunchroom or even in the mirror. Which, of course, is the point.

Werber credibly channels Sophie’s angst and passion with an unassailable sincerity. The asterisk is that it seems Meyers doesn’t give an actress many options, so Werber plays exactly the same note nearly the entire night: a shuddering, shaking, nearly weeping victim consumed with fear, anxiety and doubt – legitimate reactions but theatrically static. She is always a victim, never an equal competitor in the back and forth with Grunwald.

Meyers has said in interviews that he is not directly equating Trump with Hitler, nor is this a Holocaust play. His aim and his success is to explore the larger issues of social responsibility and personal integrity which are timeless and boundary-less.

Still, the resonances in 2019 are hard to ignore. For instance, the opening audience sucked in its breath when Sophie tells Grunwald, “Just because you repeat a lie doesn’t make it true.” At another point, Grunwald argues that she cannot dismiss that Hitler has done some good, such a rescuing the disastrous Weimar Republic economy. He argues, “Perhaps people have chosen the leader they want.” But referring to Hitler’s horrible actions, she counters that “He told you what he’d do.”

We Will Not Be Silent runs through Feb. 24 at Theatre Lab on the FAU Campus in Boca Raton. Performances are 7:30 p.m. Thursday through Saturday and 3 p.m. Saturday and Sunday. Runs 1 hour 20 minutes with no intermission. Tickets are $35. Log onto https://www.fau.edu/artsandletters/theatrelab// or call (561) 297-4784.