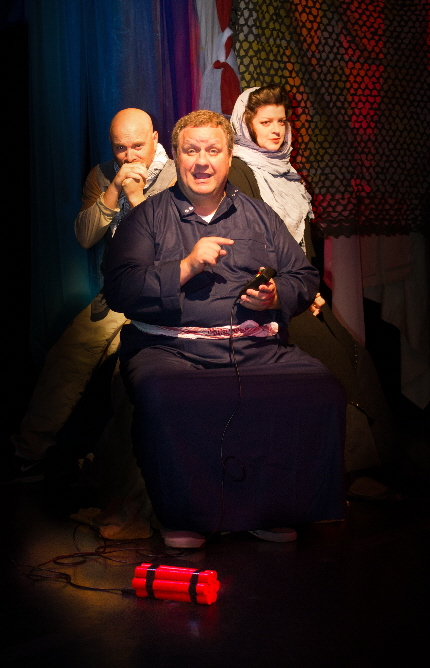 You may have noticed headlines the last few days about a sharp drop in the stock market. In playwright Theo Reyna’s slightly daft fiscal world view, that may be because Money has been on the loose having a good time carousing.

In Mad Cat Theatre Company’s world premiere of Lazy Fair, Reyna’s drily funny treatise on greed, Money – or actually The Spirit of Money – resides in an ornate wooden box guarded by a robed monk who speaks to and for the creature.

The sub-prime mortgage scandal, the Lehman Brothers debacle and a dozen other financial misbehaviors? Money fell into the wrong hands, literally not metaphorically.

The script subtitled A New Myth on the Power of Greed, needs slimming down, tweaking and maybe an attempt to dig a little deeper. But droll deadpan humor suffuses this spoofy hoot and makes it worth seeing. Reyna, a Mad Cat company playwright, director and actor (recently Centralia), doubles here as the director. That’s a wise move since his script wouldn’t work with a troupe that couldn’t find the particular groove of his offbeat humor.

The second act run a little long, even though the whole evening is only 90 minutes including intermission, because much of it simply keeps riffing like a SNL skit on the same underlying metaphors about greed and Money; it doesn’t really go beyond that initial premise. But the script has undergone changes through rehearsal including an 11th hour change in the ending, so it will be interesting tracking down to see in its next iteration.

Intentionally or not, the play’s first third works the best. In what seems a low-rent caliph’s palace in the present-day Mideast, Rip (Ken Clement), a wealthy American, has invited over an old buddy, Otto (Andy Quiroga), for a visit. Otto, still dressed in Desert Storm fatigues, has lost most of his memory about some traumatic undertaking 10 years earlier with Rip and a missing colleague, Sandra.

Reyna’s script and direction create a Beckett/Godot world where the audience is as much in the dark as Otto. Shred by shred, hazy facts seep into the reminiscences for both Otto and us. The magnetic attraction of this slowly revealed mystery is precisely that the details are nebulous. Everything said about greed, betrayal and the pursuit of wealth are far more universal because, in fact, we don’t quite know what specific situation is being recalled.

It helps that Reyna is blessed with two of the region’s best actors who smoothly negotiate the half-sentences and unfinished thoughts that are intriguing because the characters know what those phrases are referencing, but we don’t, intentionally leaving us at sea.

The truth is revealed in a flashback (minor spoiler alert) in which the three adventurers (including Meredith Bartmon as the AWOL Sandra) have set out to burglarize what they believe is the largest single stash of wealth in the world. Even though the scene occurs on the cusp of the break-in, the narrative slows a bit while the trio ask and debate issues like why do the rich have all the money and is that right? Rip is a greedhead while Sandra and Otto want to redistribute money to change the world for the better. They bicker, balk, fret and delay like The Three Stooges about to rob a bank.

(Bigger spoiler alert) The trio succeed in breaking into a desert stronghold, but instead of Ali Baba’s cave of mountainous wealth, they are faced with, well, Money, and his buddy in the burnoose (Reyna himself). Surprises, betrayals and what ensues explains a lot of what has been happening in the world over the past decade.

At this point, we have slipped into a tongue-in-cheek comic book land replete with silly humor and that battering of the idea that The Spirit of Money can be hijacked and abused like a pet. Fortunately, Reyna and the other cast members deliver the evening with an unswerving dedication that seduces the audience into playing along.

Bartmon is fine as the mysterious woman with a social conscience. But, again, she is working with two actors who, tragically for us patrons, simply are not seen enough on local stages.

Clement has a range of comic personas that can morph from woebegone to wheedling, effusive to abusive, all of them barely masking the calculating clockwork of a manipulative user. We’d tire of praising Quiroga so thoroughly if only directors would cast him more often. He inhabits every role whether it’s a furious brother-in-law, a vain stage director, a lonely fry cook or a cowardly callous journalist. Lazy Fair gives him a chance to show his comedy chops as the more hapless of the trio who is awash in doubt about virtually everything.

Reyna the Director obviously knows the material but he has brought his cast into sync with Reyna the Playwright’s idiosyncratic aesthetic. He had inculcated them in the way to speak his halting banter while still making it sound smooth and natural. Confined in the tiny Sandbox space at hosting Miami Theater Center, Reyna still keeps all the actors in motion much of the time to break up the dialogue-heavy evening.

Armed with a tiny budget, Mad Cat’s staff does an admirable job including founder Paul Tei’s costumes, props and set design; Melissa Santiago Keenan’s lighting and especially Matt Corey’s sound design from the atmosphere-setting music to the sound of bodies being strangled and dropping to the floor.