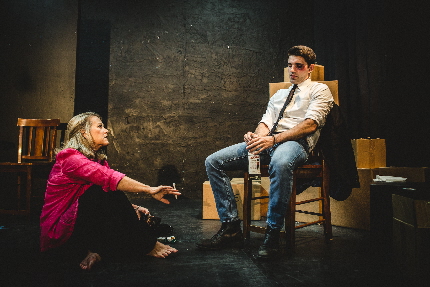 Stop what you’re doing. Really. Go online right now and reserve tickets to see Ground Up & Rising’s harrowing and moving Vincent River, inarguably one of the best productions of the season.

The scrappy Miami troupe performs in an out-of-the-way warehouse or the ballroom of a botanical garden; their finances make a shoestring budget look flush. But over and over, the thematically ambitious company has been producing visceral, gritty work during its 10-year history such as On An Average Day, Gruesome Playground Injuries, 9 Circles, Dying City, Jesus Hopped The A Train and The Hate U Gave: The Tupac Shakur Story.

And now, Vincent River, a kind of mystery about a fatal gay bashing whose secrets most of you will see coming from almost the opening minutes. But the journey getting there is the virtue of the drama as two wounded people circle each other warily, clumsily reach out needing something painful and precious from the other, fail each other, fulfill each other, hate each other, love each other, all in a dance of human relations.

Artistic Director Collin Carmouze masterfully guides Beverly Blanchette and Robert Johnston in bravura performances that eclipse anything we have seen them do before.

But it is, on reflection, a somewhat straightforward story. What makes this script unusually worthwhile is Ridley’s unblinking honesty in depicting everyday people coping with extraordinary grief and guilt, and what makes this production transcendent is the similarly courageous emotional commitment of the Johnston-Blanchette-Carmouze trio.

The plot is sketched out in a synopsis in the playbill, but it does give away one spoiler and we’d suggest not reading it if you can resist. We’ll tell you this much: Anita is the mother of a 35-year-old man who was savagely murdered 18 weeks ago outside a cruising spot for gay men. As the play opens, she spots a teenager outside the apartment that she is moving into and calls him inside when she sees he has a terrible black eye.

This is Davey, a 16-year-old who it turns out discovered the body of her son, Vincent, while walking his fiancé home. Davey is haunted by constant reminders of the sight of Vincent’s mutilated body. He has been shadowing Anita and finally found the courage to ask her help in exorcising the vision. He tells her that if Anita can give him varied details of Vincent’s life and backstory that he might be able to banish the ghost.

Anita, a 53-year-old seamstress, hides her profound damage under a veneer of gallows humor and pointed nonchalance. Already a neighborhood pariah for birthing Vincent out of wedlock with a married factory supervisor, she now has been chased out of her home by the tabloid coverage of his death. Her apparent surprise that her son was gay has left her with unnerving questions about the beloved offspring that she did not know as well as she thought – and therefore, whether she was as attentive a mother as she might have been. To obliquely come closer to the real Vincent, she achingly needs to know every detail of how he was found, what the scene of the crime looked like, what the body looked like. Davey can give her that.

They ask each other probing questions like prosecutors or hypnotists, eliciting reveries in which each relives the past for their audience of one. Obviously, neither is being honest with the other (Davey starts out claiming to be 17.) But the layers of truth appear as each tells story after story in a push-pull prickly evening played out in continuous real time. While they are bound together by the tragedy, they do not bond. This is not often a touchy-feely nurturing relationship, least of all a surrogate parenting one. These people need something from each other that is akin to forgiveness but not quite because they feel their shortcomings are unforgiveable.

Carmouze, also an actor with the company, stages the play with care and skill. The pacing is generally slow, just as you would expect when two people are feeling their way around in a minefield on a starless midnight. The actors are allowed to breathe and find the characters’ thoughts rather than just emote the next line in the script. He moves the actors around enough to keep this very talky play from feeling static. With just a flat stage to work with, he still varies who is the prominent speaker by having someone sit on the floor while another is standing or having someone fade to the background.

But his real accomplishment is what he has wrenched out of these actors working at the top of their game.

Blanchette, a veteran local actress, has needed a role worthy of her talents since retiring as dean of theater at the Dreyfoos School of the Arts. She has it now and she makes the most of it. Her Anita may seem externally an almost stereotypical British prole, but Blanchette, Carmouze and Ridley make her anything but. Blanchette creates a multi-level, multi-faceted creation who is intelligent and intuitive. She initially seems so anesthetized by the tragedy that she has become unfeeling, taking cover in flip humor. But millimeter by millimeter, Blanchette reveals the depth of Anita’s pain. Eventually, the actress gets to show us the entire gamut of human emotion as the protagonists poke and pry at each other’s wounds seeking truth.

From his opening moments as a seemingly typical but troubled teenager, then to his shattering marathon aria near the end of the play, Johnston gives a superlative performance, although he burrows so deeply into the reality of the character that it never seems like an actor at work.

His Davey is by a score of turns sometimes suspicious, caring, angry, respectful, needful, arrogant, compassionate, on and on, all displayed unbidden on his soulful face. In each case, Johnston dives deep into Davey’s being and brings up a pure emotion that resonates with anyone watching. We’re just guessing that he and/or Carmouze has had dance training because this Davey is so physical; his body language, his gestures all communicate the turmoil inside. It doesn’t hurt, of course, that he has a sexy lost puppy dog look.

Both actors deliver convincing working-class accents and maintain them flawlessly throughout the evening. Blanchette’s singsong is a little wearing after a while, but that’s still the accurate sound. Johnston’s is dead-on to the point that some of the words get lost in the teenager’s mush-mouth – a minor problem since Ridley writes in the authentic lingo of these characters’ environment.

Ridley has written screenplays, numerous children’s books and plays, but also theater pieces that explore dark places. Currently, his 2005 Mercury Fur is playing off-Broadway, described by The New York Times as “a group of semi-feral teenagers scrape out a living organizing parties at which clients indulge their most depraved and violent fantasies.”

But this journey, full of tears and, surprisingly, laughter, is written with compassion for these crippled souls and, by extension, all of us.

Note: The Artistic Vibes venue is north of the Falls Shopping Center, but it’s difficult to find so Mapquest it before you go and give yourself a few extra minutes to locate it.

Vincent River from Ground Up & Rising plays in two locations: Aug. 29, 30 and Sept. 4 at Artistic Vibes, 12986 SW 89th Ave., Miami, with performances at 8 p.m. Friday and Saturday, 2 and 6 p.m., Sunday. Also plays Sept. 5, 6, 11 and 13th   at 5 p.m. at the Miami Beach Botanical Garden, 2000 Convention Center Dr., Miami Beach. Runs 1 hour 45 minutes with no intermission. Tickets for the performances at Artistic Vibes are $20 general admission, $15 seniors, free for those under 25. Performances are free at the Botanical Gardens. Also there will be a free performance at 2 p.m. Aug, 30 for the deaf and hard of hearing community featuring ASL interpreters. Call (305) 562-5849 or visit www.groundupandrising.org or http://tinyurl.com/ohw4ztl.