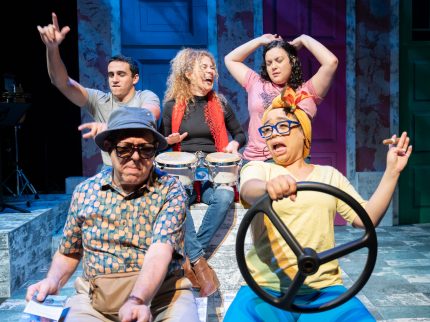 The concepts of home and homeland—especially when they are no longer the same place—have always been complicated for Cuban-Americans. They have become even more complicated in the 21st Century as generational evolution divides those who left their country by force, and their children and grandchildren who have willingly assimilated while ever reminded of their family’s precious past.

Hannah Benitez’s world premiere GringoLandia commissioned by Zoetic Stage is a gentle comedy of a road trip in which a Miami family visits Cuba with episodic misadventures echoing a milder National Lampoon’s Vacation and a procession of quirky characters worthy of Alice’s trip through Wonderland.

But woven integrally into the copious comedy of strangers in a strange homeland are highly different internal struggles.

Carlos Alvarez is a classic middle-class Kendall father seeking an actual physical and metaphysically healing heirloom from places he grew up in Havana and Santiago. He only has the lightest trace of an accent, wears a tourist’s flowered shirt and fanny pack, and once calls his son a schmuck.

But he was a boy when his family was oppressed by Castro and fled Cuba. He warns his son, “Here are consequences to making mistakes in a place like this.”

Danny is a buff straight-out-of-a-South-Beach-club son in his mid-twenties with no plans for the future, whose parents never taught him Spanish and who feels little emotional connection to the country or its past. It doesn’t land when his father, looking at a home the family once had, decries that this would have been Danny’s inheritance.

Michi is a progressive inquisitive daughter working three survival jobs, striving to make a career as a musician, who taught herself Spanish but who knows little of the reality of her father’s world other than what he has repeatedly told the children.

With the relaxed rules of recent years, the family travels to Cuba, for some a hoped-for homecoming, for some as a vacation of curiouisity. But as one of the local denizens lets them know, they are not true Cubans no matter their connection. They are gringos. Even searching underneath the persisting horrors of the Castros and the cracked neglected exteriors of the structures and infrastructures, this is not the Cuba that Carlos has nursed in his mind and venerated.

Benitez, an accomplished playwright and actress memorable locally for Main Street Players’ Bad Jews, has created an engaging and intriguing evening that deftly weaves character-based comedy, a bit of television family farce, and threads of deep and informed insight — perhaps one scene too long.

Some of the humor comes from the collision of cultures and expectations: It’s doubtful you’ve heard dialogue that contains the words Coca-Cola and Chlamydia in the same sentence. Did we mention that sexual overtones pop up frequently, as well as a bit of nudity?

A lot is inserted by Stuart Meltzer’s assured direction, especially a cornucopia of visual and physicalized comedy suffused throughout, down to Danny toweling off and getting dressed.  While we’re talking about him, Meltzer once again melds a cast of presumably different acting approaches into a consistent cohesive singular style that comfortably straddles that comedy-drama dichotomy in Benitez’s script.

But amid the laughs, Benitez creates the specific sense of a generation of Cuban-Americans trying to figure out where they stand in the Cuban zeitgeist.

At one point (minor spoiler alert) Michi discovers that Danny had sex with a young prostitute on their first night in Havana, even though he regrets his actions for multiple reasons.

MICHI: Our family escapes this place, and then you come back, decades later, piled with privilege, and you fuck it?
DANNY: I know what I did was wrong Michi…..It’s like….at home, I never feel like I’m on top. Like I got money or…. But here…compared to everyone….and when I was there with her…she made me feel like I….was on top.
MICHI: You know what gusanos means? Worms. Some of the Cubans here, the ones who believe in the revolution, they call families like ours, the ones who fled Castro, gusanos, worms. So the worms left right? And they’ve come back as butterflies……but I don’t think we’re butterflies yet Danny. You’re a worm. I think we’re all still worms.”

Understandably, Benitez’s local residents speak Spanish most of the time, which Carlos and Michi have to translate for Danny. But it’s a shrewd dramaturgical stratagem: Anglos like this writer feel just as at sea as Danny, and it also underscores the cultural disconnect that Carlos and Michi feel. Meltzer’s physicalized direction and the actors’ intonation make most of the meaning clear.

With regional theaters across the country recommitting to telling stories about the uniqueness of their community, GringoLandia—a universal story of immigrants we should all be able to relate to personally—is a tale that likely gains even louder resonances for audiences in this region.

“He was a murderer and a piece of shit and he threw my father in jail, twice! Twice! He threw my father in prison and we almost had to leave him behind!!!…. And you know I bet you’re all LGBT whatever and you have all your genders all over the place but I tell you what—one of the first things Ché did when he got here was have the gays executed by firing squad and now his face is merchandise which is exactly what he was ‘opposing’.”

The cast, most with Miami connections, may be playing theatricalized characters who are inherently funny, but every single one finds Benitez’s underlying truth of these human beings.

James Puig, a New York theater veteran with appearances in Miami New Drama productions, is marvelous as Carlos, able to elicit broad humor worthy of a sit-com and then in the next scene create the touching portrait of someone desperately yearning to unearth and honor his beloved past in a far different disoriented present.

Alicia Cruz makes Michi a perfect stand-in for a generation conflicted in how to deal with their inherited culture and the reality of living in America in 2022.

Gabriell Salagado, who stunned audiences a few months ago as the title creature in Zoetic’s Frankenstein, once again works with Meltzer to physically inhabit a role, this time with hilarious results, as well creating a heedless Gen Z-er.

Last but not remotely least, Stephanie Vazquez, a New World grad like Salgado, morphs effortlessly among 10 characters encompassing a 14-year-old hooker to a wordless stern nun to a wily countryside doctor to a drunken cab driver.

The production opens with an extended warm-up performance by Yarelis Gandul, a percussionist who encourages the audience to clap along with her conga drumming a bouncing salsa beat. Besides playing during scene changes, she inserts sound effects notably as clicking of sticks to represent the insistent call of Carlo’s memories.

But especially effective at enveloping the audience in the environment are three large screens above the set—bordered by weather-beaten shutters—that feature crisp film footage of the cityscapes and countryside. Uniquely, they depict the characters’ view if they were to look around them on all three sides. This film with moving elements showing the east and west of the same street as if you are standing in an intersection, and showing the countryside on either side of a car whizzing through the landscape. The footage was shot pre-pandemic on a trip to Cuba by Meltzer and Salgado.

The costume design by Marina Pareja could provide a textbook course in illustrating how what people wear speaks volumes about who they are, their social status, their thinking, their culture, their place inside a culture.

As the evening reaches its climax, the humor ebbs away, and we are left with questions about the nature of cherished dreams and the knowledge that the past is past, except honored in our memories.

Side note: Once again, the Arsht has declined to give out playbills (Covid? Cost-savings?) and resorted to asking people to scan a QR Code on their phone (assuming they brought one and have any idea how to work a QR code) to see who’s playing who and who designed those terrific costumes.

So to repeat the editorial comment we wrote about this last time:

I hate, absolutely hate the new trend of forcing technology-impaired people like myself to attempt – not succeed, but attempt – to download the only available playbill on a cellphone. First, not all of us are cyber-adept. Second, you can’t check the cast list during the performance when you ask “who is that actor.”  Third, you are more likely to “forget” to turn off you phone when the lights go down because you were reading the playbill. Fourth, most theater lovers who have been going to shows way back in 2019 treasure the physical playbills as a souvenir they keep for decades — which given ticket prices these days is the least producers can give you. And just for what it’s worth, Actors Equity is not requiring this move as anti-COVID measure.

Covid protocol: Masks required in the lobby and auditorium. Proof of vaccination or recent testing must be shown at the door along with ID before security wanding. The totally non-paper ticketing means that tickets are sent by email or text to your phone (even if you get them from the box office) and that electronic ticket is what must be shown to the ticket scanners at the door; they cannot scan a paper printout. 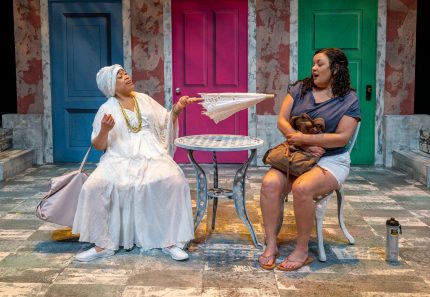