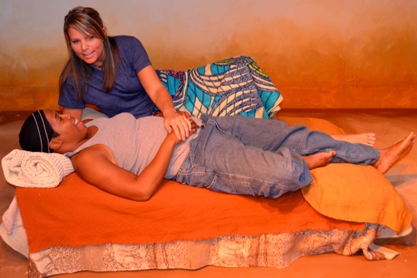 Thinking Cap Theatre’s production of Nick Hadikwa Mwaluko’s Waafrika is a deeply earnest and illuminating if imperfect examination of the toxicity of tradition. But even Waafrika’s flaws are washed away by one of the most harrowing finales seen on a local stage.

The arc of this tale is a tragedy, and we won’t give away the cringe-inducing denouement, but you’ll likely see it coming. That doesn’t rob it of an iota of its power as staged by director Nicole Stodard.

Set in rural Kenya in 1992 when homosexuality really dare not speak its name in the face of centuries of stringent social mores, Waafrika focuses on Awino, the daughter of a village chief agonizing over conflicting pressures. She is wrestling to reconcile her physical and emotional love for a white female Peace Corps worker and the unyielding prejudices of her family reaching back through uncounted ancestors.

“There are new questions living inside me,” she tells her father about living with the American woman, wearing men’s clothing and opting for a boyish haircut. “I hear two voices at the same time.”

After lying to her father about not having made love to her “close friend,” she explains to her lover , “Every time we have sex, it means I am not worthy” to be buried in the family graveyard. She is a child of her culture and her time.

Awino speaks of searching for her identity, but the truth is she knows her sexuality. Her crisis is how to honor the truth of who she is in a society whose matriarchs suggest the solution to such abhorrent feelings is to circumcise her, a barbarism they describe in blunt detail.

Mwaluko, an artist-in-residence at Thinking Cap which produced his S/He in 2010, is a transgendered man born in Tanzania but who grew up in Kenya, covered upheavals across the continent for Reuters news service and then emigrated to the United States. His own experience as a man born into a woman’s body deepens his insight into a person struggling to find their identity.

Among his gifts is a skill for creating rich, musical speeches for the African characters. He melds a rural vernacular with a lilting poetry that reflects a millennia-old symbiosis with the land beneath their feet. It is so lovely that the American’s speech seems blunt, out of place and even unconvincing, even when he gives her similar lines.

Woven throughout is the tribe’s clinging to the life raft of tradition with an intensity reminiscent of Tevye’s “Because of our tradition, everyone knows who he is and what God expects him to do.”

The pungency of Awino’s dilemma is rooted in the affecting central performance of Makeba Pace under Stodard’s guidance. Pace exudes the sense being ripped apart like someone being drawn and quartered by wild animals. While she embraces the new Africa that is emerging, Pace’s Awino also respects the roots of a culture whose traditions have been inviolable for centuries. Pace’s reputation exploded locally with her stunning turn as the agonized wife of the title character in M Ensemble’s King Hedley II last year. Once again, she proves herself as an actress to watch for.

Matching her anguish is John Archie as her father, the chieftain equally trapped – in his case between his conviction in his tribe’s ethos and his profound love for a daughter who has chosen a lifestyle he cannot accept. Among the production’s strengths is Archie’s completely credible depiction of a human being writhing in an insoluble dilemma. He and Pace also create the feeling an authentic bond of abiding love.

Kim Ehly imbues a sincerity and patient understanding into the altruistic American refugee from a privileged background. But Mwaluko has given her the least convincing lines and her scenes don’t always land truthfully. She does create an admirable chemistry with Pace crucial to making their scenes work.

Rounding out the cast are Carey Brianna Hart as the vitriolic first wife of the chief, and Renee Elizabeth Turner and Stephon Duncan as two other wives.

The script and its execution do stumble on occasion.  It’s not apparent on stage why Awino makes the decision that leads to the finale, although after-show discussions can produce likely possibilities. It’s not even absolutely clear whether she’s alive at the end.

The other serious failing is that Stoddard, Pace, Ehly and Mwaluko stumble over the hairpin turns in plot and emotional direction. For instance, for most of the first act, Awino is consumed with self-doubt over her sexuality and her community’s inability to countenance it. But the moment she begins to make love with her partner, pleasure instantly and uncredibly erases every shred of angst. Similarly, the couple tunes into the radio just as a very convenient report announces the government’s arrest and prosecution of two gay leaders. The couple instantly spins into panic mode. And just then a violent public backlash against homosexuality erupts offstage outside the couple’s apartment. It all feels conflated and contrived.

Other than Archie, it’s also a little difficult for these contemporary American actors to sell to an “enlightened” 21st Century audience what are inarguably accurate tribal sentiments. One of the chief’s wives tsk-tsks that the chief had Awino educated rather than married her off as breeding stock. “What good is a girl in school?” she says. “It’s a waste of resources.” Actually, the line does echo Li’l Bit’s grandfather’s comment in How I Learned to Drive about ”How is Shakespeare gonna help her lie on her back in the dark?”
Mwaluko is not completely unsympathetic to the traditionalists. He has that same hide-bound character reference the fight for independence from the British. “We fought so this generation would not have to.”

This mixed bag of virtues and deficiencies still results in an intriguing evening of theater that speaks directly to the audience’s experience with struggling to be true to themselves in a world that is too slow to change.