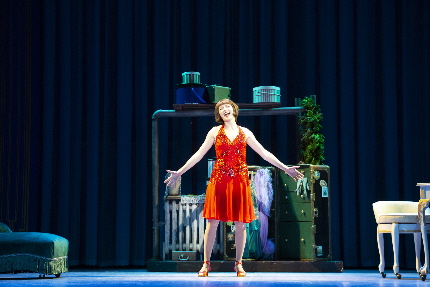 Riverside Theatre puts a new shine on old tropes in its snappy and vibrant production of Thoroughly Modern Millie.

The entertaining musical may have the look and feel of something right out of the ‘20s, but it’s a new one. The stage musical popped onto Broadway in 2002 and is based on the 1967 George Roy Hill movie starring Julie Andrews. The stage musical has a book by George Scanlan and Richard Morris, who wrote the screenplay.

Still, given the big dance tap numbers, roaring ‘20s setting, boy-meets-girl plotline and just awful, cringe worthy racist stereotyping of Chinese characters, didn’t Howard Lindsay do this something like this already in the ‘30s? No, that was “Anything Goes.”

Thoroughly Modern Millie follows the frivolous and fun exploits of Kansas-bred Millie Dillimount, who has moved to New York City to find a rich husband. Saying she wants to be a modern girl, she rejects the idea of love and sets her mind to find a secretarial job so she can marry the boss.

Millie checks into the Priscilla Hotel for Single Women, soon makes a best friend, Miss Dorothy, and finds a job with a handsome boss, Mr. Graydon.

The romance part of the comic plot becomes entangled when Mr. Graydon falls for Miss Dorothy; and Jimmy, an earnest young man, falls for Millie.

Lurking in the background is the hotel proprietor, the mysterious Mrs. Meers, a white woman who disguises herself to look and sound like a Chinese villainess from a 1930s B-movie. She makes extra money by supplying a white slavery racket with young orphaned women living in her hotel. Speaking with caricature accent, she intones “Sad to be all alone in the world.” She forces help from two Chinese men, Ching Ho and Bun Fu (who work in a laundry).

So, yes, a thoroughly modern audience may wonder about jokes feeding at the trough of glass ceilings, ethnic stereotyping and sex trafficking.

But really, there’s not a moment in this zippy show where your modern mind will have a chance to ponder. From the first downbeat of the overture to the final curtain, you will be won over by a talented cast and design team who deliver a winning, fun-filled show.

The music, like the story, is old and new. Composed by the acclaimed Jeanine Tesori, who won a Tony Award for Fun Home,  peppy 1920s inspired melodies and mix with classic tunes, delivering some brilliant musical moments. Gilbert & Sullivan’s “My Eyes Are Fully Open” is the tune and tempo for a rousing typewriter number; Victor Herbert’s “Ah, Sweet Mystery of Life” proves a perfect musical motif when Grayson and Dorothy meet; and Tchaikovsky’s “The Nutcracker Suite” adds classy undertones to a speakeasy scene.

In fact, the music is so big and wonderful, it becomes the canvas for some sensational spectacle by director/choreographer James Brennan, who has grown into a Riverside favorite.

His remarkable ensemble dances through choreography stuffed chock full of gestures. From flipping of the hand and tapping while seated to akimbo kicks and arms flung upward in joy, Brennan uses every part of the body and the entire stage for a most satisfying abundance of dance.

Moreover, his scenic shifts are inspired. Working in concert with lighting designer Julie Duro, moving lights are projected onto the stage while Michael Schweikardt’s excellent scenery is changed. Keeping the featured characters in front of the scenery, the shifts become tightly timed “carpenter scenes,” keeping the pace bustling along.

Abby Church is a wonder as Millie. Bright faced and cheerful, she is a singing and dancing joy while at the same time bringing the romance and comedic touches. Patrick Mobley, who was Gabe in Riverside’s Next to Normal, is very appealing as Jimmy, the young man who falls for Millie.

Matthew Hydzik makes an ideal Mr. Grayson, Hydzik, who was on Broadway as Gregg Allman in The Cher Show and Tony in West Side Story, has great fun with Victoria Britt, who turns up the innocent, wide-eyed appeal as Miss Dorothy. Together, they hit the big notes with thrilling ease.

Anthony Chan brings such sweetness to his role of Ching Ho, a Chinese immigrant who falls in love and helps protect Miss Dorothy. Like the rest of the featured cast, Chan has a solid list of professional credits, including working with Barlett Sher and Lin Manuel-Miranda and appearing in multiple roles in Vietgone, an important new American play.

Carl Hsu is Bun Foo, who, like Ching Ho, is desperate to get their mother out of Hong Kong and bring her to New York City. Hsu and Chan bring out the comedy in musical numbers with Chan, who sing and speak in a mix of Mandarin and Cantonese, with supertitles translating.

Adinah Alexander, who has been in numerous original Broadway casts, is a drop-dead hoot as Mrs. Meers. She delivers nuanced jokes like asides between her and the audience, shimmies between the intentionally hackneyed Chinese accent into a tough Brooklyn “broad” talk. And, when her character reveals that she used to trod the boards (theater speak for “act”), she turns up the droll factor when saying she could still play Juliet, if the house was big enough.

Nicole Powell, who also has a long line of credits on Broadway and in television, is a show-stopper as singer and wise socialite Muzzy Van Hossmere. And she knows how to wear and use those fabulous gowns, designed by Kurt Alger, oh, so very well.

Music director and keyboardist Ann Shuttlesworth leads a solid 11-piece pit orchestra. Duro’s rich lighting brings out the vibrancy in Alger’s costumes. And Schweikardt’s scenery has that high sophisticated Broadway appeal where a few beautifully crafted pieces slide easily on and off to set mood and place.

This is a first-rate, polished, professional production. You would be hard pressed to find better.