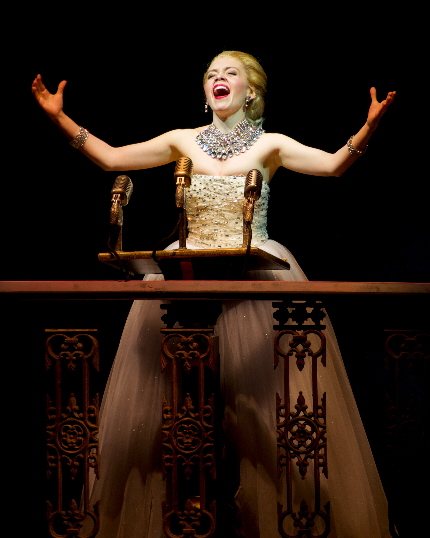 Okay, later we’ll get to the surprisingly strong performance of an America’s Got Talent semi-finalist in the title role; more importantly, the Wick Theatre’s production of Evita is a painful reminder of just how current the 1976 Tim Rice-Andrew Lloyd Webber work remains as a cautionary tale of faux populism harnessed by unscrupulous power seekers.

Lyric after lyric, scene after scene, especially Juan Peron whipping up a crowd with an insistent chant, could have been downloaded from the nightly news.

There is the chilling quatrain:
How annoying that we have to fight elections for our cause
The inconvenience, having to get a majority
If normal methods of persuasion fail to win us applause
There are other ways of establishing authority

Or
How can you claim you’re our savior
When those who oppose you are stepped on,
Or cut up, or simply disappear?

Or when a politician says to Evita, “Statesmanship is more than entertaining peasants.” To which Evita snaps back contemptuously, “We shall see, little man.”

Evita is being played in evening performances by Colombian-born Miamian Daniella Mass who used a bilingual “Don’t Cry For Me Argentina” as her final offering when she appeared on America’s Got Talent in 2015.

With experience singing in concerts from opera to jazz, Mass delivers an angelic multi-octave coloratura soprano (a necessity to conquer Webber’s sadistic requirements) infused with an impassioned but controlled non-melisma style that slides throughout her registers, plural. The only time she breaks with that is a very Broadway button to the line “a touch of star quality,” which she does twice. Her hint of an accent gives the part some extra authenticity, although sometimes she slurs her words.

Reportedly, Mass has never performed live on stage in a play or musical which might give most ticket buyers pause. To be fair, the part of Evita requires some acting talent but, as a primarily sung-through piece, it doesn’t require an actress be able to deliver Medea or even Dolly Levi. But the decidedly petite Mass is present in every moment and her expressive round gamin face is emoting throughout without going over the top, sometimes enhancing the proceedings with nicely nuanced reactions. It’s likely that her acting performance was significantly molded by director Norb Joerder. Regardless, the final result is effective although it seems to be holding back a tad on the power inherent in the character and the score, perhaps intentionally.

Note: Evita will be played at matinees by Kristina Huegel, an experienced musical theater hand who was last seen at the Wick in Beehive. (Totally off-topic: The Wick is one of the very few companies in South Florida who has understudies for all of its primary leads.)

Sean McDermott, who was a dynamic and comic Pirate King in the Wick’s Pirates of Penzance, disappears inside the morally curdled opportunist Juan Peron. McDermott and Mass nail the almost sexual mutual seduction of two manipulative users who recognize each other for who they are, meaning what they can do for each other, and who are, from the first, unapologetic calculating hypocrites 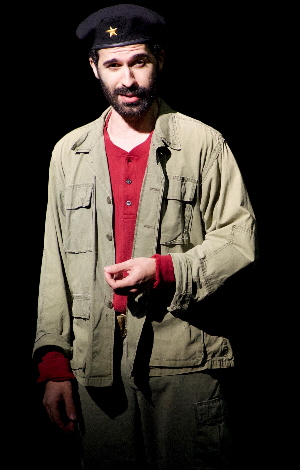 The part of Che is also more vocally demanding than audiences realize with numbers written mostly for a high almost Irish tenor but with low deep notes required as well. Fortunately, the Wick hired Michael Focas, a local talent who just finished The Mystery of Edwin Drood at the Maltz Jupiter Theatre. He has the acting and singing chops to hold the audience as its sardonic guide and commentator through the story. All of the characters are cursed with Webber’s insistence on twisting a musical line somewhere other than where traditional musicals go instinctively, which some fans adore but actors must hate. Focas handles this as well as any of his castmates.

Frank Francisco, recently in MNM productions, is an appropriately smarmy Magaldi, and Samantha O’Donnell is the forlorn mistress. Backing them up is a 26-member ensemble of solid singers and dancers whose very number gives weight to the score and the staging.

Joerder, a reliable hand helming musicals, once again keeps the evening moving with smooth staging. He has kept some of original director Hal Prince’s iconic visions such as the game of musical rocking chairs in “The Art of the Possible” and the marching in squares of the elite and the military. But much of the work is his own.

Nods are due musical director Darren R. Cohen who melded the cast into the unforgiving but full-throated recorded score. Stephen Casey’s choreography was fine, especially the sultry tango executed by the sensuous Emily Tarallo and Dequan Mitchell. The costuming overseen by Jim Buff was note perfect. Much of the changing scenes was due to Jose Santiago’s lighting and the considerable use of newsreel footage and archival photos projected above the playing area by Josieu Jean and Len Pfluger.

Those who have seen a few previous productions might perceive that this edition seems a tad shorter; indeed, this script being licensed reportedly is tweaked from the original, although it includes the song “You Must Love Me,” originally added to make the film eligible for a Best Original Song Oscar.

But no one needs cry for this production. 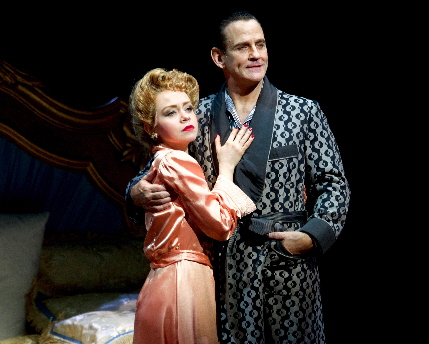