Top Gun! The Musical in FTL Crashes and Burns 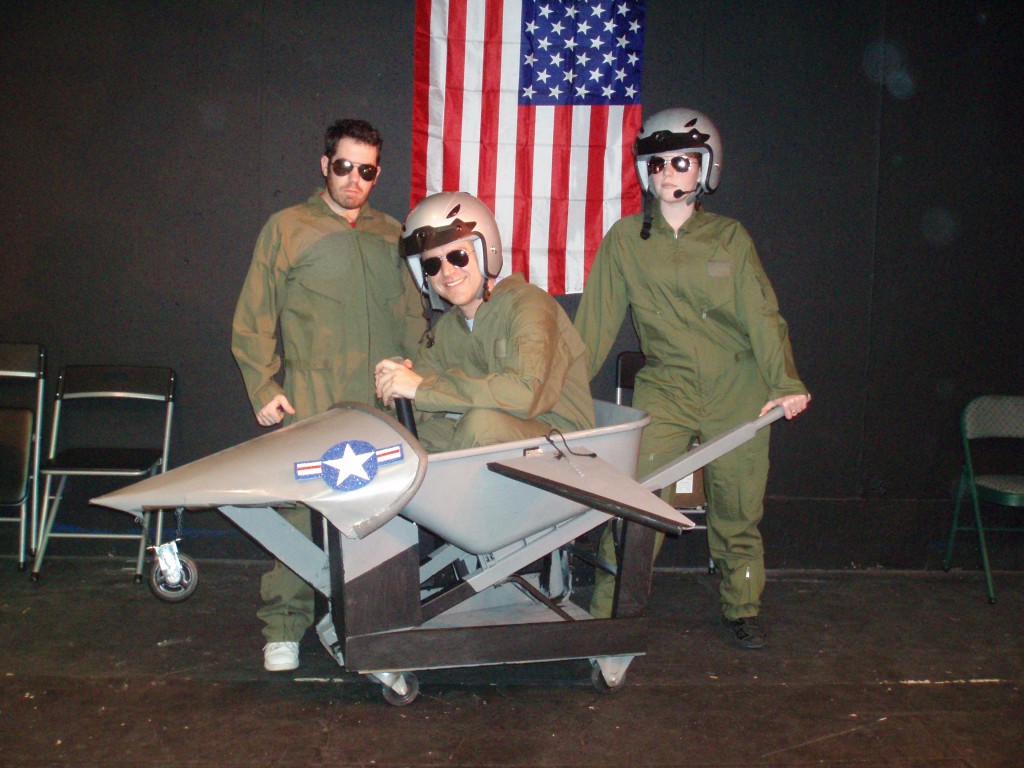 Top Gun! The Musical might sound like a bad joke: How does one bring the iconic Tom Cruise film to the stage, as a mega-musical? Punchline: Not very well.

That’s the premise of this pseudo-parody, which debuted a decade ago at the Toronto Fringe Festival. Jack Gardner, who served as musical director of the show’s Dallas premiere in 2006, is now directing the local premiere at Empire Stage in Fort Lauderdale.

Top Gun! The Musical is a show within a show about a harried director named Billy (Todd Storey) and the cast of actors hired to bring the iconic 1986 fly-boy flick to the stage. His cast is made up of stock character clichés who don’t have names outside of their Top Gun characters.  There’s Maverick (James Lott) a clueless leading man, Charlie (Kelly Kopf) the talentless leading lady who slept her way into the job, and Iceman (Christopher Michaels) a drama queen with eyes for his dumb-as-a-doornail Maverick.  The clichés continue with Wendy (Christie Oliver) a devoted assistant in love with the director, and The General (Gisbert Heuer) a German producer with shady overseas investors more interested in box office than his director’s artistic vision. For some reason that is never explained, the role of Goose, Maverick’s wing man, is a gender-bender played by pretty, titian-haired Lindsey Johr.

Even though Top Gun! The Musical gets off to a promising start, with Goose pushing Maverick around the tiny stage in a cockpit that appears to have been fashioned from a wheelbarrow, singing the catchy song “We’ve Got a Plane to Catch” an opening number designed to give exposition about Maverick’s dead daddy issues, Top Gun! The Musical quickly takes a nose dive. There is no plot to speak of; the cast simply recreates/parodies various scenes from Top Gun, while dealing with typical backstage dramedy.

Top Gun! The Musical, with music by Scott White and book and lyrics by Denis McGrath, has a campy, fun vibe and, with some work, could turn into a cult circuit favorite. Of course, the writers would have to figure out whose story they’re telling and introduce the conflict sooner than the second act.

And it would need a strong director and cohesively talented cast in order to make it work. Unfortunately, this production lacks both, and the promising material is a victim of sloppy execution.

This is amateur hour at its worst.  The amateurish vibe even extended to the opening night audience, many of whom knew cast members, and used their phones to take photos and shoot video throughout the performance.

Where to start? Perhaps with the lack of timing from the majority of the cast or the recitation that passes for delivery, or maybe that during the ensemble songs, each cast member seemed to be singing in a different key. (And get this — they’ve recorded a cast album, which will be available Feb.23.)

The exception to all of this is Michaels, who is a pleasure to watch. His performance injects his character with some personality and back-story, transcending the Iceman role to show the actor playing the character as a world-weary theatre gypsy who’s seen many big breaks fall through. He’s especially funny when he’s trying to introduce a little homoerotic bromance into the storyline. Ironically, Michaels stepped in for an ailing actor, and only had six rehearsals before opening night. He’s going to be replaced after opening weekend by Laurence London, who has a pretty big flight suit to fill.

As for the other actors — and that word is used very loosely — Storey recites his lines and never comes close to embodying the urgency of his character, a director who desperately needs a hit after three flops, including Apocalypse Wow and Die Hard! The Musical. Storey won’t be in the show for the Feb. 17 and 18 performances, when Tommy Paduano will step in.

Oliver seems like a promising performer with a decent voice, but lacks stage confidence and can’t project. Many of her lines are inaudible in the back of the theatre, which in this case is the third row. Johr’s main attribute is her voice, and she loves to show it off to glass-shattering heights, a running joke in the play. Lott is as charisma-free as it gets, a non-descript actor who fades into the background, a baffling choice for cocky Maverick. Heuer gets one of the best songs in the show “Just Put the Asses in the Seats,” but he is a stiff performer and looks uncomfortable throughout his song and dance scene. Kopf is a triple threat: she can’t act, sing or dance.

This production of Top Gun! The Musical suffers from Shoulda Woulda Coulda Syndrome:  It shoulda been cast with performers who could actually sing and act. It woulda had a shot at being a cult hit. And it coulda been a lot of fun, if it were only in more capable hands. But as it is, Top Gun! The Musical crashes and burns.

7 Responses to Top Gun! The Musical in FTL Crashes and Burns