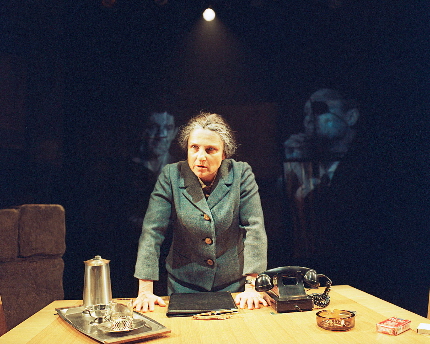 The term tour-de-force is frequently overused to describe any one-actor show in which the performer dons a few personas, modulates their voice and feigns a few emotional pyrotechnics.

To see an example of a true tour-de-force, with the emphasis on force as in the French word for strength, witness the opening salvo of Tovah Feldshuh’s 10th anniversary tour of Golda’s Balcony that kicked off Wednesday at the Parker Playhouse in Fort Lauderdale.

Fiery and ferocious one moment, wracked with guilt the next, here hunched over a cigarette as a dying old woman, there twirling about the stage like teenager, Feldshuh returned to the kaleidoscopic role of Israeli Prime Minister Golda Meir as if she had just left it a few weeks ago.

The late playwright William Gibson (Two For the Seesaw and The Miracle Worker) wrote a version in 1977, Golda, starring his friend Anne Bancroft and a cast of 20, but it failed to catch fire. Then in 2003, he rewrote it as this monologue keyed to Meir’s contemplation of using nuclear weapons during a critical period of the Yom Kippur War. That ratcheted it up it from a bio-play into a contemplation of what happens when idealists gain power and find the power to do good often requires of doing harm simultaneously.

Feldshuh rode the new version to a Tony nomination and helped make it one of the longest-running one-woman Broadway shows in history, directed by Scott Schwartz. With Gibson’s blessing, Feldshuh changed the all the verbs to present tense to ratchet up the immediacy of the piece.

Like an electron careening around a chain reaction, Feldshuh embraces every split-second pivot in Gibson’s script, which swings instantly from dollops of broad humor to passages of soul-crushing pathos and then back again in the space of a minute.

The sole flaw in the script is that time not only shifts between Meir deciding the nuclear questions and past events in her life, but does so with absolutely no discernable rhyme or reason structurally, certainly not chronological. The only flaw in Feldshuh’s performance is that she usually attacks this all with breakneck speed and machine gun delivery – which makes it very difficult to follow for audiences unfamiliar with the politics, the personalities and the period. On the other hand, you can just let the details slip around you like the hypnotic roar of a whitewater torrent. She is such a whirling dervish riding the inside of a maelstrom that you forget that the drama, like most bio-plays, is an unrelieved dump of expository “and then I did such and so” that normally drags 95 percent of these shows into the swamp.

Whether or not Feldshuh reproduces the externals of Meir will vary in the judgment of observer to observer. Lord knows she has done all she could: She wears a wig made of Brillo and an unflattering prosthetic nose, dons a dumpy fat suit including leggings that depict Meir’s legs swollen by phlebitis, and she has that voice. Actually voices. This Golda’s voice mutates depending on her age, but it has the metallic twang combined with steel resolve when necessary and joyfully self-aware side-of-the-mouth topspin when spitting out a joke. To be honest, the accents ebbed as the 90-plus minute show reached the halfway point, then resurged briefly and vanished again.

Doubtless some critic has described Feldshuh’s powerful performance as a runaway freight train, but that would be dead wrong. There is nothing out of control here. The triumph is her meld of passion and skill, both calibrated to a couple of millimeters. The laudable achievement is not that she transmogrified from one emotional state to another, such as elation to agony, and it’s not that she depicted such profound depths of those emotions. That’s the job description. It’s that she did them both at once and you’ve seen few people able to do that. She instantly ricocheted without any buildup of even a few seconds from reaching the bottom of the abyss to the crest of the mountaintop – and made each absolutely credible.

This stripped down but technologically revitalized production features sophisticated projections, mood music and frighteningly lifelike sound effects of cannonade. It’s part of the Broward Center’s WinterStage play series and is co-produced by playwright Matthew Lombardo (Looped and Tea At Five), who lives part-time in Fort Lauderdale. Reportedly, the play is slated to move to Washington,  D.C., and Boston later this year.

The national tour came to the Parker with Valerie Harper on the cusp of Hurricane Wilma in 2005 and was produced by GableStage in 2007 with the terrific Lisa Morgan.

Feldshuh has graced the Parker and other area venues with her solo cabaret shows, her concerts alongside the late Bruce Adler and Tea At Five about Katharine Hepburn. Two days ago, she was swinging from a trapeze singing “No Time At All” as Berthe the feisty grandmother in the Broadway revival of Pippin.

The acrobatics are no less impressive here. Feldshuh, Gibson and Schwartz have produced an energizing, exhausting and finally ennobling evening of thought-provoking theater.

Bad audience report: Numerous cellphones went off opening night. In character, Feldshuh/Meir reprimanded one offender early on, “I can do without that music.” She also paused very briefly as some latecomers noisily made their way to their seats, just the first of many tardy folks. Fortunately, Feldshuh was too deep into the part 26 minutes later when the last couple arrived. (To that couple, if you email me your name and address, I’ll send you a My Little Pony digital watch with a nice pink plastic wristband.)