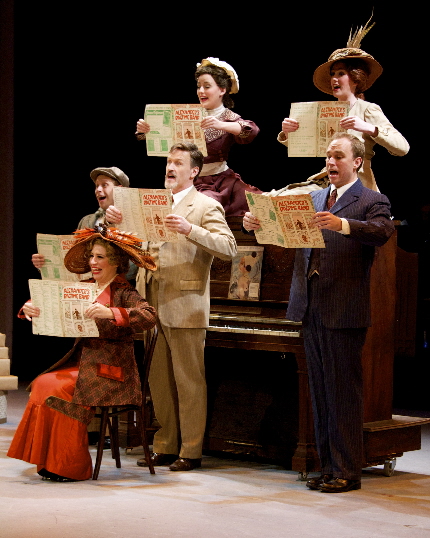 Not everyone is a fan of musical revues, but if you’re going to mount I Love A Piano, that justifiably popular evergreen staple of regional theaters over the past decade or so, this is the way to do it.

The Wick Theatre has gathered a sextet of undeniably talented singer/dancers; gave them first-rate leadership; dressed them and lit them as if this was a full-fledged musical comedy, and backed them up with a live drumhead tight seven-piece band.

It doesn’t hurt that they are singing about 60 tunes from the reportedly 1,500 songs written by the quintessential American composer of popular music, one Irving Berlin.

But the edge is the Wick’s commitment to treating this with all the resources it invested in its earlier productions. I Love A Piano and its brethren are popular with producers as a way to balance out a season’s budget since they’re easy and relatively inexpensive to produce. Corners can be cut from the size of the cast to the size of the band. It’s not terribly hard to stage by competent directors looking for a quick assignment between gigs.

Not so here. Director/choreographer Kelly Shook (responsible for the Wick’s Swing) and resident musical director Michael Ursua have created a visual and aural display that never coasts. Most scenes and songs are presented as narratives that go beyond the perfunctory smiles and rudimentary dance steps that passes for storytelling in similar offerings.

They are abetted by this indefatigable and equally committed cast including Wick mainstays Alex Jorth and Amelia Millar, plus Ryan Patrick Lammer, Caitlin Hornik, Timothy Booth and Karla Shook.

If you have somehow missed this at Florida Stage, Broward Stage Door or one of the many other venues that have produced it, I Love A Piano starts with the discovery in the present day of a 1910 piano and then uses it as a touchstone as we follow it and various owners through five decades of American life as reflected by the pop songs of Berlin integrated into scenes depicting a Tin Pan Alley song plugger’s office, a speakeasy, a World War II USO show and an audition for Berlin’s Annie Get Your Gun.

There’s little dialogue in the concept by Ray Roderick and Michael Berkeley, only a steady flow of Berlin classics plus tunes even some Berlin aficionados might not know.  Berkeley’s arrangements are especially deft giving some songs their iconic setting such as “God Bless America” and giving others a fresh spin such as a melancholy-tinged “Blue Moon.” Some songs get a few minutes of solo time, some only a few lines. But many others are seamlessly melded such as when the performers are sitting in a move theater, inspired to sing and dance to “I’m Stepping Out With My Baby,” slipping into “Top Hat, White Tie and Tails,” giving way to “Puttin’ On The Ritz,” “Cheek to Cheek” and Let’s Face The Music.”

Once upon a time, the director and the choreographer were separate artists, and the level of integration of their work varied. But Bob Fosse, Michael Bennett, Gower Champion and others gave rise to people like Shook. The difference is that actors always move and are moved around with a dancer’s grace and inventiveness. Kelly Shook has ensured that body language and subtle terpsichorean movement that further the slight stories are seamlessly embedded in every moment of a show.

Some numbers are especially memorable. Jorth, a song-and-dance man born a couple of generations too late, leads the crew in a machine gun rendition of “Pack Up Your Sins And Go To The Devil.” Showing Berlin’s quieter side, Karla Shook croons “Russian Lullaby.” Everyone has a piece of Berlin’s love letter to his wife, “Always,” sung here as a pledge by couples being broken up by draft notices. The three woman are mirthful topping each other in “Anything You Can Do” during the audition scene.

One of the more inventive and effective of the Roderick/Berkeley transpositions is also a bit disquieting. Karla Shook does a lovely sensitive job with the lament “Suppertime.” Here it’s a war widow singing she ought to be setting the table for her dead husband.  But when it was introduced in 1933 by Ethel Waters, the song was a wife mourning the loss of her husband who has been lynched.

The production has a polished feel to it from the gorgeous costumes chosen by Kimberley Wick and Allen Wilson to the unusually varied lighting by Greg Solomon to the many scene setting projections by Josieu Jean, all the way down to the better than average props brought along by the Shook sisters who both have done this show before. (A vintage hatbox bears the Saks Fifth Avenue logo).

With such deceptively intricate arrangements, Ursua has done a solid job molding the singers and musicians, such as the smooth three-part harmony on “Lazy” by Millar, Jorth and Booth. Shout outs are due the band that included Dave Wilkinson on bass; Julie Jacobs, drums; Phil Fest, guitar; Doug Michaels, trumpet; Jason Pyle, trombone, and Tom McCormick, woodwinds.

Such shows always feel constructed and artificial, but this less so because of Shook’s staging and the cast’s pizzazz.

Perhaps the ultimate verdict came from various Greatest Generation audience members opening night scattered around the theater who were so mesmerized that they were unconsciously singing along.