Posted on November 9, 2017 by Bill Hirschman 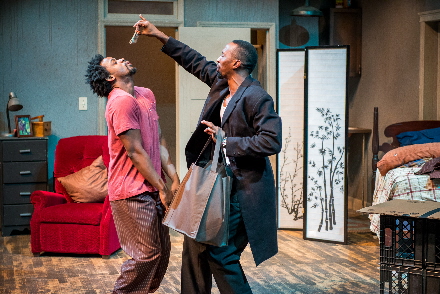 The cat and mouse game in Zoetic Stage’s Topdog/Underdog moves as swiftly and cunningly as the two characters’ dexterity in the shell game, which in this case is three-card monte, a street hustle card con.

Brothers Lincoln “Link” (Eddie Brown) and Booth (Marckenson Charles) are players, born to live their lives trying to stay one step ahead in a world where the cards were stacked against them from the day they were born.

It makes you wonder, what with all the conversation throughout the two hander about the boys being left by their parents when they were youngsters, their father’s philandering ways where he’d take Link along to watch his infidelities unfold; and Booth coming home from school to see his mother “entertaining” the same man, but not their “Pops,” every Thursday.

At this point in their lives, the thirtysomething men just want to find their way. Link has given up hustling cards after he sees a friend shot on the street. He’s got “a sit down job with benefits,” he repeats more than a few times. He works at a local arcade as an Abraham Lincoln impersonator, where patrons pay to re-enact the 16th president’s assassination by shooting him in the back of the head with a cap gun. Maybe he got the job because of his name, and while the color of his skin was an impediment, it’s been cleared up by whiteface makeup.

Booth makes his ends meet by “boosting,” i.e. shoplifting, everything from fine china to top-drawer suits. In the relationship department, both men are struggling: Link’s wife, Cookie, kicked him out, while Booth is courting a woman named Grace, yet resorts to pornographic magazines to satisfy his desires.

The two actors (New World School of the Arts grads with Equity resumes under their belts) heap layer upon layer on the characters’ personal stories, but with such tender loving care to Parks’ narrative that it’s never dulls, only getting more absorbing as the details unfold of how they’ve arrived to this place. Parks leaves it open-ended, describing her play as set in “Place: Here” and “Time: Now.”

There’s a rhythm inherent in Parks’ play that an astute director will carry throughout, and it’s what gives Zoetic’s Topdog wings. Director Stuart Meltzer gets the groove, and has it built into everything – from the way the actors move around the stage, to the beat of the music-backed projections that stream in video on the apartment’s second floor – Greg Duffy’s vintage Las Vegas casinos, card games, and people hanging around on neighborhood corners. There’s the rat-a-tat lingo of the street beat that Link and Booth use in their monte swindle, the one upmanship of big brother and little brother, the dynamic of the old motto: “keep your friends close and your enemies closer.” It all comes together to draw you into the minds, and what matters, to these modern-day Cains and Abels.

True to the title, and even truer to the understanding that the director and his actors have of this play, top dog switches to underdog and vice versa to create drama in crucial moments, and it’s done so subtly, yet so effectively.

Michael McClain’s set fills the Carnival Studio Theater of the Adrienne Arsht Center as the brothers’ ramshackle world. The two-story boarding house is shown in complete exterior, its windows tacked with haphazard boards, and a brick façade decorated with graffiti. When the lights go down, there’s the big reveal. It’s Booth’s rundown one room, living space that the two share. Link sleeps on a ripped recliner. Booth has the bed, a two-poster twin, which, no doubt, has been salvaged from Goodwill. As the dynamics zig-zag between the two, somehow the square bedroom feels as if it could double as a boxing ring.

This is already one of those must-sees, and it’s early in the SoFla theater season. Chances are it will remain a top dog.