Posted on November 8, 2017 by Bill Hirschman 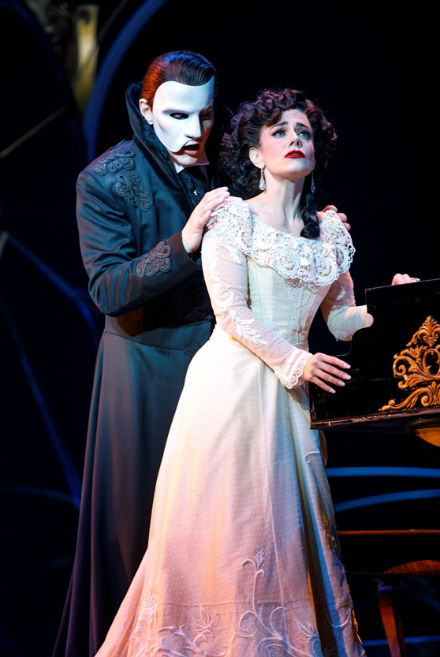 When critics are not allowed to view a film before its release, it’s likely that the movie is a disaster. In theater, when a planned big budget production never opens in New York City, perhaps a producer thinks a worthy work won’t appeal to the snooty sophisticates in the Big Apple, but other times….

So it’s understandable that audiences walk into the Broadway Across America tour at the Broward Center of Love Never Dies with some anxiousness since this sequel to Phantom of the Opera has gotten mixed reviews in various reincarnations and a New York production was cancelled.

But this version of Andrew Lloyd Webber’s attempt for lightning to strike twice, while inherently flawed, is undeniably a lush, gloriously passionate and entertaining exercise that is exactly what it wants to be: a mashup of a Broadway musical complete with soaring arias and dancing interludes, a Harlequin romance of rekindled lost love and a Lifetime movie of the week about a woman trapped in a no-win situation between two adoring men. If it’s not enthralling or moving, Love Never Dies is a competently-executed evening that won’t make an audience feel cheated.

No, it is not Phantom, although the creative team cannily spun selected elements into a new story, even quoting brief musical phrases from the original. The conceit is that Erik the Phantom escaped the Parisian mob with the aid of ballet mistress Madame Giry and her ingénue daughter, Meg. They sailed to Coney Island (yes, Coney Island), where Erik built an elaborate and macabre side show of freaks and Cirque du Soliel performers working in a burlesque he dubbed Phantasma. Between creating inventions ahead of their time, he continued to write music for his beloved Christine.

Ten years have passed, it’s 1907 and diva Christine is coming to New York to give a concert along with hubby Raoul and son Gustave. The dashing Stage Door Johnny has devolved into a depressed controlling alcoholic ne’er-do-well with huge gambling debts that this trip is designed to pay off. Of course, this is a ruse for Erik to make a play for Christine, ostensibly because he wants to hear her sing his latest ode to her.

The book by Webber, playwright Ben Elton and, believe it or not, thriller writer Frederick Forsyth (Day of the Jackal) has massive logical problems that stem from one huge change in the Phantom story that must be revealed. (There’s a second surprise we won’t spoil but you have to be brain dead not to see it coming).

After Erik had kidnapped and terrorized Christine, they apparently had a passionate night of transformative love-making during which they forged an undying and deep true love that has lasted the decade. This apparently occurred, go figure, the night before she married Raoul, with the cops and crowd baying for his blood. He hit the road the next day.

Neither the 1909 novel, two other musicals, eight film or TV versions nor the original musical contemplated this, even though none of those versions resembled each other much. But in each, when last we saw these two, Christine felt compassion and pity, not love or lust.

(In the original musical, Michael Crawford was noticeably 18 years older than Sarah Brightman and the script emphasized the paternal/avuncular overlay to the relationship. Since then, the actors playing Erik have gotten younger and younger.)

And while Erik is still nutso obsessed with Christine, this serial strangler who murdered people with a chandelier is still capable of blackmailing the woman he allegedly loves with the life of her child. But their mutual love endures such minor obstacles, in part because Raoul has turned out to be such a disappointing jerk and the bookwriters put her into a damned if you do damned if you don’t vise that must be resolved. (Not very well, by the way).

But Webber and company would probably reject all this as missing the point of the production (besides to make money). This edition is an even more unapologetic wallow in unadulterated soap opera romance told through faux opera music, which is quite beautiful as it swells like the ocean. When Erik and Christine hook back up, their extended musical exploration of misunderstandings, regrets, pain and a wary reconciliation is a soaring scene worthy of a minor opera. And when Christine sings the title number at the climax, you can’t deny that Webber still knows how to write a number that sticks with you hours after the curtain drops.

Webber has, indeed, penned another lovely score that ranges from heartfelt power arias to intentionally cheesy burlesque numbers for the vaudeville show. As often happens since he and Tim Rice broke up, the lyrics are not notable. Glenn Slater (The Little Mermaid and Sister Act) and Charles Hart (one of the original Phantom collaborators) deliver some poetic lines, but most of their work is just unimpressively competent.

The solid staging by Simon Phillips, who directed the Australian version, and choreographer Graeme Murphy create the feel of a dark, beautiful but dangerous whirlpool, especially the unsettling creepiness of the side show populated by a bizarre collection of denizens.

The key to this production’s success, however, are the two leads who invest themselves unreservedly in whatever is asked of them. Tall, trim Gardar Thor Cortes is an English-Icelandic tenor with considerable opera experience but who has also done musicals including Phantom. He has a seemingly tireless powerhouse voice with an impressive range and a flexible body that contorts to express emotions he cannot facially deliver from behind a mask. How he will last eight performances a week will be a wonder.

Meghan Picerno not only has a simply gorgeous soprano with a power to equal Cortes, but gives a performance that exudes the sense of someone no longer young who is dealing with the realities of late middle age when we realize our dreams have not come true.

Praise is also due Casey Lyons who switches off with Jake Heston Miller as Gustave. The boy has an angelic voice and is more convincing in his role than most child actors on stage – especially since he gets the most banal lyrics in the script.

Reputedly, the production values in London and Australia were breathtaking — perhaps the strongest part of those editions. This a road tour that must be broken down in a few hours, so that kind of scope is impossible. But the atmospheric lighting by Nick Schleiper, sound by Mick Potter and especially the lavish, ornate, almost Rococco sets and costumes by Gabriela Tylesova are truly amazing for a tour production. If this ever does go to Broadway, Tylesova should be nominated for a Tony.

Webber began toying with the idea four years after Phantom opened. Forsyth asked Webber’s permission to pen a sequel, resulting in a short novel The Phantom of Manhattan in 1999. I read it back then. Enh. Webber began writing music for it in 2007 and the show bowed in London in 2010 to negative reviews. It closed for four days for rewrites and work by a replacement director. A supposedly quick-to-follow 2010 New York production was cancelled ostensibly because Webber had health problems, but the show has never resurfaced there. A new creative team took it back into the garage and emerged with an Australian production that received better reviews and was recorded for a DVD. That toured through Copenhagen, Vienna, Japan and Germany. This American tour opened last September.

One Response to Love Never Dies: This Phantom Sequel Is More Of A Soap Opera, But Webber’s Music Still Soars