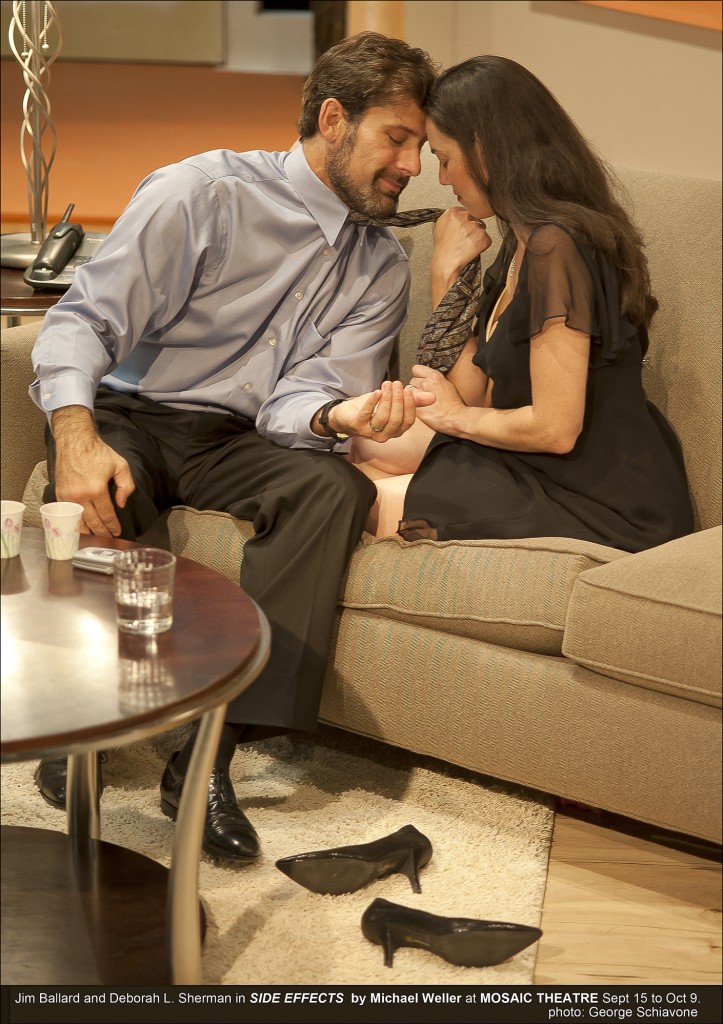 Jim Ballard and Deborah L. Sherman connect as the troubled couple in Mosaic Theatre's Side Effects / Photo by George Schiavone

Actors are accustomed to carving out the marrow of their lives to provide the psychic building blocks of a performance.

But for Deborah L. Sherman, her role as a bi-polar housewife in Side Effects opening this weekend at Mosaic Theatre cuts awfully close to the bone.

“I have lived my whole life with mental illness,” she volunteered with a rue-tinged laugh. Her father and sister struggle with bi-polar disease; her brother-in-law copes with schizophrenia. The damage to her entire family echoes the title of the play.

“That sense of mania and shame and panic and fear and everything that comes with having an episode, I’ve seen first hand.…” She paused a moment. “…as the sane person in the room.”

Side Effects is the third in Michael Weller’s trilogy of two-character plays examining marital relationships. The second, Fifty Words, was a major success at GableStage last season. The husband in that one is seen talking on the phone to a woman he is having an affair with. That character is Lindy, the woman Sherman plays in this episode.

Lindy is an intelligent, articulate and acerbic mother married to Hugh, a struggling businessman considering a run for public office. But her cocktail of medications isn’t working (assuming she’s taking it) and events ignite escalating verbal slugfests.

The guts of the play ring painfully true for Sherman. “I’m convinced Michael Weller either lived a life with someone with this illness or did such an inordinate amount of research. There are things in the script that, unless you’re really familiar with bipolar disorder, you’ll think it’s just over the top for no reason.”

For instance, she recalled, “Someone who is bipolar and is in the middle of an episode can have lucid thoughts and have a normal conversation and then all of sudden start yelling for no reason.”

Sometimes actor Jim Ballard, playing her husband, says a line that Sherman recalls saying to her own family. “There have been some days (in rehearsal) that have been more difficult than others.”

Despite coping with the resonances, Sherman and director Richard Jay Simon are more focused on making her behavior credible to the audience.

“You don’t want to be chewing the sofa, but it’s real. That’s what happens.”

Sherman sees a more crucial challenge as ensuring the audience grasps the totality of the couple’s relationship, not just the operatic explosions.

“This show is very difficult to navigate in the sense of the emotional arc of the play (because) these people really love each other,” Sherman says. “There is no other way they would be together considering everything they go through.”

That’s why she likes that Weller has the scenes occur over a period of time rather than the one evening of Fifty Words. “It not only allows you to see Lindy having an episode, but you get to see Lindy having a perfectly normal life. You see… ‘Oh, this is who he fell in love with.’ … So you really do root for them.”

She added, “This is a show about what people are willing to sacrifice… for each other in order to maintain stability in their life…. and you can only do that when you truly, truly love someone. Even if it ends badly, especially if it ends badly, you know that there is an underlying sense of love.”

This play provides Sherman with an opportunity to combat the public’s misunderstanding of mental illness.

“I think there’s shame attached to being mentally ill. You’re not supposed to talk about it. You’re not supposed to acknowledge that there’s anything wrong with your brain, because if you do, everything that comes out of your mouth becomes questionable even if you’re medicated and under control for 20 years and perfectly normal.

“Just because you’re mentally ill doesn’t mean that you’re not functional. There’s still valid things about the schizophrenic guy on the corner who says Jesus is coming. He has a moment of lucidity and he goes, ‘Your right tire is a little low,’ and you look and it is. You (should) go, ‘Thanks, man.’ ” 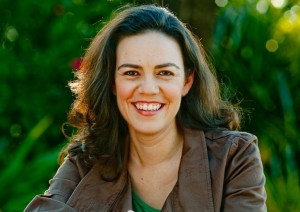 Her wrestling with the play’s subject matter dovetails with the fact that rehearsing this show is only one of the demands on her time. At one point this month, she was simultaneously rehearsing this play in Plantation, acting as the quirky performance artist in Mad Cat Theatre’s so my grandmother died blah blah blah in Miami and producing Song of the Living Dead at The Promethean Theatre in Davie, the scrappy company that she co-founded in 2004.

Plus, her day job is performing as a clown “nurse” with the Big Apple Circus’ Clown Care Program at Miami Children’s Hospital.

“And my kid started kindergarten this year…. I don’t think I’m the kind of person who knows how to sit still really. I’m constantly in motion…. When I’m not in shows, I’m running shows or I’m at shows.”

Simon marvels at her commitment: “Deborah works as hard, if not harder than anyone in this business.  To produce one show, act in another, and then rehearse another is a monumental feat and speaks to her passion about the work. I’m only grateful that her other two commitments are finished so that she can have tunnel vision on Side Effects.”

This spurt of work is part of an enviable non-stop procession of roles over the past few years, yet she never turns in less than a thoughtful, believable creation.

Last winter, she competed against herself for the best supporting actress Carbonell Award. There was the tightly-wound lesbian in Naked Stage’s No Exit and the role she won the award for, the judgmental Jewish lactation consultant in Florida Stage’s world premiere of Goldie, Max and Milk.

Among two dozen roles or more, she’s also proud of playing the central heroine in the first act and her mother in the second act in Promethean’s Three Days of Rain last season. There’s also the rigid alcoholic widow in Dead Man’s Cell Phone, a cynical political reporter in Farragut North, the frazzled girlfriend in Shining City, the ditzy bride-to-be in Brilliant Traces and the sleazy tabloid journalist in Dumb Show.

And her resume would be incomplete without mentioning Conchita in the world premiere of Nilo Cruz’s Pulitzer Prize-winning Anna in the Tropics at New Theatre in 2003.

While Sherman may seem to have been here longer, she has only been in the local theater scene since 2000 when she moved here from St. Louis.

She was born 38 years ago in Brooklyn to a Jewish father and Colombian immigrant mother – a combination that already invested their home life with “complications.” Although she was raised Jewish and has taught at Temple Israel of Greater Miami, her mother’s heritage has made her “not Jewish enough for some people and not Hispanic enough for others.”

“I thought everybody’s mom was like my mom who made the best brisket for Passover but had this strange little altar at the end of the dresser with all these icons and stuff.”

When she was 8 years old, the family moved to Houston where she attended high school and eventually Lamar University in nearby Beaumont.

The way the family dealt with the mental illness — or didn’t — caused significant internal problems.

She left home at 16 years old for self-preservation. “I have a certain relationship with my family that is not necessarily functional because of the illness and I have to distance myself in a certain way because I have my own family” now.

The greatest thing about growing up in the home that I grew up in, that was not normal or stable by any stretch of the imagination, is that I now know exactly how not to raise my child. Not to say my parents were horrible, awful people. They were wonderful, wonderful people doing the best they possible could under the circumstances they were in, absolutely. And do I think they loved me? Yes, in their own way. But (my son) Julian will never know that as normal.”

An early lifeline to normalcy was an abiding love of theater dating back to being in the first grade play in Hebrew school.

She also connected with Adam Gorelick, her husband now of 16 years. Gorelick, who counsels students at Nova Southeastern University while he finishes a master’s thesis, makes her multi-tasking life possible by sharing the familial workload.

“He’ll probably be beatified at some point,” she said.

They moved to South Florida in 2000 and she began getting jobs on stage soon afterward.

She and actress Beth McIntosh founded Promethean in 2004 when a show they had been rehearsing at Hollywood Playhouse was shuttered along with the theater itself before opening night. The frustration and energy led to the creation of a company that initially performed in a Miami Lakes storefront and has since been quartered at two theaters on Nova Southeastern University’s Davie campus. The troupe has struggled from one show to the next, heavily dependent on fund-raising and producing acclaimed work on a tenth of most theater’s budgets.

“When I look back at the last eight years, what Promethean has been able to do, I’m really damn proud being this little girl from Texas who just decided when I was nine that I was going to have my own theater.”

Part of what keeps her going is the hallmark passion for her craft that pours out of her as she describes exploring a role with a particular actor or director who help her bring out the best in her work.

Talking about Ballard, she enthuses, “He is such an actor’s actor. And he is absolutely my partner up there and we are doing this dance together that is very complicated, wonderful and crazy all at the same time. I am extremely lucky that I have him to hang on to.”

Colleagues feel the same about her. Ledford, who has directed her several times, said, “Deb brings her incredibly intuitive mind to the process as well as an open emotional palette.  She is able to analyze a text from an outsider’s perspective and then is able to plunge deeply into the world of the playwright’s imagination.  She gives herself the freedom of failing while striving at being the best she can be.  She is fantastic advocate for any character she portrays.”

She has that same familial feeling about the Promethean troupe: “They all love being with each other and they’re having so much fun. And to create an environment where everyone is like, ‘I’ve been waiting to come here all week,’ that makes it perfect when it comes to theater.”

The pace and workload are a validation of sorts, especially for the family’s decision to make their stand in South Florida.

“You know, I have friends who I went to college with who are actors in New York and who are not actors anymore and they are ten million times more talented than I could ever be any day of the week. (But) I have worked as an actor and been able to pay the electric bill and make car payments. … I would much rather live somewhere that allowed me to experience the things that I experience as an actor here.”

“I choose to live here.”

This entry was posted in Features and tagged Jim Ballard, Mosaic Theatre, Richard Jay Simon, Side Effects. Bookmark the permalink.