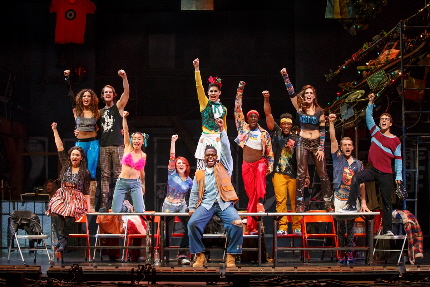 Christian Thompson saw his first Broadway musical at the Broward Center for the Performing Arts when he was seven years old. A national touring company of Cats was what hooked him on the musical theater experience.

“My Mom knew she should get seats in the aisle because when the actors came down the aisle, I was right there,” said the Oakland Park native, who is on his first national Broadway tour.

Now, Thompson plays Benny Coffin III in the Rent 20th Anniversary Tour, which makes its stop at the Broward Center Oct. 7 through 9. 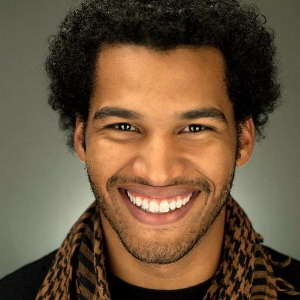 Thompson, 24, has the task of being charged with portraying probably the least liked character in Jonathan Larson’s musical, which follows a year in the lives of seven artists struggling to find their dreams while dealing with life, death and everything in between. Benny Coffin III once lived with the roommates in the loft building in New York City’s East Village, but moved up to a better side of town after marrying the daughter of a wealthy real-estate mogul. He’s now demanding the group pay rent and is perceived as a “yuppie sell out,” who wants to raze the building in which his former roommates live. The actor revealed he’s taken a different approach to the character.

“This Benny is a little bit smoother. Because of my movement background, he’s a more fluid, which I think gives him a different energy. I add a likeability factor to Benny. He has all the right intentions, he loves his friends, and he’s doing everything to better their lives and the community, it just doesn’t fall in line with the values his friends have. I think this idea of Benny coming from good intentions and not being the clear cut bad guy is something definitely relatable.”

Thompson knows a bit about neighborhoods. His mother, Sherri, was “a big advocate for the arts,” so by design and happy accident, she moved her son across the street from North Andrews Garden Elementary School, a magnet school for the arts.

“I started acting in the third grade and that’s when I decided I wanted to be an actor,” said Thompson. But soon after, the acting program was halted at the school. “So I played viola.” When it was time for middle school, the youngster made a deal with his mom. “Parkway Middle School was looking at me to play viola there. I told my mom that I’d go there and play viola, but that I would audition for the musical theater program. And if I got in, I would follow that path and if I didn’t, I would play viola. I got in to the musical theater program,” he says with pride. He then earned a performing arts scholarship to American Heritage School. “It was an amazing blessing and an amazing school,” he said.

When it was time to think about college, Thompson went to New York to participate in the National Unified Auditions (“college cattle call,” he said), where colleges conduct simultaneous auditions and interviews for their theater programs. “I crammed as many auditions as possible within that weekend. But on my last day there, I had some extra time and I went to see what schools were still taking walk-ins.”

Penn State University was one of them. “I was at the right place at the right time,” he said. “Penn State offered him a scholarship and off to State College he went.
He graduated in 2015 with regional roles at the Ocean City Theatre Company as Bernardo in West Side Story, a role in Dreamgirls at Theatre Raleigh, and in the National Black Theatre’s world premiere of Blood at the Root in Harlem, which actually came out of a playwriting program at Penn State, written by Dominique Morisseau, author of Sunset Baby.

Now he’s touring in the 20th anniversary tribute production of Rent. The touring show is based on the original direction by Michael Greif and restaged by director Evan Ensign, who says his young company with actors like Thompson bring a freshness to the roles.

While there has been much talk about the restaging or reimagining of the musical, Ensign said there haven’t been many changes made. “It is based on the original staging of the show. It’s a period piece, remember, and we have to deal with the fact that the world moves on. You can’t set Rent in a different time because it has to be when AZT was the only thing that would keep someone with HIV alive and maybe only for a short time. The mortality issues in Rent go away if you try to set it to a current time and the lyrics won’t make sense.”

The director wanted to make sure his company of actors understood the need for the time pressure – “that if you have HIV you have basically a year to live.”
During rehearsals, Ensign would show the cast documentaries about AIDS in the time period. “We’d have discussions and sometimes it would get really personal.”
For the young Thompson, it’s the perfect time for Rent to go back on the road. “We need to be reminded right now of the universal theme of inclusion and love and caring for your community. That’s what we need right now as a people and as a human race. So it’s really an honor and a blessing to be part of this tour.”

Meanwhile, he said, mother, Sherri, has rallied so many people to come and see her son when the tour stops at the Broward Center that he feels like he’s running for president. “She’s on a campaign, Christian 2016.”

Rent 20th Anniversary Tour runs Oct. 7-9 at Broward Center for the Performing Arts, 201 SW Fifth Ave., Fort Lauderdale. Showtimes are 8 p.m. Friday-Saturday; 6:30 p.m. Sunday; 2 p.m. matinee Saturday and 1 p.m. matinee Sunday. Tickets are $30-$90. 954-462-0222 or go to Browardcenter.org. A pre-show lottery for seats in the first two rows of the orchestra section will be available for $25 for every performance.  The $25 tickets are available for in-person purchases, on the day of each performance only, two hours prior to the show.  The $25 tickets are available for cash only purchases and are limited to two tickets per person.

This entry was posted in Features and tagged Broward Center for the Performing Arts, Christian Thompson, Rent. Bookmark the permalink.