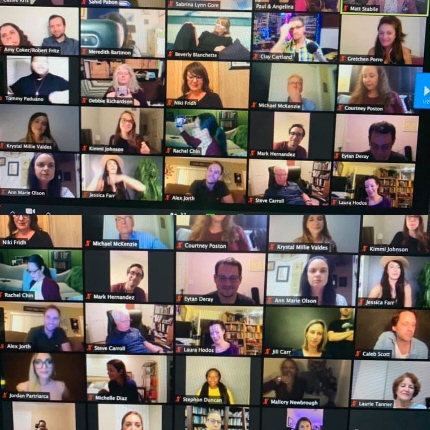 All at one time across South Florida, 37 artists accustomed to performing in front of 50 to 1,000 people now sat alone in their bedrooms, their kitchens, their patios, their backyards emoting just as earnestly inches away from a tiny lens embedded in their laptops.

A technical glitch prevented the live work from being streamed as it was occurring at 5 p.m., but by about 10 p.m., the marathon had been archived on You Tube (https://tinyurl.com/sclmel8) and was being watched across the country.

The goal of its creators, Theatre Lab’s Artistic Director Matt Stabile and Director of Education & Community Outreach Jill Carr, was to provide immediate relief to colleagues staggering under the sudden loss of theater work stretching out months as well as layoffs in their survival jobs such as waiting tables and dubbing voiceovers.

A full list of performers, what time they appeared in the program and how to donate to each of them directly can be found by clicking here.

Starting on Sunday March 22, a growing group of volunteers put together the complex logistics over eight days with a sense of urgency because “I was dedicated to… find a way to get money into these performer’s pockets,” Stabile said.

The result by any estimation was a stunning display showcasing an array of talent – about 78 theater artists presenting works written just that week similar to the Overnight Theater Project, memorized in most cases in a day and half, and directed through video conferencing. In support were an estimated 100 other people ranging from cyber techs, theater companies, publicists, and administrators at Theatre Lab’s home base at Florida Atlantic University in Boca Raton.

The event also fueled a feeling among some professionals that the classic definition of theater should be reexamined as the industry and art form go forward.

“Usually the way it works is we’re bringing people together in a space to experience something together,” Stabile said. “What has happened now is, very simply, I think the space has changed…. We’re now finding ourselves in a place where we say, okay, well, if the physical space cannot be the gathering point, how else can we make that happen? I think we’re just like super fortunate that we live in this time where these technologies have been developed, where we can still connect…. Maybe 10 years ago, this would have been impossible…. The takeaway for me that we can’t get together in a physical space right now, but we can still come together and create things and inspire people.”

Actress Meredith Bartmon who also penned a script and dramaturged, wrote, “In a time when the future of our industry seems really uncertain, the feeling of community and of being a part of something so joyful and so ambitiously kind is the real gift Stabile and Theatre Lab gave to us, I think. They have set an inspirational precedent for how to innovate as storytellers in this age of isolation and how to come together as neighbors when we are forced to be apart. The donations and professional connections are icing on the cake.”

The theme assigned to the playwrights was “hope,” but related themes resonating with this specific point in time were common. Often they centered on relationships and reaching out to make connections: someone talking to a parent, a child, a lover or a spouse in either a wry gallows humor spiel or heartfelt outpouring of fear and frustration.

Many focused on characters sharing stories from their past such as Candles in which Laura Hodos stood-in for playwright Bartmon’s recollection of a surprising Hannukah in London, told to her daughter on a coronavirus-hampered 16th birthday, directed by Nicole Perry.

Some were hysterically funny such as Courtney Poston’s manically overtaxed waitress explaining to a customer why she hadn’t served them promptly in Waitress in the Weeds – a piece written by Casey Dressler (The Wedding Warrior) and directed by Zoetic Stage Artistic Director Stuart Meltzer.

Some were poignant such as Eytan Deray’s Brightly with an impassioned Caleb Scott portraying a father talking to his son who has just come out to him, recalling his birth and then reaffirming his love, directed by Matthew Glass. And Beverly Blanchette portrayed a retiree coping with her ailing mother quarantined out of her reach in Bruce Karp’s The Essentials of Life directed by Gretchen Porro.

Or Michael McKenzie in the satirical social commentary of Shelter In Place by Robert Goodrich and directed by Andy Rogow, in which a man keeps a diary in a survivalist-inspired shelter underground with 20 people, describing the disintegration of routine, and the longing for connection of the outside world.

The vast majority of participants were in their 20s and 30s with a handful in their 40s and beyond. A few used simple props – Mallory Newbrough speaking to an infant, which looked like a wrapped-up towel in Steve McMahon’s Soon, directed by Timothy Mark Davis. Or Kimmi Johnson lifting a goblet in a sardonic barbed wedding toast as her sister marries a former beau in Melinda Unhinged written by Isabella Werber and directed by Patrick Fitzwater.

The money was donated directly monologue by monologue to an online account like Paypal, Vendmo or Zelle tied to each individual piece, rather than to Theatre Lab. Therefore, the livestream glitch turned out to have a positive aspect: Watching the replay, potential donors can freeze frame on a sign each performer held up with the financial contact information for themselves or for a different artist they wanted to benefit. The links for donations remain active.

Two performances benefited the South Florida Theatre League, which has just started a relief fund for local professionals, and the Theatre Lab project recommended donating to them also at https://tinyurl.com/wxt9egq. .

There’s no way to calculate how much help was donated, but some performers reached back to Stabile to thank him. They spoke of “definitely situationally changing donations,” he said.

Actor Tommy Paduano who performed Nicole Perry’s Cooking, wrote, “It was a joy to see how many people came together for the same cause. Really put the ‘community’ back in ‘theater community.’ And on top of that, I can afford groceries now! I can only speak for myself, but it’s comforting to know that people have watched this event and care enough to make a donation. It’s proof that the arts are important, and how much people love this collective of South Florida actors.”

The project also got help from people like publicist Carol Kassie and several theaters including Slow Burn, New City Players, Island City Stage, Zoetic Stage and Measure for Measure. “If you (list them) I’m sure that I have somehow missed thanking someone,” Stabile said.

The idea derived in part from Theatre Lab’s other major facet: teaching students. During the week, Stabile and Carr re-taught their classes in Parts of Story and Monologues for free in online workshops. Then they asked the participants to submit monologues to be considered for the project. About 100 scripts, mostly four minutes long, were reviewed by volunteers on Friday. About 37 were assigned out on Saturday morning to performers who had volunteered and they hooked up online through Zoom, Skype and Facetime with directors and the playwrights.

The experience was challenging, but Stabile encouraged others to try it; the company certainly plans to try it again in some expanded form someday.

“It’s so hard because I feel like I still don’t even know all the lessons that we learned in terms of how to do it…. It takes a lot of it takes just as much effort as you think it’s going to take and more. But that shouldn’t stop you from trying to do it.”

But he has advice: It takes a lot of planning and coordination, farming out tasks to a large group of volunteers, and crucially, planning for glitches. “It’s not really all that different from a live theater production (because) stuff goes wrong in every show….We know that one night, a costume is going to rip; we’re used to that kind of stuff. So you just have to apply the same theory to the technology.”

Moments during the cybercast underlined the South Florida theater community’s reputation for unusually strong collegiality and mutual support. While managing the event, Stabile could see from his computer screen the postage stamp images of all the performers lined up for their turn in a kind of cyber-community, all of them watching the performance currently in progress.

“What I was seeing over and over again is all of these separate computer screens where everybody would stand up and applaud at the end of each performance.”

The experience invigorated the participants. Actress Poston wrote, “It was awesome seeing the performances of actors, many of whom I haven’t had an opportunity to see perform before (or they don’t get as much stage time as they should), and hearing work from friends I didn’t know dabbled in writing! It was cathartic, as theatre should be. I laughed, I cried, I ate pasta and watched my friends share stories of hope, and a little bit of themselves, as well.”

It also was an artistic release for people frustrated in their need to exercise their art. Veteran actress (and Stabile’s wife) Niki Fridh told him after the recording ended, “The thing that I will remember most about this is that for three hours I forgot what was going on (and) I just got to be in a virtual room with a bunch of people that I love and see them do what they love doing.”