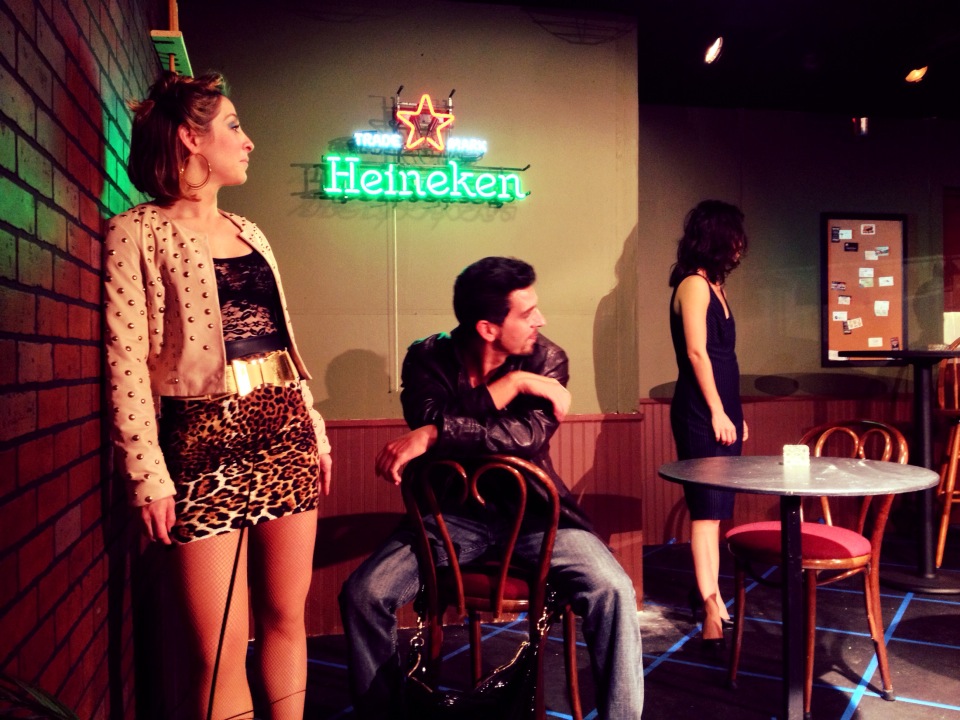 Five supposedly inarticulate people hold forth in a seedy Bronx bar in a profligate torrent of existential philosophy and metaphorical verbiage in John Patrick Shanley’s Savage In Limbo at the Alliance Theatre Lab. Certainly, no collection of blue collar ne’er-do-wells ever rhapsodized so eloquently or at such length about the search for meaning in life.

But if Shanley lets them go on way too long plowing the same ground over and over and over, it’s undeniable that this cast under Adalberto Acevedo’s direction wrenches at the audience’s heart as they depict humanity’s fundamental yearning to change their lives and find “something better.”

With crackling electricity and an earnest sincerity, the Alliance company conquers a script that is both lovely in its lyricism and risks wearing out its welcome by endlessly running full out in a hamster wheel getting nowhere (which may be the point). It’s a testament to the pyrotechnics and energy of the cast and the director that the audience willingly stays with it.

It’s not that these characters mean to philosophize; they’d never be caught dead being thought of as children of Sartre or Camus. It’s that they are all have come to a point simultaneously where their agonized angst has peaked and is driving them to try to find an answer by verbalizing their anguish.

The premise is that five former classmates in a parochial school gather in a neighborhood bar on a deadly quiet Monday night in 1986. As the title suggests, they are in limbo. All of them are 32 years old and they can hear the clock ticking with little to show for their dead end lives of not-so-quiet desperation.

Even before the play begins, the taciturn proprietor Murk (Christian Vandepas) is sweeping up last night’s detritus while barfly April (Breeza Marena Zeller) is slumped over asleep at the bar.

Exploding into the bar like a dervish is Denise Savage (Shira Abergel), a lithe and lovely creature who is by her own admission a compulsive talker. And how. She is on the hunt for male companionship, but she’s stalking an even more trenchant and philosophical quarry.

The next arrival is Linda Rotunda (Valentina Izarra), famed in the neighborhood for her easy virtue and dressed in a leopard mini-skirt, fishnet stockings, pumps, a see-through lace blouse and black bra. Three times an unwed mother, she is beyond upset because her longtime but inconstant boyfriend Tony has told her that he wants to see “ugly women.” Though the guy is clearly a jerk, her sense of self-worth in tied up in that somewhat flawed relationship.

Although the two women could not be more different (Denise confesses that she is still a virgin and still living with her mother), they strike up a tentative friendship and in a desperate reaching out for human contact, agree to get an apartment together. When April wakes, she is still blotto, but she expresses her own loneliness in a hilarious yet touching aria. That leads the two women to offer her a berth in their new venture.

Crashing into the bar next is the preening, self-involved Tony himself (Curtis Belz) who is in extremis that the rut of his life is: “the girl, the car, the bed.” An  “ugly” Russian émigré he met while driving a cab told him about the problems in her country and it somehow made him realize his own life was calcifying, thereby making him question all aspects of his current life, including his relationship with Linda.

From there, everyone spins and frets with their nerve endings exposed. Murk is the least perturbed, preferring to hide within rules and routines, but he has a genuine affection for Alice, which comes out in one of the loveliest and most surprising scenes in the play. No further spoiler here.

For 80 minutes, these denizens mix and match and maneuver in a desperate searching for meaning, mostly through human connection — which is not automatically a satisfactory long-term answer. But these people ache so hard for something better that your own muscles hurt for them

The characters with Bronx accents as broad as the Hudson River teeter on the edge of caricatures, even seeming like kin to the cartoon characters in the film Married To The Mob. But this is Shanleyville, the same territory he depicted in his screenplay for the film Moonstruck. Remember Cher yelling “Snap out of it!” He has nothing but respect for these people. He, in fact, is giving the middle finger to the intellectuals who dismiss such people as lazy, self-destructive, shallow and unworthy of compassion. Snobs believe these people really don’t want anything better or they gave up long ago out of some character flaw.

But, my God, can they talk. Speaking most of the time in the bluntest and profanest vocabulary, they unleash unending strings of metaphors, searching for the right words, as if finding the right descriptions might provide the key to unlock their cages. No one talks like that, but no one talks like Hamlet or Lady Bracknell either. The speeches and dialogue are denser than a Tom Stoppard script, but if you can accept the theatrical conceit that these folks speak like this, you can lean back and let the warm bath of words wash over you like liquid poetry.

It’s the earnestness of the cast that make the lines ring true rather than pretentious, such as:
“I believe there is another kind of living that doesn’t have deadness in it.”
“What was my crime that I got life?”
“You only live once; you’re going to live it on your knees?”
“You know something is snapping at your heels; you’re smelling your own death.”

Shanley includes copious dollops of gallows humor along the way. When Denise says she’s a virgin, the sexually free Linda says with genuine interest, “Really? What’s that like?”

The problem lies in that Shanley’s script (a) must be played at 2000 rpm most of the time, and (b) thematically, he really only plays a handful of notes. So even at comparatively brief intermissionless 1 hour 20 minutes it feels like it goes on about ten minutes too long,

Conversely, the performances and direction are the best we’ve seen any of these folks deliver. Abergel, who has worked for several small theaters in the region, is a tireless bunch of nerve endings on a hunt compelled by a life-and-death hunger. She is matched stride for stride by Izarra (last seen in Ground Up and Rising’s Gruesome Playground Injuries) who just barely sidesteps the cartoon that Shanley has written, an accomplishment requiring considerable skill. Belz, another mainstay of Ground Up and Rising, has the same challenge and somehow triumphs over the Saturday Night Fever character that Shanley has written. Zeller, one of Alliance’s veterans, often sounds like a sitcom drunk and yet she manages to make credible April’s emergences from an alcoholic haze to vent her touching loneliness and pain. Vandepas, too, makes plausible Murk’s willingness to emerge from his shell when April is threatened. Each gets at least two solos to express their loneliness and their fear of the specter of a living death that faces them.

Acevedo’s physical staging is some of his best and his set design of a claustrophobic but homey haven is note perfect on a tiny budget. No one is credited for costume design, which includes the hysterically funny outfit for Linda that she probably thinks is sexy, but looks like a hooker’s wardrobe.

All of the actors are aware of how their character move. Abergel is all wound up and tied in knots. Izarra sashays sexily. Belz is all over the place almost unable to control his body. Zeller sits like a lump. Vandepas stands quietly straight. And everybody talks with their hands.

Alliance has a varied track record. But this production, even with its flaws all laid at Shanley’s feet, is one of the most solid shows they’ve mounted.