D&D Heroines Vs. Demons In Area Stage’s She Kills Monsters 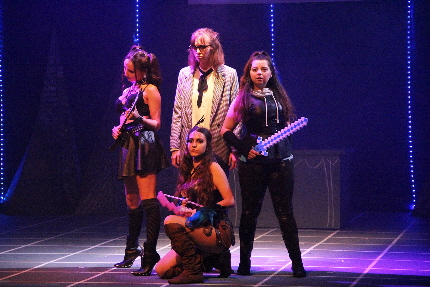 “When life itself seems lunatic, who knows where madness lies?….To surrender dreams – this may be madness….And maddest of all, to see life as it is and not as it should be.”
.              —Dale Wasserman’s Don Quixote in Man of La Mancha

The dramatic comedy given an inventive and enthusiastic production by Area Stage Company proudly describes itself as “theater for nerds,” or more accurately, for young adults raised on video games who have infused their fantasy life into every cranny not reluctantly committed to jobs, family and responsibilities in general.

The premise is that Ohio high school teacher Agnes Evans discovers the complex script that her 15-year-old sister Tilly wrote as a Dungeons and Dragons scenario before her death in a car accident. Agnes hopes studying it will help her to better know the sibling she had ignored in recent years. To do that, Agnes magically enters the imaginary D&D world to meet her sister’s leather-clad alter ego Tillius the Paladin. They embark on a danger-filled quest to rescue Tilly’s soul, often waylaid by elves and demons who can “kill” with magic spells.

The script by Qui Nguyen features lengthy tongue-gently-in-cheek stretches of our heroines and a band of associates battling monsters in New Landia. But it unambiguously champions serious themes about imaginative and sensitive outsiders using fantasy as a crucible for the loyalty, courage and shaky sense of self-worth missing from their “real” lives afflicted with grief and doubt.

The worlds on stage alternate. The sardonic Agnes seeks help from a fellow guidance counselor Vera, Tilly’s actual acquaintances and nerdy dungeon master Chuck who somehow sends Agnes physically inside the game. Once on the inside, Agnes still armed with her skepticism, is drawn deeper and deeper into the game’s narrative to discover surprising aspects of her sister that she ruefully realizes she never knew because she stopped investing in the relationship.

Between episodes of combat, Agnes discovers that the various characters are Tilly’s reimagining of misfits (and D&D players) whom she knows in real life and who become superheroes in her game. It illustrates Tilly’s troubled disaffection from Agnes’ world and Tilly’s desire to reorder life to her wishes.

The play absolutely requires the audience to surrender to a quirky comic book type vibe – especially a total embrace of the suspension of disbelief. But if patrons can do that – the target audience will have no trouble – She Kills Monsters will be an entertaining odyssey. But be warned: If patrons cannot settle into that groove, the entire enterprise will seem threadbare, ludicrous, even tedious. This is not a subtle play or production; it’s as interested in having fun as in making a statement.

It’s a title especially popular with high school drama clubs and colleges including a production at Florida International University. But She Kills Monsters is definitely not for youngsters who will not appreciate Nguyen’s integral emotional content that gives the evening worth. There’s also considerable sexual references familiar to frustrated folks between the ages of 13 and 23. For instance, the most dangerous creatures are two sexy succubi who act like a teenager’s wet dream of willing cheerleaders.

The cast dives in courageously no matter how bizarre things get, but the key asset is the vision of Giancarlo Rodaz. The young director has merged all of the theatrical elements he has designed – surreal setting, electronic music, kaleidoscopic lights, projections — into a consistent alternate universe. Intentionally making a point of his limited budget, Rodaz invites the audience to use its imagination and sense of humor to accept production values that are ingenious but have the home-made air of a high school homecoming float.

Nguyen wrote the script around 2011 but set it firmly in 1995 when technology was not remotely as sophisticated. He weaves in scores of references to pop culture (nods to 10,000 Maniacs, 56K and the TV show ER), icons long gone but that remain foundation blocks in the psyche of today’s young adults. Even the costume and prop designs favor blown up multi-colored squares that resemble those oversized video screen pixels with miserable resolution that characterized Nintendo’s Mario Brothers.

By setting the story in that quaint time before 4G and Playstation 5, Nguyen allows audiences to congratulate themselves that they have grown up to a degree – a kind of Brechtian distancing device that enables us to accept the silly sword and sorcery proceedings. Indeed, Rodaz, his cast and Nguyen unabashedly venerate while gently tease the characters’ unworldliness simultaneously.

The primary problem with the production is that it has gotten bewitched by the opportunity to play out the cute but fifth-rate battle scenes which, of course, are not meant to be remotely realistic. As a result, these interludes go on way too long in a script that already tests the patience of a crowd accustomed to X-Men flicks.

The script by Nguyen is a surprise for those who only know him through his superb Steinberg-winning play about post-war Southeast Asian immigrants, Vietgone. But he is better known as the co-founder of the Obie-winning Vampire Cowboys of New York City troupe which has been acclaimed as a pioneer in “Geek Theater.”

Katie Duerr credibly creates Agnes who is not comfortable in her life including her recent coupling with a boyfriend (Adam D. Crain). Duerr’s Agnes is ripe for being seduced by this world’s liberating possibilities. Jeana Montgomery embodies Tilly’s earnestness as well as her impatience and suspicion of her sister’s sudden interest. June Raven Romero serves as Vera and a sonorous voice black hooded narrator. Ryan Bauta is the dungeonmaster who is not quite sure how to handle Agnes’ interest. Tilly’s band is played by Anjuli Kaufman, Victoria Mesa and Victor Valdeon. Malik Archibald, Shalia Sakina and Isabella Pena play multiple supporting roles.