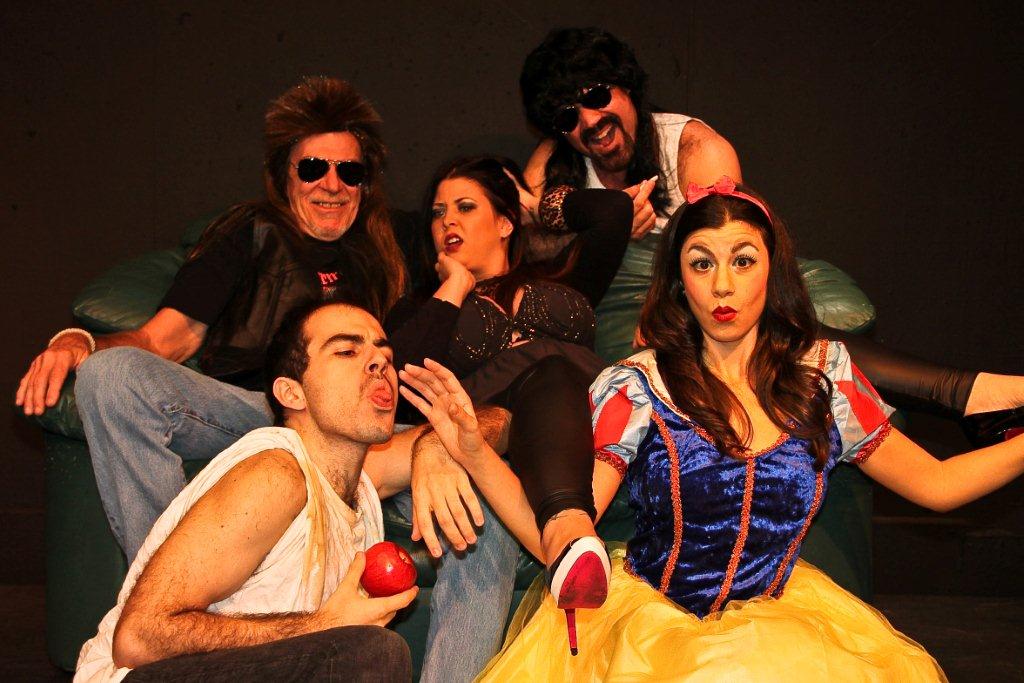 The first 15 minutes of Infinite Abyss’ Snow White Trash is a delightfully zany spoof that imaginatively reinterprets the fairy tale as a crass, royal blue hoot in which Disney’s sweet but dimwitted heroine takes refuge with the mullet-headed Dwarf Family living in a trailer park.

Unfortunately, after that, there’s another 50 minutes left. Slowly but surely, the air seeps out of the comedy, the energy level of all but one actor flags and the show lurches to a close with an occasional chuckle.

This world premiere script by Infinite Abyss founders Erynn Dalton, the producer, and Jeffrey D. Homes, the director, roared to life with a lot of promise, reminiscent of a raucously irreverent Saturday Night Live skit back in the days when SNL was still consistently funny.

Snow White Trash rightfully makes no excuses for having absolutely no socially redeeming meaning whatsoever. Instead, it revels in being stupid fun, from the moment a sleazy narrator (the very funny Dominick Daniel with slicked back hair, pointed sideburns and Brooklyn brogue straight out of Goodfellas) says to the audience grasping their drinks, “I hope you’re pissed already.”

Faced with the Evil Queen wearing Maleficent’s horned headdress from Cinderella (Kitt Marsh), the narrator quips, “When did the King marry Cruella de Vil?” and then asks as an aside, “He has to bang that every night?” Sophomoric, but delivered with enough topspin that it’s genuinely funny.

There’s also some laughs when a magic mirror (Zachary Schwartz who basically lifts a window shade on a picture frame) channels Paul Lynde and answers the Queen’s classic queries by crooning pop tunes. When a huntsman supposedly cuts out Snow’s heart, the mirror sings Celine Dion’s “Her Heart Will Go On.” See? Funny. Dumb, but funny.

Or when a servant says he’s been told by someone at the gate to serve the Queen with a “sub-penis” for copyright infringement on Disney characters and other song snatches, she dismisses him with “We’re a non-profit.”

It starts to fall apart when Snow escapes to the trailer park featuring Jim Gibbons, Angel Perez, Jordana Forrest and a silent Schwartz as the Dwarf Family. Comic timing disintegrates and the pace crawls slower than the characters’ drawl. Giggles like Perez oiling down Snow’s fey Prince (Daniel as a bisexual clone of the titular entertainer) goes on and on and on after the audience gets the joke.

There are still a few droll riffs to come: the Evil Queen disguises herself as the Avon Lady to peddle her fatal wares and the Prince revives the somnambulant Snow with a shot of adrenaline to the chest a la Travolta in Pulp Fiction .

The only actor to keeping the energy humming is Danielle Tabino who is consistently entertaining as the daffy, impossibly naïve heroine clueless to all the evil and considerable sexual sleaze surrounding her. Dalton and Holmes have given her some choice business such as making her confidant a dead mouse hung around her neck named – Fievel.

Dying actor Edmund Gwenn famously warned, “Death is easy, comedy is hard.” As several local troupes have discovered during the past two years, anarchic, nose-thumbing comedy can seem sloppy and loose, but that has to be an illusion. It can’t actually be sloppy and loose if it’s to land funny. This is no illusion.

The sloppiness is a surprise because while Infinite Abyss’ last show, Mitzi’s Abortion, was just passable, its production of The Pillowman last year was superb with the same director and two of the same actors here. Let’s hope they return to that level of work.

Full disclosure: Infinite Abyss was kind enough to let us review a preview, but it will have to chalk up a lot of improvement to enchant even a sympathetic audience much longer than halfway through.