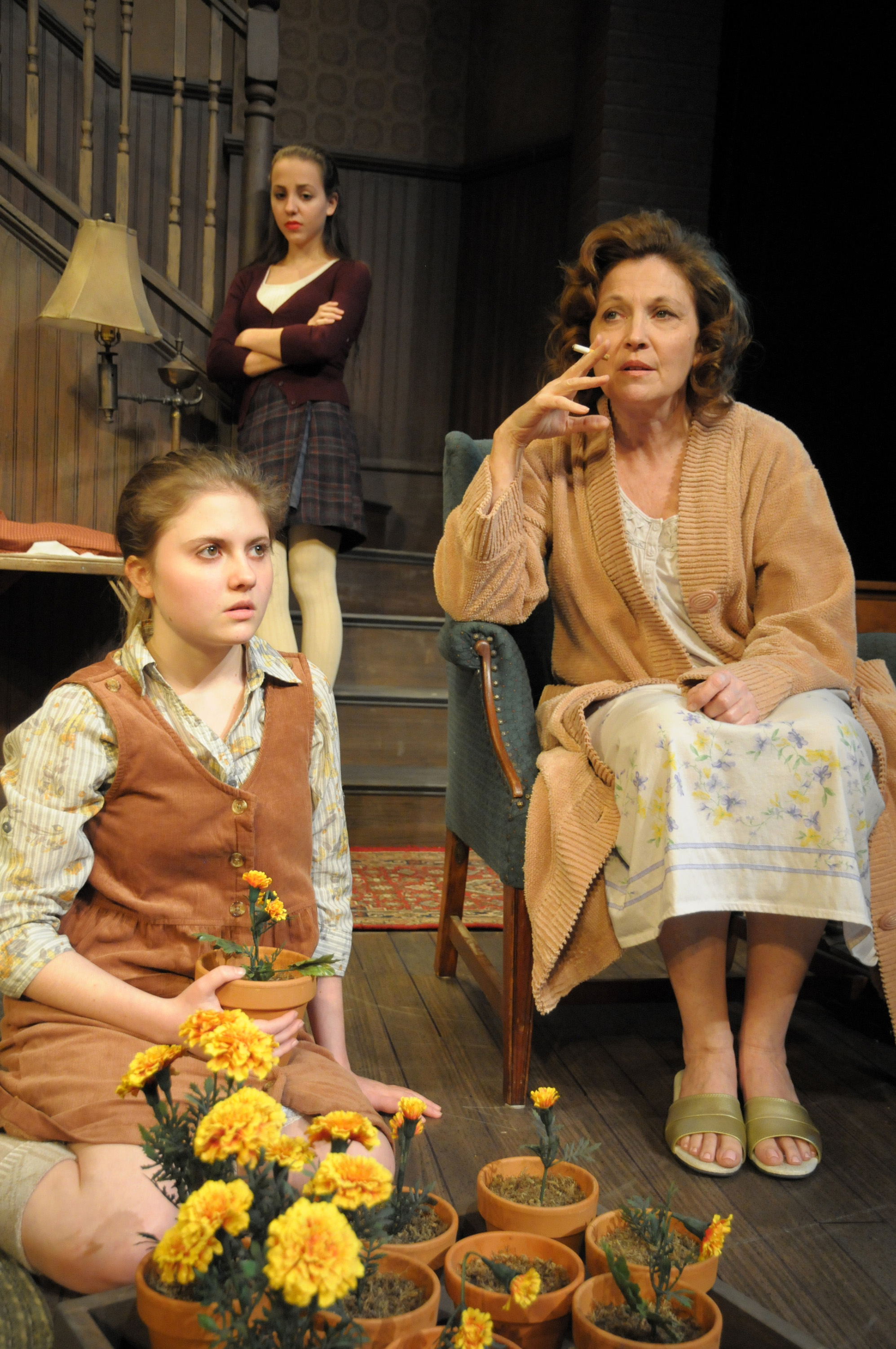 Although the playwright of Marigolds wants you to walk away in awe of some people’s resilience to overcome horrific beginnings, the takeaway from Palm Beach Dramaworks’ production is the merciless erosion that life blindly wreaks on the human spirit.

This edition of Paul Zindel’s The Effect of Gamma Rays on Man-in-the-Moon Marigolds skews to the darker side of that equation because of the overwhelming bravura performance of Laura Turnbull as an embittered, self-pitying mother wildly striking out at her daughters as displaced revenge for the blighted tragedy that chance has made of her life.

It’s a scathing, fearless portrait by a great actress with a solid director that leaves everything else, as the apt cliche goes, in the shade.

The welcome revival of the 1970 drama is an engrossing evening of theater that features a sometime lyrical, sometime blunt Pulitzer-winning script that few audience members have seen before. Dramaworks Artistic Director William Hayes has guided a strong cast through this examination of the dysfunctional Hunsdorfer family who the Fates themselves have seemingly cursed.

Beatrice (Turnbull) is a single mother whose late husband left her in poverty, driving her into a terminal tailspin of alcohol-enabled self-absorption and unbridled emotional abuse of her two daughters, Tillie and Ruth. While she occasionally shows genuine concern for the girls, Beatrice’s mindless cruelty to her children can be toxic beyond belief.

At one point, she rants to the Gods, in clear earshot of her daughters, “One mistake. That’s how it starts. Marry the wrong man and before you know it, he’s got you tied down with two stones around your neck for the rest of your life.”

Habitually dressed in fraying bathrobe and nightgown late into the day, she clomps down the stairs into the living room to dump the vitriol of her disappointment on whoever is unlucky enough to be in the room. Sometimes it is the impossibly ancient Nanny (Harriet Oser), the latest in a series of boarders taken in to provide some income to supplement Beatrice’s procession of failed get-rich schemes.

Tillie (sensitively created by Turnbull’s real daughter Arielle Hoffman) is painfully shy and profoundly lonely. Hoffman inhabits someone who expects withering criticism or, just as bad, blithe indifference from the one person who should nurture her. The way she clasps a white rabbit to her chest is heart-breaking. But Tillie is also bright and she loves school not just as a daily respite from the hell of her home, but as the promise of a long-term escape hatch. Beatrice, sensing this, keeps her at home as her whim wishes.

Tillie’s hope for the validation she cannot get at home lies in a science fair project in which she has hastened the growth of marigolds by exposing them to radioactive rays. But her aspirations are perpetually dissed, squashed or outright sabotaged by Beatrice who cannot countenance anyone succeeding at anything.

Beatrice is marginally kinder to Ruth (well played by Skye Coyne), a troubled girl-woman who is extroverted but emotionally unstable and subject to epileptic fits. The bond is likely due to the fact that Ruth poses little danger of becoming a success.

As Tillie’s science experiment blossoms, Beatrice is increasingly drawn to destroy it and everything around her until a booze-fueled crisis brings the three characters into a devastating collision.

Amazingly, despite a soul-searing climax, Zindel penned an optimistic coda about the perseverance of the human spirit and the value of mutated growths like the marigolds and Tillie. This is where this production and maybe Zindel’s script stumble. After displaying an emotional landscape laid waste by Beatrice, suddenly we’re treated to a sanguine ending that does not seem credibly justified by what we’ve seen in the previous two hours.

One of Hayes’ judgment calls seems to have been to soften some of Beatrice’s razor edges. While that robs the early scenes and even the play as a whole of some of the dramatic punch, it allows us to feel compassion for a complex human being crushed by decades of external forces that have deformed her soul, more Medea than monster. Hayes and Zindel infect you with the unnerving thought that there but for the grace of good fortune, go you. It also gives Turnbull a more moderate place to start her character’s descent.

We’ve written for years that Turnbull is one of the region’s finest actresses. She looks like the soccer mom next door, but her characters always seem to be barely sublimating abysses of angst and anger. Her cuckolded wife was one of the glories of Actors Playhouse’s August: Osage County a year ago and her lengthy list of triumphs include the stunned wife in GableStage’s The Goat or Who Is Sylvia? in 2003. For all the skill and technique she brings to her roles, her performances are especially notable for their seamless naturalism. A charming woman in person, Turnbull here fearlessly becomes a horrendous creature so wrapped in her own pain that she has little comprehension or regard for anyone else.

Praise must be saved for Oser in the completely wordless role of the frail husk of a human being roundly abused by Beatrice’s harangues, whose eyes barely register a cup of hot water slammed in front of her, and then go dead again as the woman’s mind slips in and out of the world around her. Oser delivers a terrifying and brilliantly executed portrait of senility that is far more eloquent than two-thirds of the performances we’ve seen in this terrific season. Compare it to the vital, incisive senior she played in Caldwell Theatre’s After the Revolution, if you can recognize the same actress.

Zindel’s Off-Broadway play won the Obie in 1970 and the Pulitzer Prize in 1971, and it provided admired actress Sada Thompson (later of TV’s Family) with a reputation-making role. Two years later, Paul Newman filmed the play with Joanne Woodward in the lead. Zindel wrote several other plays, teleplays and children’s books before he died in 2003, but never scored the same level of critical and popular success. But Marigolds is rarely revived and not well-known other than for the oddity of its title and its place on lists of prize-winning plays.

This is baffling because besides offering juicy acting roles, Zindel’s writing has the same lyricism as Tennessee Williams: ecstatic when Tillie is describing the wonders of the cosmos, plain but indirectly poetic when Beatrice is railing in agony at the injustice of life.

Ridiculing Tillie’s talk about the half-life of radioactive elements, Beatrice says to her family and Nanny, “Half-life! If you want to know what a half-life is, just ask me. You’re looking at the original half-life! I got stuck with one daughter with half a mind; another one who’s half a test tube; half a husband – a house half full of rabbit crap – and half a corpse!”

Set designer Mike Amico has created an intentionally drab living room, the retro-fitted remains of an old vegetable retail store which itself exudes a sense of hopelessness. As always, Amico is a master of tiny details down to the lightshades, all of which are slightly askew. It’s evocatively lit by Sean Dolan who coats the stage with a dappled effect when Tillie is absorbed in her reveries about of science.

There’s a slight sense that this production could become more pungent and the ending a little more credible as the cast explores the script during the run. But it’s well worth catching at any point. 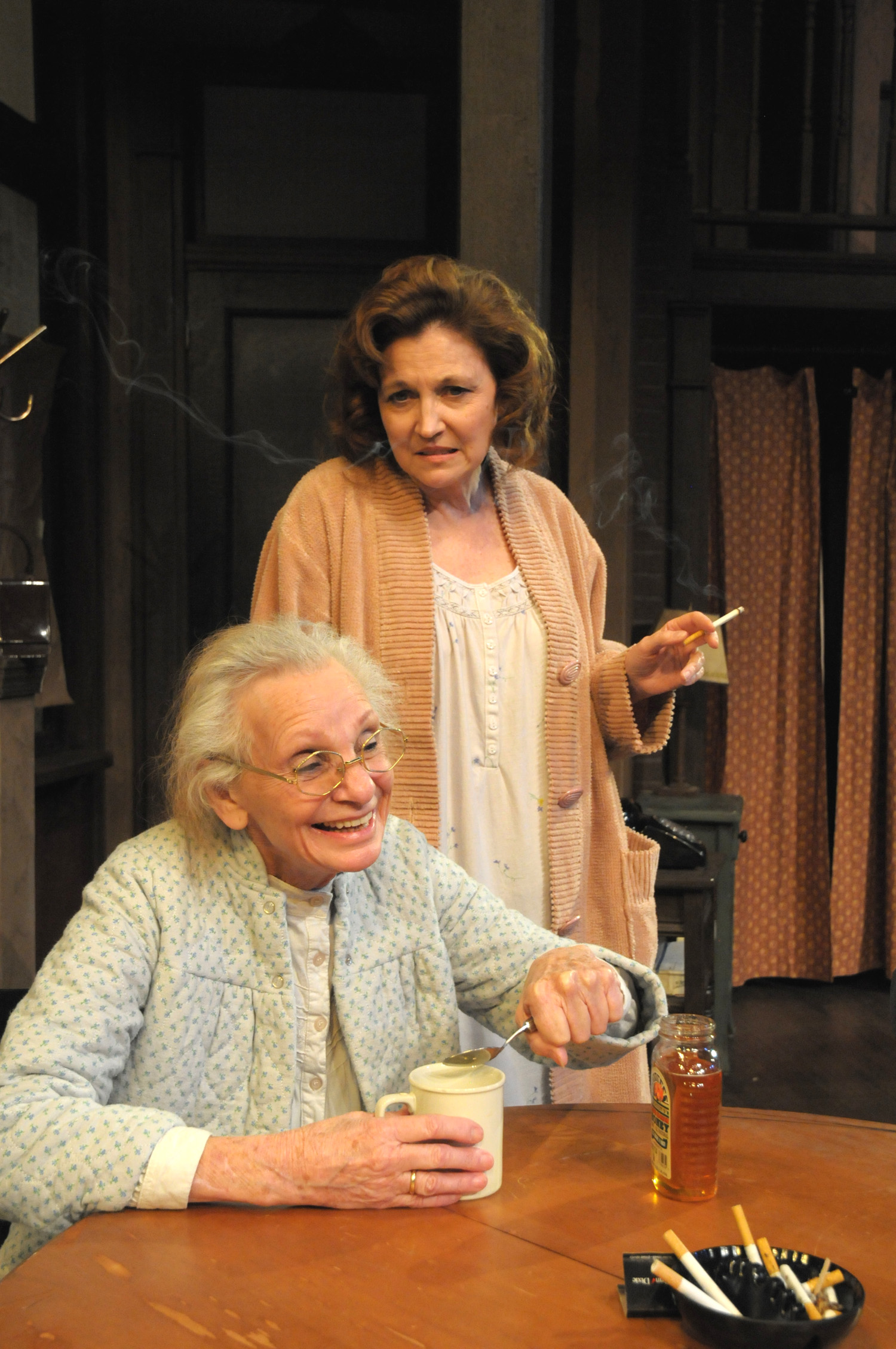