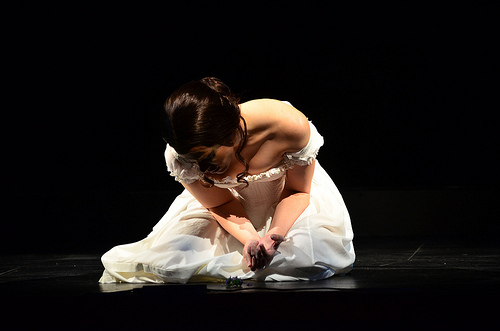 You don’t have to be a musicologist or opera aficionado to recognize the stunning meld of emotion and technique in the artistry of Rachele Gilmore’s performance of the title role in Florida Grand Opera’s production of La Sonnambula.

When she falls to her knees at the front of the stage, picked out of the darkness by a few lights, and pours her heartache out over the orchestra into the audience, the utter silliness of the libretto vanishes and listeners are transfixed by the seamless transmission of heart and head.

Gilmore, who hit an A flat above high C in her debut at the Metropolitan Opera, is more than enough reason for an opera fan to scrape together the considerable cash needed to see this classic tale about a young woman whose impending marriage is sidelined by scandal because of her unconscious habit of sleepwalking.

While her technical virtuosity and vocal pyrotechnics are stunning throughout the sadistically wide range that Vincenzo Bellini wrote into the bel canto score, it is Gilmore’s infusion of passion, ranging from ecstatic joy to bottomless grief, that pushes her performance into another dimension.

Playing the simple country girl Amina, Gilmore exudes an innocence and purity in her singing and personality that seem an impossible fantasy in this century, but which she persuasively sells to back reaches of the orchestra seats.

Tenor Michele Angelini is less emotionally affecting as her fiancé Elvino in his FGO debut, basically grasping his lapels or gesticulating and then slamming out his arias. But his voice deftly soars and dips with Bellini’s lovely melody line. His personal performance also seems to ratchet up a notch anytime he is paired in a duet with Gilmore.

The 1831 opera has a ridiculous plot that Mother Goose would have been ashamed to pen – it’s a mystery why Amina doesn’t kick Elvino to the curb after he doubts her virtue based on less than circumstantial evidence. Then it would be a much shorter opera, although the first hour is almost nothing but the lovers singing about their undying devotion over and over – and over.

But Bellini provided generations of singers with gorgeous melodies and sketchy musical frameworks that allow them to show off their chops without competing with – or protected by, some would say – a swelling orchestra that might drown out their mistakes. Relative spareness aside, conductor and FGO Musical Director Ramon Tebar enthusiastically leads the musicians in laying down a spirited and passionate foundation for the singers to build upon.

The expressive vocal performances also benefit obviously from the decades of experience that famed soprano Renata Scotto brings to the job as stage director. But even though she is duplicating her 2007 work at Michigan Opera Theatre, her staging is pedestrian and presentational at best, relying primarily on static tableaus with singers simply coming down the lip of the stage and declaiming their arias as if this was 1913 instead of 2013. Compare that to the imaginative fluid direction of FGO’s La Boheme and The Magic Flute earlier this season.

Further, while savoring the music is the priority, the pacing of this production is beyond languid. Some of this is dictated by the score, but a good director would fill the lengthy musical transitions with some kind of significant action other than someone grasping another’s arm in greeting and whispering in their ear.

Technical theater note to lighting designer Donald Edward Thomas: When Count Rodolfo sings in scene two, it might be advisable to shine even a little light on him singing in the darkness; ditto, when Amina begins her famous second act aria, try lighting her above the waist.

Another staging misstep is The Tree – the primary piece of set design by Carlo Diapp. Traditionally, Amina’s innocence is proven when the townspeople spot her sleepwalking in some dangerous situation like perambulating along a cliff or over a rickety bridge. Here, she suddenly appears four stories up in the crook of a massive tree where she apparently was teleported by the crew of the Starship Enterprise. When she walks out onto a shaky limb and a branch breaks off, it’s actually laughable.

But opera is never about plausibility; it’s about immersing yourself in a bath of sound, and the sparkling grace of Gilmore’s soprano nearly banishes any question about how she looks so good with so little REM sleep.

When Amina sings, “My lips can’t express what is in my heart,” that’s okay, because the way Gilmore’s voice rises and falls on the melody lines like a bird negotiating wind currents, it doesn’t matter.