Posted on February 8, 2013 by Bill Hirschman 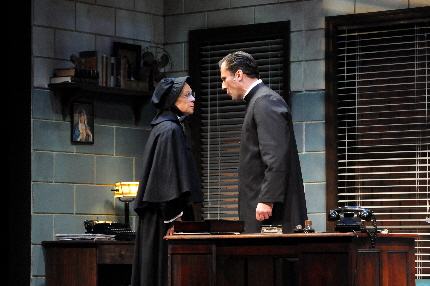 Calibration can be unforgivingly crucial in staging plays like Doubt: A Parable when it is essential that audiences leave the theater with precisely that titular uncertainty.

That’s because John Patrick Shanley’s play at the Maltz Jupiter Theatre is not about the truth of whether a priest has molested an altar boy. It’s about the unanswered question whether we can ever know Truth and how we cope with the ultimate unknowability of all things, both temporal and divine.

So the Maltz production under J. Barry Lewis’ direction merits being seen for three finely-crafted performances by Maureen Anderman, Jim Ballard and Julie Kleiner, plus an outstanding portrait by Karen Stephens.

But thematically, it’s thrown out of whack because the deck seems stacked toward one truth for much of the play and then irreversibly stacked the other way. Few people will leave this production indecisive about the priest’s guilt or innocence. That misstep undercuts the point of the play and turns it into a cautionary tale about the dangers of certainty rather than the conundrum of uncertainty.

On the other hand, this is the kind of play and production in which that fine-tuned calibration can change nightly. What I saw may not be what you see the next night. Heck, so much of this is perceptual and susceptible to personal baggage that what I saw may not even be what the fella across the aisle saw the same night.

Doubt tracks an investigation by Sister Aloysius (Anderman), the martinet principal of a parochial school in the Bronx in 1964 when ecclesiastical reforms were clashing with hidebound traditions. She’s suspicious from the outset of the likeable and handsome new parish priest Father Flynn (Ballard). But her instincts are inflamed to the point of obsession by a report from the idealistic young teacher Sister James (Kleiner) that the school’s only black student left a meeting with Flynn seeming upset and with liquor on his breath.

Even with the Church in flux, this remains a patriarchal society in which gender trumps everything ; Sister Aloysius is severely restricted in what she can do. As a result, her inquiry only accumulates hints and statements that can be interpreted at least two ways. For most of the evening, the crime is so abhorrent that it’s never spelled out. The references are so oblique that it underscores the shakiness of the accusation. A battle ensues between the two older clergy with the younger nun both used and wooed by both combatants.

Shanley deftly penned a conflict in which the audience’s allegiances are supposed to flow back and forth between antagonists who are polar opposites. Sister Aloysius is simply not likeable. You can admire her discipline, devotion, sincerity and eventually her courage, but she is a steely authoritarian who dismisses kindness and compassion as luxuries that pose dangers. When Sister James nearly breaks down at her superior’s evaluation of her teaching ability, the young woman cries, “I thought you were satisfied with me.” To which, Sister Aloysius says evenly, “Satisfaction is a vice.” Later, when Sister James says she cannot believe Father Flynn would do harm, Sister Aloysius answers, “You’d trade anything for a warm look.”

Flynn exudes geniality and empathy. His sermons delivered directly to the audience are imbued with profound compassion. When confronted by Sister Aloysius, he seems far less concerned with his reputation on a personal level so much as how such a claim will cripple his ability to serve the parish.

In an attempt to gather evidence, Sister Aloysius asks the boy’s mother (Stephens) to come to her office. The visit, perhaps the strongest scene in the play, does not go as anyone expects.

Finally, Sister Aloysius and Father Flynn have their showdown in private. It encompasses a moment in which everything turns inside out. I’ll argue that the cast and director did not conquer that vital scene opening night because when it’s over, many people should still be unsure, perhaps even more conflicted. But the scene is played in such a blunt unambiguous way that doubt vanishes. That destroys the very last beat of the play and gives a completely different meaning to the last line then I think Shanley intended.

That said, this team has mounted an insightful thought-provoking production highlighted by Lewis’ trademark of leading an earnest cast through an excavation of every moment, peeling back layers of meaning in Shanley’s script and then skillfully communicating their findings to the audience.

Anderman unreservedly dives straight into Sister Aloysius’ flawed nature, portraying someone who cares not a whit about being liked, caring only about being an effective instrument for the greater good, no matter the cost to herself or anyone else. She submerges herself in Sister Aloysius’ severity in both appearance and affect. She carries herself as if her shawl is weighing down her shoulders.  When she hears Sister James praise Flynn’s homily, she responds, “His sermon last Sunday was poetic,” spinning the last word with a slight twirl of disapproval.

Fresh off playing the patrician wife in Palm Beach Dramaworks’ A Delicate Balance, Anderman makes it easy to believe that the nun has lived a chastening life in the real world before taking the veil and that her willingness to bend the rules to achieve justice comes from her pragmatic appreciation for how the world works.  This is tough role because we must admire the purity of her motives while questioning the accuracy of her obsession with evil.

Ballard is a fine actor whose underrated work as the beleaguered husband in Mosaic Theatre’s Side Effects and whose portrayal of the anguished man in Dramaworks in All My Sons were essential to the successes of both shows. Here, his linchpin performance is the one that needs more shading and ambiguity, but he makes a solid adversary for Anderman.

He delivers Flynn’s genuine warmth and his compassion for frailty that borders on humanism. With the lilt of a Boston outsider’s accent, he measures the phrasing of his sermons to capture the audience’s sympathy from opening monologue. When he cries out in the voice of the afflicted, “Are we alone?” he does make you wonder, as you should, whether that empathy is born out of his own need for forgiveness.

Kleiner works hard to bring plausibility to the young woman who says, “I want peace of mind” in a terrified tone that it will never come again. She makes it clear that Sister James could not have imagined two authority figures actually being in conflict. She doesn’t completely escape making Sister James a bit of a squeaky-voiced simpering naïf, but that’s what Shanley wrote and it’s tough for any actress to make such ingenuousness credible.

All three are solid, but it’s Stephens’ performance in just one scene that turns on the light switch. Lewis has kept a lid on the emotional intensity through the production up to this point, perhaps because Sister Aloysius must proceed gingerly. But the electricity starts flowing from Stephens’ appearance and on through the rest of the play. Stephens inhabits a stunningly pragmatic character whose decisions on paper are seemingly indefensible, yet she makes the woman’s internal logic absolutely convincing.  Her acting is so smooth, so absent acting tricks, so convincing that you can’t see how she does it.

One aspect that this production underscores is the rigid male-centric hierarchy which enabled abuses and which institutionalized the demeaning of women. Sister Aloysius understands that Flynn can pull rank anytime he wishes and crush her efforts. Neither can she leapfrog over the ineffectual parish monsignor and approach the bishop. No doubt, there is little justice likely to be achieved here.

This is the Maltz, so impressive production values are a given, starting with Timothy Mackabee’s set, ranging from the oppressively institutional principal’s office to the high brick walls keeping the modern world outside.

Marty Mets’ sound design is outstanding, not just for the clarity of the actors’ speech, but for the inventiveness of his aural soundscape. He takes advantage of the Maltz’s multiple speakers to ensure that atmospheric chimes emanate from different points around and behind the audience. He weaves in soft, almost subliminal sounds, like the voices of children on the playground in the moments before Father Flynn gives his first sermon. Paul Black’s lighting ranges from the cold illumination of Sister Aloysius’ office to the autumnal shadows of bare tree branches falling across the red brick walls of the school.

In this ever-mutating 21st Century world in which many people seem to require certitude in every facet of their belief system, regardless of contravening facts, the Maltz production raises questions about unyielding convictions.
Side notes: This only runs two weekends, so if you’re interested act now. Also Andrews Living Arts, the tiny company based in Fort Lauderdale, is also running a production of Doubt through Feb. 23. For more information, see andrewslivingarts.com.