My Back Pages: In Middletown, Detached Formalism Hamstrings A Touching Narrative 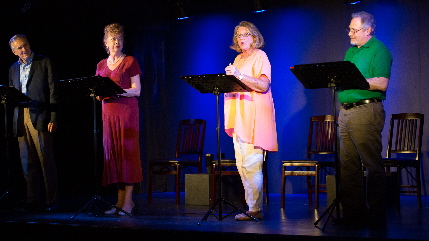 If Dan Clancy’s Middletown, enjoying its world premiere at the Levis JCC this month, sounds familiar, it’s because the play already graced Boca Raton stage lights in a more embryonic form. It played for a night in March as part of Jan McArt’s New Play Reading series at Lynn University, and if you saw that staged reading, the “full production” will look only marginally different: Downstage sit four music stands, upon which lie the Middletown scripts, and behind them chairs for actors to rest when they’re not in a scene.

So it’s a reading? Pretty much. In a note in the playbill, Clancy prefaces, “The production you will see is performed exactly as the play was conceived and written. This is a simple and straightforward story which is meant to be read by the actors.” In other words, there’s nothing wrong with your television; those bars on the screen are supposed to be there.

Forgive my skepticism or, worse, the feeling of being baited and switched, of expecting kinetic direction and memorized lines and receiving flipped pages and actors whose enforced stillness rivals the Kraftwerk guys at one of their concerts. There is award-winning precedent for this approach, of course, with A.R. Gurney’s Love Letters being the perennial actors-reading-on-a-stage warhorse, and Middletown shares its life-encapsulating scope. Nearly 50 years pass from the play’s introduction to its conclusion 95 minutes later, and sweeping changes occur in the lives (and deaths) of its characters as they succumb to the march of time.

At least they’re not simply reading correspondence to each other—that’s a good start—and in fact, Middletown benefits greatly from lowered expectations. It’s so inauspicious in its staging that it almost has nowhere to go but up, and once the actors acquiesce to the inherent limitations, they manage to bring out the humanity in a story that will touch you with unexpected poignancy.

Middletown opens with its only noticeably “off-book” monologue, with Peg (Angie Radosh), the show’s richest character, explaining not only the play’s self-reflexive conceit but also its central theme. “It’s a play about remembering,” she says, which any critic would be remiss not to jot down; it’s always nice when the actors do some of our job for us.

Peg is 82 when she opens her memory bank for our inspection and commiseration, and the whole of Middletown plays out in flashbacks dating from 1976 to beyond the present day. It centers on the friendship she strikes up with Dotty (Barbara Bradshaw), which begins outside a New Jersey kindergarten after they’ve deposited their divergent daughters for their first day of school, and continues for the rest of their lives. We learn how Peg met her scholarly husband Tom (Peter Galman)—a meet-cute in a bookshop—and about Dotty’s uncharacteristic barroom pickup of her future blue-collar beau, Don (Peter Librach). And we eavesdrop on their decades of friendship, which they nurture with weekly dinners at their favorite Italian restaurant.

Along the way, life’s blessings and regrets, its comedies and tragedies play out, from infidelities to grandchildren to diseases. There is nothing groundbreaking here, but its stock in trade is relatability; Middletown taps into a vein of shared experience that will resonate especially with Boomers aging along with the characters (“My face has more lines than a sonnet,” Dotty quips into a mirror, a been-there, done-that line delivered pungently by Bradshaw). But its sheer volume of content ensures that at least a smattering of these lives will echo your own or a loved one’s, regardless of your generation.

There is some humor in Middletown, but Clancy’s best observations feel etched from life’s unpleasantries: Tom discussing the absurdity of his siblings gifting their father with new work clothes after he’s given a dire cancer prognosis, or of his weighing the lesser of two evils after he develops his own life-threatening ailment. Or of Peg responding to her husband’s admitted affair with the soul-crushing response, “You just scooped out my stomach.” Director Peter Pileski is right to add a few extra beats after her delivery, to let the gravity of those seven syllables sink in.

Typing that line, in fact, does little justice to Radosh’s performance of it. In a show in which even uber-capable actors, who would have no problem memorizing their contributions to a 90-minute ensemble show, occasionally fumble their lines while turning the damn pages, Radosh transcends the limitations. She communicates more with a gaze, in fact, than with dialogue. The look of barely concealed distress that washes over his visage even in the seeming best of times expertly forecasts the show’s most emotionally shattering sequence—set, non-exploitatively, during 9/11.

With Radosh’s waterworks turned on and off as efficiently as a spigot, her marvelously calibrated exercise in repression and explosion punctures the heart of every scene in which she participates, and frankly leaves the others missing her presence. For the rest of the cast, I couldn’t help but detect a rigidity in their performances, subconscious or otherwise, that chafes against the restrictions of the pages and music stands. If they did want to break free, I could hardly blame them; I’d be the first one to steal the keys and unlock their cells.