Not Enough Heat Or Coherence In Saturday Night Fever 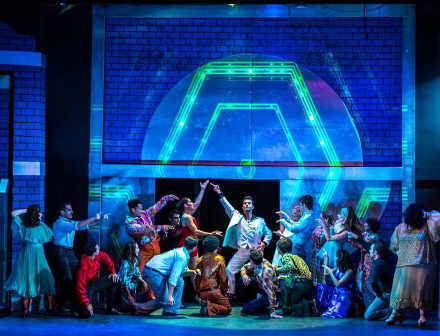 Talent, energy and enthusiasm strut across the Broward Stage Door production of Saturday Night Live – The Musical. Unfortunately, this company does not have enough of those virtues to rescue this misconceived material that should stayed a film.

Saturday Night Live – The Musical is and always will be a license to print money. The initial 1998 London stage version moved two years later to Broadway where it played 501 performances. It then had 38, count ‘em, 38 separate full-fledged productions and extensive tours across a dozen countries including this one, and three versions aboard cruise ships.

The advance sales for the show have been among the best this year, said co-founder/producer Derelle Bunn. She was hesitant whether it would be attractive to her (this is my words) “decidedly senior mainstream condo audience.” But director Kevin Black noted that the film was 40 years old and a cultural touchstone for her current audience.

Indeed, theater patrons around the world have been seduced in advance by fond memories from their youth or middle-age, flashing back on the 1977 film by John Badham.

If you need us to review the plot about Brooklyn stock boy with a dream and a pompadour who discovers life, lust and self-esteem in a disco, you’re not going to be interested in going to this anyway.

Otherwise, you’ll remember how John Travolta gave a surprisingly nuanced breakout performance exuding charm, a lost boy vulnerability and steaming sexuality. Norman Wexler penned a reasonably intriguing script about dreaming to escape an unpromising future. Lester Wilson and Deney Terio provided electrifying choreography previously unknown across much of the country other than Studio 54. And, of course, David Shire’s soundtrack relied heavily on the Top 40 BeeGees songbook, sung like an offscreen Greek chorus stating musically what these characters were too inarticulate to express.

But the stage musical in performance (such as the national tour that came to South Florida some years ago) is blunt, ham-handed and often incomprehensible unless you‘ve seen the film. So while there may have been many stage productions, I doubt many people have seen it more than once.

It’s not that director Black, his creative team and his cast are not working hard, bless ‘em. But Badham’s film worked because of a alchemical brew specific to film.

On stage, the subtleties of character are lost. Everything is depicted in cartoonish strokes. In the especially benighted second act, plot points are ticked off so quickly that newcomers will have difficulty following them. Even for devotees, the developments are rushed by with little time for the drama to sink in. One character dies, but the show doesn’t grieve very deeply or very long.

Among other inherent flaws, these songs are being sung on stage by the characters. The genius of the film was that these were ordinary people from the streets who would never get caught dead singing even to themselves, let alone crooning to an auditorium full of ticket buyers. On film, you bought them as people. On stage, they are performers. The high-profile songs have been injected into the plot – not deftly but appropriately. Still, you can sense the writers arguing, “So where do we put this song? We can’t leave it out. The audience would kill us.”

The elephant in the theater, of course, is the absolute requirement: an actor playing Tony Manero who has enough charisma and talent — not to make you forget Travolta; that would be impossible— but to make the role his own. Stage Door hired Daniel Velasquez who has played the role before. He is handsome, a decent actor and singer, a solid dancer, relatively comfortable in the part and courageously makes no attempt to mimic anyone else’s performance. But he doesn’t have that “something extra” that could overshadow the work’s flaws.

The rest of the cast is just passable except for the terrific Kat Gold who raises the roof as a disco diva belting out numbers like “Night Fever” and “Nights On Broadway” as everyone else dances, and Bruno Faria as Bobby C, Tony’s troubled running buddy. Faria not only has a fine voice but he’s probably the best actor on the stage. Sandi Stock does her considerable best with the whiny hanger-on Annette whom Tony unforgivably treats like manure.

Well, no one is going to be nominated for a Carbonell for their acting here, but then again they are saddled with this script. The one used in the misbegotten national tour was memorably miserable. But reportedly, it has been rewritten and rewritten. The original bookwriters are no longer credited, replaced by the guy who rearranged the music and threw in four of his own songs that you’ve never heard before. It still isn’t any good.

Bunn and Black have put 20 people on stage, and credit that corps for exuberantly giving their all, especially in the dance numbers. To be accurate, they do a solid job with Danny Durr’s classic disco finger-pointing “Jive Talkin'” choreography, but the lifts and other physically demanding pas de deux moves are sluggishly executed at best and clumsy at worst. The entire production has energy but no heat or heart.

Black, a pro responsible for several of Stage Door’s recent success in musical offerings, has staged this as well as he can. Musical Director Michael Friedman has done the same. Sean McClelland sets the show in an inexplicably weird cobalt blue brick environment with rotating sections – all of it enhanced by Black’s projections. Jerry Sturdefant bravely clothes the cast in embarrassingly accurate costumes.

Look, this show has been staged on six continents, really, and Stage Door’s effort does have the BeeGees music competently sung to a digital track. It’s going to sell well.