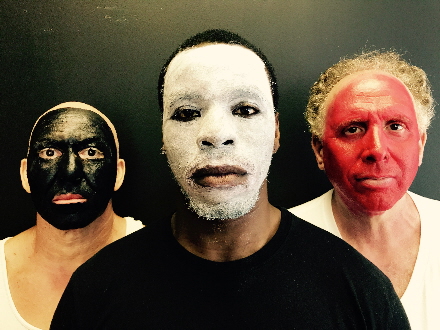 An African-American character bearing the same initials as the drama’s playwright will sit before the audience and make himself up in whiteface. He will be the audience’s guide through a highly theatrical reimagining of an 1859 melodrama rife with ethnic stereotypes, racial slurs and a stark reminder of lynching.

There will be raucous comedy, biting satire, choreography, music by a piano and cello, chilling indictments of prejudice, and upsetting moments as audiences are forced to evaluate how far America has come or not come at a time when race relations still are being writ in fire, fury and blood.

The play is Branden Jacobs-Jenkins’ 2014 scathing off-Broadway triumph An Octoroon, which virtually defines the adjective “provocative.” And no matter the quality of the production that the courageous Area Stage Company actually delivers with the Florida premiere next week, it is inarguably going to be unlike much, if anything, that audiences have seen on a South Florida stage.

An Octoroon is a Brechtian play within a play within a play that won the 2014 OBIE Award for Best New American Play. The lead character is known as BJJ (the real author’s initials), a black playwright who wants to present an actual 19th Century potboiler called The Octoroon (not An Octoroon) by the real-life Dion Boucicault. But he tells the audience that his plan was endangered when all his white actors quit. So BJJ starts to swath his face in white paint.

The over-the-top melodrama tells of a virtuous young woman with “one-eighth black blood” who has lived a privileged life as a white woman in the pre-Civil War Deep South on her “uncle’s” Louisiana plantation. When the uncle dies, the property is on the verge of being sold to an overseer. But she is bound to be sold along with it since, as someone with mixed blood, she is considered property. The original play was meant to be a progressive call for justice, but it was shot through with outrageous stereotypes.

But to further issues of identity, justice and labels, Jacobs-Jenkins takes everything into a surreal dimension with male characters portrayed in blackface, whiteface and redface, including BJJ who portrays the uncle’s true white heir as well as the evil overseer.

The evening promises to be challenging in several ways, cast members said.

Robert Richards Jr., who plays BJJ, said of the racial epithets, “Some of the language is going to be difficult for some people to hear. It can be very jarring just because it’s language we hope not to hear people speak anymore.” While “I have white friends who say don’t say that word around me, it opens up the dialogue (about) issues that deal with social constructs that we have as far as labels go within our society.”

Even the finale will puzzle some patrons. Mallory Newbrough is best known for recent success this year playing Janis Joplin in Beehive and Belle in Beauty and the Beast. “I also think when the play ends the entire audience will think, ‘Oh, that’s what happened.’ (But) I think every single person in the audience is going to have a different idea of ‘what happened,’ where (in) other shows and musicals you know they lived happily ever after and that’s what happened. This one is much more open to interpretation, I think.”

Gil Kaufman, who played a mysterious character in Area Stage’s The Nether in 2016, said, “My hope is for the reaction of the audience is that they walk out saying ‘Wow’ and each one is going to have a different ‘Wow.’ ”

Newbrough added, “The first thing I think when I’m describing this play is ‘We’re going to have a lot of walkers.’ But I’m accustomed to doing shows up in Boca Raton so I don’t know the Miami crowd. But if we were doing this up in Boca, we’d have people getting up and getting out of their seat all the time. So I’m excited and curious to see what lines will make them get up and leave.”

The timing, though not intentional, could not be more fraught with resonances of the past year or two.

That is exactly what Area Stage Artistic Director John Rodaz hopes for.

“I identify with it to a certain degree. I’m Hispanic. When I was (working) in New York with the name John Rodaz, nobody knew I was Hispanic unless I told them I was Hispanic. So, therefore, I played British roles. I played Italian roles. I played Arab roles …. When I got back to Miami, (Coconut Grove Playhouse Artistic Director Arnold) Mittleman only gave me Cuban roles,” he said.

“All of a sudden I became a Hispanic actor. I became a Hispanic director. I felt like I had all of this weight on my shoulders and I said, wait, I’m proud of my heritage but there’s more to me than that, and I think that’s what (Jacobs-Jenkins is) saying….It’s about labels. It’s about being categorized and pigeonholed…. It’s about race in this country. You look at (Jacobs-Jenkins) and they don’t say, ‘ there’s a playwright, but there’s a black playwright. Why can’t they just say there’s a playwright? Racism perpetuates itself. The Octoroon was a progressive play for its day but it dealt with all these archetypes that we still have today. And these labels persist and they persist and they persist.”

The production also reaffirms the re-development of Area Stage as a venue committed to thought-provoking work. The company was founded in 1989 by John and his wife, Maria Banda-Rodaz, in a 49-seat theater at 647 Lincoln Road in Miami Beach. Year after year, it reflected the couple’s commitment to theater that challenged audiences.

“When we were out on the beach, we did (plays by Samuel) Beckett and (Harold) Pinter. People said, ‘Pinter? Are you out of your mind? No one’s going to come see that.’ Wrong. We were packed. We were doing original work. People came in from overseas. They said, we don’t care what you’re doing, we just want to make reservations. We did Kvetch. Lisbon Traviata, (one of) the first gay plays (produced in Miami-Dade) with a naked man on stage.…We never really tried to cater to an audience…. We would do work that we thought was interesting…. And we were able to find an audience,” Rodaz said.

But after ten years, skyrocketing expenses for the increasingly tony business district forced the company to close. The couple stayed busy at other stages and Rodaz headed Hollywood Playhouse for a time. In November 2008, the company moved into the 250-seat Riviera Theatre in a Coral Gables strip shopping center at 1560 S. Dixie Highway. But its mission had changed to emphasize a conservatory to train young actors, singers and dancers from ages 5 to 24.

The new programs became popular enough to enable the company’s survival. While its older students undertook increasingly ambitious and sophisticated titles like Rent, the adult work slowed to a trickle.

Then about three years ago, the couple revived their professional productions. Last season, it produced Jennifer Haley’s The Nether about a future technology that enables pedophilia and sadism, and Annie Baker’s Circle Mirror Transformation.

An Octoroon is in the same aesthetic vein.

The result is a growing loyal audience of like minds, many of them parents of conservatory students, thereby creating an enviably younger audience than other area theaters rely on.

“We’ve never ever chosen something because we felt the audience was going to like it. (If you do) I think you’re betraying something in yourself, you’re betraying the whole reason you’re doing this. We like to choose work that is always, naturally thought-provoking and different and challenging and daring. So I think the audience gets used to that. If we start doing Hello Muddah, Hello Faddah, we’re going to lose our audience,” Rodaz said.

“At my age, I’m not going to waste my time with work I don’t feel connected to, that I’m not passionate about. It’s a lot of time, a lot of money, so it has to be something I have to do or die.”

Banda-Rodaz, the executive artistic director, said, “The Area Stage brand has been able to carve a niche in the cultural landscape of South Florida because of works like this. We have never been a commercial entity…. I say this, not with arrogance, I say this with pride, we’ve always pushed the line. We have pushed our actors. We have pushed the audience.”

The company also faces a more prosaic but equally serious challenge. The theater that it occupied for nine years has been sold to a company that will level it to build a Publix and apartments.

“We’re looking at three or four options,” Rodaz said. “We’re looking at buying a building. We’re looking for community support. We’re putting together a committee. We just have to see what comes through. But we’re working at it. It’s not easy.”

It won’t change their vision nor what they produce.

“I just want people to understand who we are: We take risks and they should take risks as well. Going to the theater has been described as going on a hunt for something, to discover something…. People should know that is going to be challenging. They’re going to be provoked. It’s going to be hard. That’s what we want to create.”