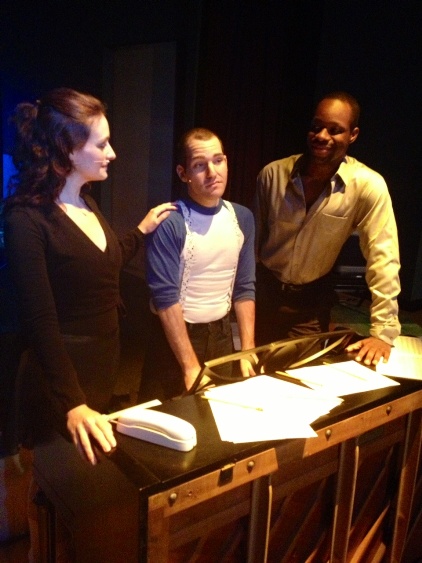 If Jonathan Larson had lived, he would be 53 years old. But the legacy of Rent’s composer/lyricist remains two works that laser-target the timeless angst of young adults struggling to preserve their ideals in a pragmatic world demanding compromise.

Outré Theatre Company, itself a fledgling troupe of young adults striving for a creative and financial footing, has mounted a smooth and solid production of Larson’s other produced work, the semi-autobiographical rock musical tick, tick…BOOM!

Built around an impassioned and winning performance by Mike Westrich as Larson’s stand-in, Artistic Director Skye Whitcomb and Music Director Kristen Long have created an emotionally satisfying evening worth the trip to Boca Raton.

Its pop rock score and nimble lyrics are not as accomplished as what Larson wrote for Rent, but those evolving virtues can be recognized even by the musically untrained ear. More trenchantly, it contains a dozen lines calling for a new musical theater that speaks to Gen Xers and Millenials. The fact that we know that Larson would (a) accomplish that goal and (b) die tragically of a brain aneurysm a few years later adds a layer of pathos to the artistic declaration of independence.

tick opens with nascent composer/lyricist Jon (Westrich) in full fret neurosis about the impending confluence of a workshop production of his Superbia and his 30th birthday. Trying to help him through it are the people closest to him. Girlfriend Susan (Sabrina Lynn Gore) is a dancer pressing Jon hard for a more settled life outside the harsh realities of New York City. His boyhood buddy Michael (Jerel Brown) traded in his unrewarded talent as an actor for the lucrative life of a corporate executive – an option Michael dangles as a promising possibility to Jon. As Jon hears his life clock ticking, he wrestles with profound doubts whether his artistic ambitions are just self-indulgent fantasies of an extended adolescence, not worth the emotional and financial sacrifices. His ensuing journey of self-realization is almost ritualistic in its predictable arc, but the three characters and their choices will resonate, especially with young people facing a similar dilemma in 2013.

Outré staged a moving concert version of the show a year ago during its fund-raising start-up period. It starred Westrich and Gore, plus Clay Cartland who’s currently serving in Actors Playhouse’s comedy Fox on the Fairway. Freeing the actors from their music stands means Whitcomb can have them run, leap and roam the network of ramps and platforms surrounding Long’s four-piece band. His staging is simple, but he paces the show well and brings out the emotional core of the piece.

tick reaffirms Westrich’s emergence as a promising talent enhanced by an engaging charisma. He won plaudits for the ever-morphing characterizations in Island City Stage’s Twentieth Century Way, his woebegone Charlie Brown in Outré’s reading of Dog Sees God and his Princeton in Slow Burn Theatre Company’s Avenue Q. His Jon here has a kind of 21st Century riff on Woody Allen’s likeable neurotic urbanite with jangly nerves. He is blessed with a fine voice that can kick butt when lusting after a BMW or fervently caress ballad lyrics like “How can you soar / if you’re nailed to the floor.”

Gore, who starred as Queenie in Outré’s The Wild Party, exudes a smoldering sensuality and vocal vulnerability her rendition of Superbia’s signature number “Come To Your Senses.”  Brown, who played the protective friend in Slow Burn’s Side Show, is also effective in such numbers as “No More” and his duet with Jon, “Therapy.”  Gore and Brown also play various characters slipping in an out of Jon’s world such as his parents in White Plains, his AWOL agent and the beguiling leading lady of the workshop.

All of the singers occasionally miss a few notes, but their full-throated voices are suffused with energy and passion that make up for the rare vocal misstep.

Outré had some serious technical problems in its maiden show, The Wild Party, but they seemed to have overcome most of them. Danny Butler’s sound design under Giordan Diaz’s stage management adapted early on and enabled the lyrics to be comprehensible most of the time. Stefanie Howard’s lighting was emotionally evocative although it seemed awfully fidgety, switching many times in the course of a single number.

Long did a fine job guiding the cast through the interweaving vocal arrangements and led a first-rate band that included Butler on guitar, David Carrey on bass and Mark Annino on drums.

A side note: musical theater legend Stephen Sondheim, who is both Larson and Jon’s idol, figures into the show several times. But nowhere is it more welcome than Larson’s hilarious spoof/homage “Sunday” which is modeled closely on the Sondheim song from Sunday in the Park With George. The catch is that the song is   Jon and two coworkers bemoaning their day jobs working the weekend shift as waiters at a trendy retro diner, with such lines as “Sunday, in the blue, sliver chromium diner….”

Like much of Larson’s legend, the origins of tick are often glossed over for dramatic simplicity. Larson wrote the piece as a solo show for himself in 1990 to explore and presumably vent his pained frustration after the real Superbia languished following a workshop. After his death and the success of Rent, friends hired playwright David Auburn (a Pulitzer-winner for Proof) and arranger Stephen Oremus to transform it. Auburn streamlined the script, expanded the piece to three actors and assigned the newcomers multiple roles as well as songs of their own. Oremus tweaked the score and rearranged the solos into lovely three-part harmonies. It bowed off-Broadway in 2001, winning an Obie for Miami’s Raul Esparza playing Jon.

tick closes Outré’s first full season which opened with the ambitious large-cast cult musical The Wild Party which never overcame its sound problems. But Outré followed it with a triumphant production of Avi Hoffman in the harrowing anti-war play, An Iliad.

Whitcomb and Managing Director Nori Tecosky are trying hard to bring a vibrant brand of modern theater to South Florida. This can be seen in their next season’s titles: a reading of Flashing Lights, a new play by Edward Excalibur; a concert version of off-Broadway’s hit rock musical of 2009 Bloody Bloody Andrew Jackson; a likely unique take on Much Ado About Nothing, the cult musical Grey Gardens about the eccentric Beales; and Noel Haidle’s caustic edgy and pitch black comedy, Mr. Marmalade.
tick, tick…BOOM! runs through June 9 from Outré Theatre Company, performing at The Studio at Mizner Park, second floor, 201 Plaza Real (the former Cartoon Museum), Boca Raton. Performances are 8 p.m. Fridays and Saturdays, 2 p.m. Sundays. Tickets are $20 for students, others $30. Call (954) 300-2149 or visit outretheatrecompany.com.