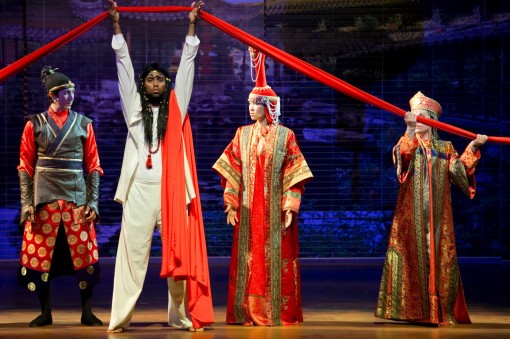 "The Red Thread" runs through May 27 at the PlayGround Theatre. Photo: Pavel Antonov

A huge horse grown from a tiny jade statue carries the heroine aloft over the vast plains of western China. We have already seen her gingerly traverse a rope bridge and clamber up the side of a treacherous mountain. We spot black-garbed ninjas moving scenery accompanied by exotic music and we will see an actress stride by in a fantastical regal costume with a headdress that seems taller than she is.

The Red Thread, an original Chinese fable getting its world premiere at The PlayGround Theatre, is unabashedly children’s fare recognizable by its broadly-sketched plot, a plucky heroine and a few sugar-coated morals.

But the staging is as imaginative as anything produced by any other company in the southern half of the state, no asterisks or reservations. Adults will be transitorily gobsmacked by the sensory experience and children will be entranced throughout the intermissionless 90 minutes.

To be curmudgeonly fair, even though the show is embroidered with a few jokes aimed at chaperoning adults, the pace is soooooo stately and deliberate that many grown-ups are likely to fidget in their seats like kindergartners at several points.

It started from the first image Saturday, a show curtain made up hundreds of red threads streaming from the top of the stage like a crimson downpour and slid aside sensuously by a white-garbed black man with dark hair flowing past his shoulders.

There was the red-roped monkey bridge almost silhouetted against an azure backdrop spanning the stage and a dark cargo net standing in for a mountain range that the heroine climbs on her odyssey.

It ended with a stunning coup de theatre that transformed the entire stage, something you have to see for yourself and we won’t spoil here.

For theatergoers unfamiliar with the company, PlayGround was co-founded by Ansin with the idea that children’s theater must have all the artistic rigor as adult theater ‘ just be a lot more joyful for children. For six years, it has created highly imaginative, slickly produced, theatrically sophisticated, multi-cultural works adapted from existing literature and played in rotation like an opera repertoire with a repertory troupe of Equity actors. Besides selling tickets to adults and families, it buses in thousands of schoolchildren for free daytime performances.

The Red Thread, partly underwritten with a $100,000 grant from the Knight Foundation, is PlayGround’s first wholly original piece and it has been developed over three years by Ansin, and chief designer/co-author Fernando Calzadilla.

Unlike some of the theater’s earlier shows such as’The Love of Three Oranges and’Alice’s Adventures in Wonderland, this work seems a little more sober, a lot less fun and missing PlayGround’s trademark scenes during which youngsters get wound up in audience participation.

In eastern China, a brilliant weaver (Jesus Quintero) is working on his masterpiece. Tired of living in poverty, his older daughters (Kate Shine and Melissa Almaguer) steal the work. The youngest daughter (Christina Jun in a consistently compelling performance) journeys a thousand arduous miles west across the Silk Road to recover the tapestry. Her quest leads her to a mystic (Troy Davidson) who teaches her the virtues of meditation in problem-solving. With the aid of the magic horse, she recovers the tapestry from a prince she falls in love with (Christian T. Chan) and returns home to rescue her ailing father — and still wins the hand of royalty. Everyone dances in the end, including the groom’s imperious mother (Marjorie O’Neill-Butler).

The actors never perform like adults condescending to children. They play each emotion for the reality that they can elicit from the situation, although, frankly, the material has no subtlety and neither do the performances. But it’s for kids, you know?

What is subtle and repeatedly overwhelming is the fusion of unbridled ‘what if’ creativity and calibrated artistic discipline. In one classic Joseph Campbell test-on-a-quest scene, our heroine must make a specific image out of a tangram, that jigsaw puzzle made up of triangles, parallelograms and squares. Except here, the pieces are a yard wide, carried on tall sticks by black-garbed ninjas, illuminated by black light and seemingly flying under the sway of a red bamboo pole.

Ansin’s creative team each deserve a Carbonell Award (although the theater is inexplicably not eligible) including the idiosyncratic choreography by Octavio Campos and the music by Luciano Stazzone, which combines traditional Asian sounds with an electronic undercurrent.

But standing above all are the stunningly integrated costumes, set and lighting designs by Calzadilla under Ansin’s direction. Other than the baroque wedding clothing and royal robes, Calzadilla’s costumes are not so much ornate as deftly designed. His set is backed by stage-high legs of wide wooden Venetian blinds; they give him a beige canvas to wash with morphing colored lights. Then he adds minimalist set pieces: two exquisite chandelier lanterns, swaths of red cloth across the stage shaken by stage hands, dark draperies to indicate the pit in the cavern where the prince is held Rapunzel-like, massive Oriental stick puppets of various sizes to chart the magic horse’s flight.

You’ll have to ask a young child whether the whole thing works for them (although PlayGround has yet to register many dissatisfied customers). For children old enough to drive, drink and have filled out a few IRS 1040 forms, the story doesn’t mesmerize, but the pageantry is truly magical.