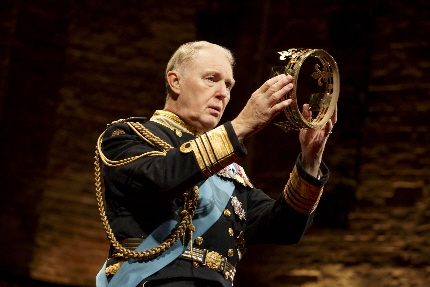 This is the power of the play King Charles III: Six weeks after seeing it, I found myself at intermission of a local show last weekend still raving about it to other audience members. So much for the ephemeral nature of theater.

The West End hit is only playing through the end of this month at The Music Box so the all-Brit cast can go home to star in BBC mysteries while performing Greek tragedies at the National. So if you are in Manhattan during the next four weeks, remember you can always catch Hamilton next summer, but Charles will be gone and you will regret not seeing it.

There won’t be a national touring company and – as much as I endlessly praise the versatility of our local acting pool – we don’t have enough first-rate classical actors in Florida, at least ones who look like the current Royal Family. The classical training is crucial because this modern day narrative is told in blank verse with long stretches of iambic pentameter.

King Charles III, subtitled by its author Mike Bartlett as A Future History Play, starts out as a farcical lark and deepens in gravity until it ends as a tragedy of Shakespearean proportions.

The premise is that Queen Elizabeth has died, leaving as king the ineffectual Charles who even in England is something of a risible figure. Charles may be well-schooled in the trappings of monarchy but he knows that he is woefully out of his depth to be a leader of anything.

While Charles is automatically king by virtue of the centuries-old tradition, he won’t be formally crowned in Westminster for another month. This provides an opening for the new prime minister to try to wrest the last vestige of power away from the monarchy and put it in the Parliament. He does this by proposing a Draconian revision of public rights in the popular name of privacy, starting with a law to muzzle an irresponsible free press. Ceremonially, the monarch is supposed to sign legislation. Ironically, it is Charles who sees the seemingly outmoded monarchy’s true purpose as an independent check and balance on the lawmakers much as the executive branch does in America. So he balks.

This is far from dry esoterica as the swirling political wrangling becomes a vital life-and-death struggle for the good of the country. But Charles has other problems. The highly elegant but ambitious Prince William and his lean-and-hungry Kate see this as their opportunity to take the throne; they begin working with the Parliament forces to undermine Charles before the coronation. Also being drawn in against his will is the hedonistic Prince Harry and his Goth girlfriend Jess.

Charles starts out as a comically woebegone figure resembling those life-sized Spitting Image puppet characters (which actually make a brief appearance). But as Charles realizes his responsibility to the people and fears the Parliament’s fascistic tendencies, he courageously gains gravitas, stature and a conscience-driven call to push back. At that point, the play takes several major turns before it spirals into its tragic finale.

Bartlett’s skill as a dramatist is evident in the thematic, narrative and character arcs that investigate modern political institutions, family dysfunction, ambition, greed, courage, accepting your destiny, on and on. But it’s not some ponderous castor-oil-is-good-for-you piece; it’s also quite funny for much of the evening to the point that some horse-blinkered British critics deemed it a “light entertainment.”

The subtitle is no accident, obviously. The play intentionally echoes a raft of Shakespearean plays and characters from William’s unfaithful Prince Hal to Kate’s Lady Macbeth to Charles who starts as an indecisive Prince Hamlet and ends up as King Lear. Plus there’s the ghost of Princess Diana rather than old Father Hamlet.

But what is stunning is the verse dialogue, which is lyrical, totally appropriate to the characters and situation, and comprehensible to audiences willing to pay attention. Within those confines, Bartlett combines Bard-like soliloquies, rhymed couplets, poesy and utterly contemporary argot. Using the formalized verbal structure to depict modern people and situations underscores the archaic quality of a country that still clings to its constitutional monarchy. And all this is from the playwright who wrote Cock, the blunt scathing and up to the moment contemporary play about love, labels and sex produced by GableStage in 2013.

The production is deftly and swiftly mounted with ritualistic flourishes and considerable wit by Rupert Goold, who directed Patrick Stewart’s grisly Macbeth a few seasons back. The production values here are quite simple, although expertly manipulated. But he has a flair for touches such as having everyone appear briefly in the Guy Fawkes masks familiar from the film V For Vendetta.

None of this would work if not for the performances from highly-trained experienced actors apparently on vacation from the Royal Shakespeare Company or the National Theatre. Given the breadth of such talent over there, it’s not surprising that Goold found physical doppelgangers for their real life counterparts.

But the spotlight belongs on Tim Piggott-Smith as Charles. Although he has worked on stage his whole career, he may be best remembered as the evil policeman in the PBS series The Jewel In The Crown. His face, which can seem demonic or vulnerable, is familiar from scores of films and TV guest appearances demonstrating his wide range.

But this is his crowning achievement in a precisely calibrated performance. His Charles starts out and, indeed, ends as a somewhat befuddled creature. But what we initially find comical, like an awkward dinosaur stumbling toward a tar pit, becomes a figure of worthy of compassion as he finds the backbone to fulfill a duty he neither sought, expected nor feels equal to (nor is he). Piggott-Smith’s Charles is imbued with a simultaneous sense of fatal mustiness and an easily relatable sense of human fallibility.

Again, South Florida’s acting corps has no greater champion than this critic. But the obstacle to mounting this with local talent for a regional production is simply that you can count on your fingers the number of actors living here who have mastered this rarified level of classical acting – and they get precious little opportunity to exercise that craft.

So catch this now in New York.