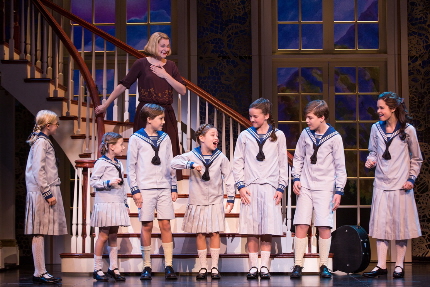 How do you solve a problem of taking a 56-year old American musical classic and making it fresh for a modern audience? If you’re director Jack O’Brien, you lovingly dust the tarnish off of The Sound of Music and imbue it with a freshness that’s as crisp as the snow-covered Austrian Alps.

The hills are alive in this new touring production of the old chestnut, mostly because of O’Brien’s vision, which includes younger casting than usual for the actresses who play Maria and Mother Abbess, yet maintains a respect for the old-fashioned piousness of the sisters who inhabit the Nonnberg Abbey.

Richard Rodgers and Oscar Hammerstein’s story about a spirited postulant whose impish ways get her sent away from the nunnery to serve as governess for seven children of a widowed Naval Captain won a 1965 Academy Award for the film’s director Robert Wise, who had scriptwriter Ernest Lehman fiddle with the original book to expand the story for the big screen.

O’Brien, however, returns to the original libretto by Howard Lindsay and Russel Crouse instead of the more familiar movie version, which means there’s no puppet show during “Lonely Goatherd” and no kid-fun bike ride, either. But it isn’t missed since O’Brien has stripped away the gimmicks in lieu of character development.

For instance, there’s no more one-dimensional stern Mother Abbess. Possessing an incredible voice, Ashley Brown, who originated the role in Broadway’s Mary Poppins, doesn’t only nail “Climb Ev’ry Mountain” as the first act closer, she creates a backstory for the Mother Superior, full of vulnerability and nostalgic emotion.

When she shares with Maria that she, too, grew up in “those mountains” and encourages Maria to sing and to follow her heart, there’s a longing that perhaps she was that girl. And when the actress sings the signature “Mountain,” that emotion swells, too, reaching out and grabbing the audience. There were a few tissues passed around in my row to dry some damp eyes at intermission.

O’Brien himself touts his discovery of Kerstin Anderson to play Maria Rainer. The 20-year-old was a sophomore in musical theater at Pace University in New York when the director found what he had envisioned Maria to be – not a 46-year-old actress like Mary Martin was in the original, but someone closer in age to how Maria is written – as O’Brien describes her: “a young renegade, a country lass, a climber of trees.”

Anderson plays Maria with a wide-eyed, gosh gee, Peter Pan-ish twinkle. She’s innocent and joyful, which makes it all the more believable when nearly everyone can’t resist her charms. Anderson sings the familiar “My Favorite Things” and title tune “The Sound of Music” with such warmth, honesty and nuance that the songs don’t stand alone, but actually further the script, something that’s been lost over the years because of the tunes’ over exposure.

Even the children, again through O’Brien’s vision for his 21st century “Music,” develop character arcs – Paige Sylvester as Liesl grows from rebellious teenager to heartbroken woman; Svea Elizabeth Johnson as Brigitta who “notices everything” is given the role of being the eyes and ears of all that’s going on (hence the decision to outfit the child with glasses – subtle touch, but so emblematic).The other kid actors develop what they can including MacKenzie Currie as Marta, Maria Suzanne Knasel as Louisa, Jeremy Michael Lanuti as Friedrich, Quinn Erickson as Kurt. The role of Gretl, the youngest child, is always a tough casting choice and Audrey Bennett nabs “awws” from the audience even before she opens her mouth.

Dan Tracy’s Rolf, Liesl’s love interest, grows, too, from lovestruck schoolboy to Nazi soldier. Tracy and Sylvester transfix the audience with moving dance in the gazebo, which takes the audience back in time to a time when teen romance was sweetly naïve.

Not everything is as perfect. Teri Hansen as Elsa and Merwin Foard as Max Detweiler seem like they were plopped into this Sound of Music from another production since they stick with the cookie-cutter characters seen so often in these supporting roles. While each of them have wonderful voices, they don’t equal the depth of character that is so prominent in the production.

There’s a small ounce of spark missing between Anderson and Ben Davis, who plays von Trapp. He almost seems more suited to the stuffy Elsa since the character never sheds his skin to become the softer, gentler version that wants to share Maria’s zest for life.

Musically, two songs that weren’t in the film, “How Can Love Survive?” and “No Way To Stop It” are sung by Elsa, Max and von Trapp and are interesting bookends in many ways. “Survive,” about the toils and troubles of rich couples, “two millionaires with a dream who reach their goals in a comfy old Rolls or in one of their Mercedes.”

“No Way To Stop It,” political in nature, has Max and Elsa trying to convince the nationalistic naval man to cooperate with the Nazis. The two songs add the element of more adult themes rather than the usual sugar overdose that is sometimes pervasive in overly kid-friendly productions. The songs work on some level, yet on another slow down the action.

Douglas W. Schmidt’s richly comfortable set of the von Trapp family home and the sparse, yet exquisite, interior and garden of the Abbey have an impressionistic quality that provides an almost storybook feel. His large Nazi flag backdrops that fly in from above are perfectly menacing. Jane Greenwood’s costumes, especially the famous children’s play clothes that Maria sews out of curtains, prove why this veteran costume designer received a Lifetime Tony Award in 2014.

The Sound of Music was the final collaboration written by Rodgers and Hammerstein, while “Edelweiss” were the last lyrics Hammerstein wrote. The duo would have reveled in this new view of their American musical theater masterpiece. Put this show on your must see list for a dose of what possibilities look like in the new year.

The Sound of Music from Broadway Across America runs through Jan. 3 at the Ziff Ballet Opera House at the Adrienne Arsht Center, 1300 Biscayne Boulevard, Miami. Running time: 2 hours 45 minutes including a 20-minute intermission. 8 p.m., Thursday through Saturday; 2 p.m. Saturday; 1 and 7 p.m. Sunday. Tickets, $29-$145. For information call (305) 949-6672 or visit www.arshtcenter.org.

This entry was posted in Performances, Reviews and tagged Broadway Across Miami, Jack O'Brien, Kerstin Anderson, The Sound of Music. Bookmark the permalink.