Riverside’s A New Argentina And A New Look At Evita 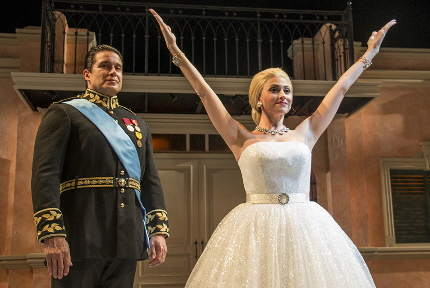 The musical may have been around for decades, but Riverside’s triumphant production of Evita proves that the show has a strong universality that rings as loudly today as it did 40 years ago.

The show brims with exhilarating invention and the fresh point of view by its director/choreographer, Tony Award nominee Marcia Milgrom Dodge. Indeed, Dodge finds the sensual, provocative and sobering center to the story and delivers a human look at the notorious Eva Peron and the oppressive world she navigated.

Audiences see how Eva, maligned by society, uses her only resource, sex, to lift herself from the lower class to the top of power and marry Argentine military strong man Juan Peron. Beloved by the working class who lovingly call her “Evita,” she helps form the dictator’s base of support and his rise to political power.

Dodge doesn’t flinch in this politically-charged musical. Along with her talented cast, we see the frightening reality of how self-interest motivates dictators and how their struggling base rejoices in the bread crumbs.

The winner of seven Tony Awards, Evita is an epic story told with grand, theatrical gesture. Created by the legendary team of Andrew Lloyd Webber and Tim Rice, its score and lyrics make for a powerful musical/rock opera blend. And Riverside’s music director Ann Shuttlesworth and her 11-piece pit orchestra meet every big sound with muscle, fury and romantic nuance.

Presented on scenic designer Michael Schweikardt’s beautifully crafted unit set, the action begins in a dance hall where townspeople have gathered and are warming up, seemingly for an evening of Argentine tango. An announcement comes on the radio: Eva Peron has died. The dancers weep and moan, converge and then part, revealing, Evita, a goddess in that exquisite white, Christian Dior gown. It’s like Barbie-doll perfection, revered by the working class and promising a life they can only imagine. But she is theirs, and they love her.

Lights shift, scenic units fly up and we go back in time to see Eva as an impoverished little girl trying to give flowers to an important man. He spurns her. She suddenly emerges as the grown young woman still bearing the lower class scars.

With a thorough sweep of emotion and impressive voice, Natalie Cortez forges a sensuous and commanding portrayal of Eva. She electrifies the stage both with the beautiful, melodic songs like the magnificent “Don’t Cry for Me, Argentina” which has that delicious slow tango refrain; and  “A New Argentina,” one of the bolder pieces rife with Rice’s tricky, heady lyrics and Webber’s forays into jarring musical passages ripping through polite society.

Just as the show explores the jolt of social change, so too will Evita traditionalists notice something fresh in a few directorial concepts here.

Traditionally, the role of “Che” is presented as that of Che Guevara, the Cuban communist fighter who befriended Juan Peron. Here, Che is a youthful reporter, always with a pencil and notebook, recording the truth. It sends chills in the second act when he calls out “La Prensa, one of the few newspapers which dares to oppose Peronism, has been silenced, and so have all other reasonable voices!

In the Che role, Angel Lozada brings lyrical voice and precision throughout, especially in “High Flying Adored” and in “Another Suitcase in Another Hall,” which he sings with sweet-voiced Iliana Garcia.

Another change comes in “The Art of the Possible,” which introduces Juan Peron. Traditionally, this is done as a game of musical chairs. Here, the generals appear in muscle shirts and play large drums strapped around them. This raw, tribal concept rips off social niceties of the game and reveals the frightening power wielded by would-be dictators. You don’t want to be on the wrong side of any of these men.

As Juan Peron, Enrique Acevedo has strength and delivers vocally. While we would like to see more heat between him and Eva, we do see how well matched they are in their quest for power, especially in the number, “I’d Be Surprisingly Good for You.”

One of the standout numbers in the show is “Peron’s Latest Flame,” sung by the haughty aristocracy and the rough hewn military. Here, they engage in a kind of pas-de-deux singing their disdain for Evita. Sly, understated adjustments of canes, umbrellas and physical stances accentuate musical nuances. The enticingly precise choreography thrills in both its humor and threat.

Dodge, who was nominated for a Tony Award for the Broadway revival of Ragtime, squeezes out every ounce of energy from her capable ensemble in “And the Money Kept Rolling In.” Unlike the somber moves of the opening, here, the public, led in song by Lozada’s Che, exult over what they reap by Peron’s heedless economic policy. It is exhaustive, resonating number with bold choreography as good as it gets anywhere.

Lighting designer Yael Lubetzky carves mood and time into the scenes. She and scenic designer Schweikardt work in harmony to hold the audience in the overall visual aesthetic throughout. Costume designer Richard St. Clair goes the complete distance and then some in a smart, artistic and beautiful array of costumes from the earthy colors of working class poor to the upper classes’ palette evocative of cream that rises to the top. Especially nice is Eva’s blue and white dress with yellow accented sunburst and petticoat —  evocative of the Argentina flag.

Another sweet touch is adding a lone accordion player, Erica Mancini, who turns up occasionally.

This is sensational theater. Forty years ago, Webber and Rice crafted a wonderful, big show. Riverside Theatre and its theater artists step up big time, creating a visually beautiful show filled with great choreography and music. It excites and satisfies immensely while reminding us that Evita still reflects our world. Simply do not miss this.