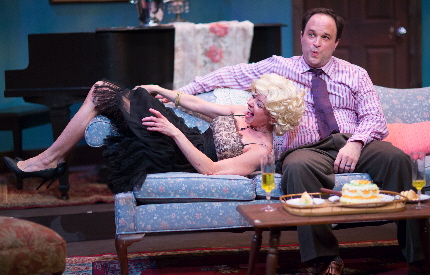 Charm, that most underrated of quiet virtues in a theater of brassy belters and in-your-face spectacle, suffuses the vagaries of a 24-year love affair in Broward Stage Door’s appealing revival of the gentle Same Time, Next Year.

The romantic comedy about two married people who meet once a year for a passionate tryst gets a note perfect rendition from actors Jacqueline Laggy and Matthew Korinko guided by director Andy Rogow.

Bernard Slade’s well-constructed 1975 script now feels a bit dated and even a shade contrived as the six scenes check off touchstones that take us on a socio-political tour of the early 1950s through mid-1970s from the flight to the suburbs, through the divisiveness of the Vietnam War protest, the rise of women’s liberation and beyond.

But the character-based comedy and the observations about the nature of enduring relationships prove timeless and downright winning, especially due to the performances and direction.

Opening in 1951 right after their first night of illicit love-making, we see George, a neurotic accountant from New Jersey, who has connected over dinner with Doris, a lovely housewife. George comes to this northern California seaside cottage once a year to do the books of vintner friend. The Oakland wife comes annually to a Catholic retreat more to reevaluate about her predictable life than for religious reason. Both are relatively happily married (with asterisks) with three children each, yet something in each other clicks, first sexually and then emotionally. Both have to work their way through guilt, although Doris is far more self-possessed about the situation.

Then we meet them every five years or so, as they settle into a once-a-year weekend routine, each scene reflecting the social changes occurring around them and the personal changes inside such as Doris educating herself and starting a business, and George becoming more politically conservative.

But mostly, they talk about the lives, their hopes, the highs and lows of their marriages, even exchanging pictures of their children. They help each other through births, deaths, economic changes, achievements and setbacks as far more than friends – something approaching a one-weekend-a-year marriage without the benefit of clergy.
Rogow, the co-founder of Island City Stage who won wide praise for his direction of Daniel’s Husband, is in sync with the classic comedy timing that Slade honed on stage and in television (Trivia: Slade was a co-creator of The Partridge Family, The Flying Nun and Bridget Loves Bernie). Under Rogow’s pacing the show never feels pokey, and he ensures that the snappy repartee feels genuine in these actors’ hands rather than left over bits from the Borscht Belt. He and his cast elicit considerable laughter along with some moments when throats tighten if the tear ducts don’t open.

Credit is due to Michael McClain set design of the homey and comfortably changeless cottage bedroom under wooden trusses where the duo have their assignation. Peter Lovello dresses the couple in embarrassingly period perfect wardrobes from a Jackie Kennedy pillbox hat to a pair of blue-jeans with an appliqué on the back side backside.

For those keeping count, the original 1975 Broadway productions ran for three years, initially starring Charles Grodin and Ellen Burstyn who won a Tony. In 1978, Burstyn reprised her role in a film version with Alan Alda.

The Broward Stage Door edition does not, and did not aim set the place on fire. It’s a gentle smile of a production, which may be just what we need right now.