Betting ‘All In:’ Act 2 As The Wick Theatre Buys Its Home 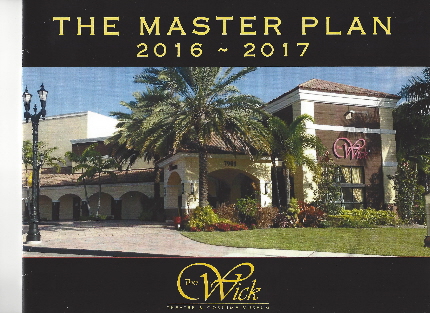 Three years and one month ago, Costume World founder Marilynn Wick announced she would lease the former home of the Caldwell Theatre Company and open a new producing company in the Boca Raton venue in a four-year deal with Legacy Bank.

She said at the time, “Four years to get it going. If we’re not settled in by then, it’s not going to happen.”

On April 28, she will sign a $5 million mortgage with small business specialist Newtek Business Services Inc. and take formal possession of the building.

The deal, formally titled to and guaranteed by Costume World and Wick personally, kicks off an ambitious vision to double down on a proposition many theater insiders scoffed at given her lack of experience in running a theater company, let alone a facility.

Without any smugness, but a bit of sassy pride, she said Friday nearing the close of her third season, “For all the naysayers, I know they’re unhappy right now.”

But it’s only Scene One of Act Two: She has started a $5 million fund-raising campaign, is finalizing a summer of short-term events and is changing over the entire contents of her adjacent Costume Museum. She has begun medium- and long-range planning that encompasses sending a show out on the road this fall, creating a children’s theater program for the summer of 2017, building an orchestra pit, and, crucially, mounting a push to grow from 2,800 subscribers to 5,000.

She knows these and the other projects on her list are ambitious, but she can joke about it: “I don’t do anything small. I’m my own trap.”

Financially, the theater’s non-profit operation is not “in the red; we’re sort of breaking even,” Wick said. About 30 percent of the operating income comes from ticket sales. The balance derives from patrons’ donations, cash from Wick personally and Costume World corporately. But she said “a couple of hundred thousand a month” is generated by the affiliated for-profit operations: her Costume Museum in the same building, concession sales, a gift shop, rentals to other groups and her restaurant meant to echo New York City’s famed Tavern on the Green. She said from the beginning that those synergistic operations would play a key role in financial viability of the theater’s operation.

But the mortgage purchase frees the company to move ahead with projects like the orchestra pit and raising the stage ceiling to provide space to fly scenery in and out. 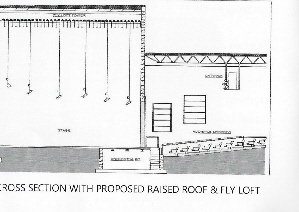 The pit, not expected to be built for another season yet because it will be dug out from under the stage, is especially telling because the Wick Theatre has been criticized for using digital recorded music much of the time – although she still expects to use “tracks” from musicals requiring the sound of large orchestras.

Although raising the stage ceiling is a long-term project, she plans this summer to reinstall a system so that the lighting and scenery grid above the stage can be raised from its current location 19 feet above the stage up to the roof at 24 feet “just so we can move in the scenery we’ll be using next season.”

Other changes include the recent hiring of a New York-based casting agent, although Wick now believes in leaning heavily toward casting local talent now that she knows the pool better. She plans to bring on a corporate board of directors who will add both donations and expertise. A legendarily strong-willed hands-on administrator, she plans to find board members who will trust her judgment.

The product, primarily classic warhorse musicals, has been warmly received by its older patrons and recognized with 13 Carbonell nominations and three wins.

The productions and assorted extras such as after-parties with live entertainment reflect her belief that theatergoers want a lush full-fledged experience.

She has a bent toward hiring name stars (or at least performers known by Broadway aficionados) for her marquee: Broadway veteran Lee Roy Reams starred in La Cage aux Folles and broke ground starring in the title role of Hello, Dolly!, an ill-fated production of Mame with Leslie Uggams, the Lennon Sisters performed for a Christmas show, and she has lined up Andrea McArdle for next fall’s They’re Playing Our Song.

The ticket prices range from $58 to $80, a shade on the high side for the region, but discounted tickets are often available on websites.

It has not been an easy ride. Wick admitted up front her inexperience and said at the time, “I’ll learn.”  She seemingly has learned, albeit the hard way.

The theater staff has gone through significant turnover at almost level of the operation. She angered live musicians by changing to digital recordings when the players thought they had been hired. But an unofficial stable of directors, staff members and actors/dancers is beginning to coalesce. The company has received patrons’ donations but is still in need of significant continuing largesse.

Missy McArdle, her long-time associate going back to the early days of Costume World, said admiringly, “The learning curve was massive. This particular aspect was unknown to her. It is awesome how much she learned.”

Wick’s edge, McArdle said, has been her extensive experience running several business ventures including one that specialized in rescuing and resurrecting failing companies.

Asked what Wick knows that theatrical artists don’t know when they start up theaters, McArdle said, “They’re romantics. This is a business.”

For instance, Wick says she needs to keep the place open and operational during the off-season. On June 10, she plans to announce a full slate of events in concert with brunches and dinners at the Tavern. Among the ideas are a murder mystery play along with gourmet food courses, after-dinner shows offering different programs of show tunes, country-western, rhythm & blues, ‘60s rock, a banjo band, even cooking classes from the Tavern’s master chef.

She hopes there will be little down time for the nearly 30,000-square foot cream-colored jewel box at 7901 N. Federal Highway. The building opened in 2007 as the new home of the Caldwell Theatre Company, one of the most prestigious theaters in the region. But it shuttered in 2012 when Legacy Bank foreclosed on two mortgages totaling $5.89 million plus another $1.3 million in interest and late charges. It had fallen victim to a long list of problems that included a shrinking base of subscribers and debts.

Wick’s Costume World, reportedly the largest theatrical costume distributor in the country, signed the lease with Legacy Bank in March 2013 with an option to buy it. Transforming the facility required an initial investment of about $1 million, Wick has said. The venue, a fine base for plays, did not have extensive enough sound and lighting equipment for musicals, she said. Upgrading was required while the building’s interior was remodeled, in part to turn the back quarter of the facility into a new home for her costume museum.

After a flurry of renovation, the venue opened in September with The Sound of Music. The production was well-received by audiences and most critics. It picked up a best musical Carbonell nomination and Lourelene Snedeker won best supporting actress for her work as the Mother Abbess.

At an age when most of her peers have settled into comfortable retirement, Wick continues churning away undimmed.  The secret to success, she said, is discovering in each business that “there’s a foundation, a formula to this and you have to figure out what it is.”

“You can be scared. But you have to be smart enough to figure it out.”

This entry was posted in Features and tagged Marilynn Wick, Missy McArdle, The Wick Theatre. Bookmark the permalink.