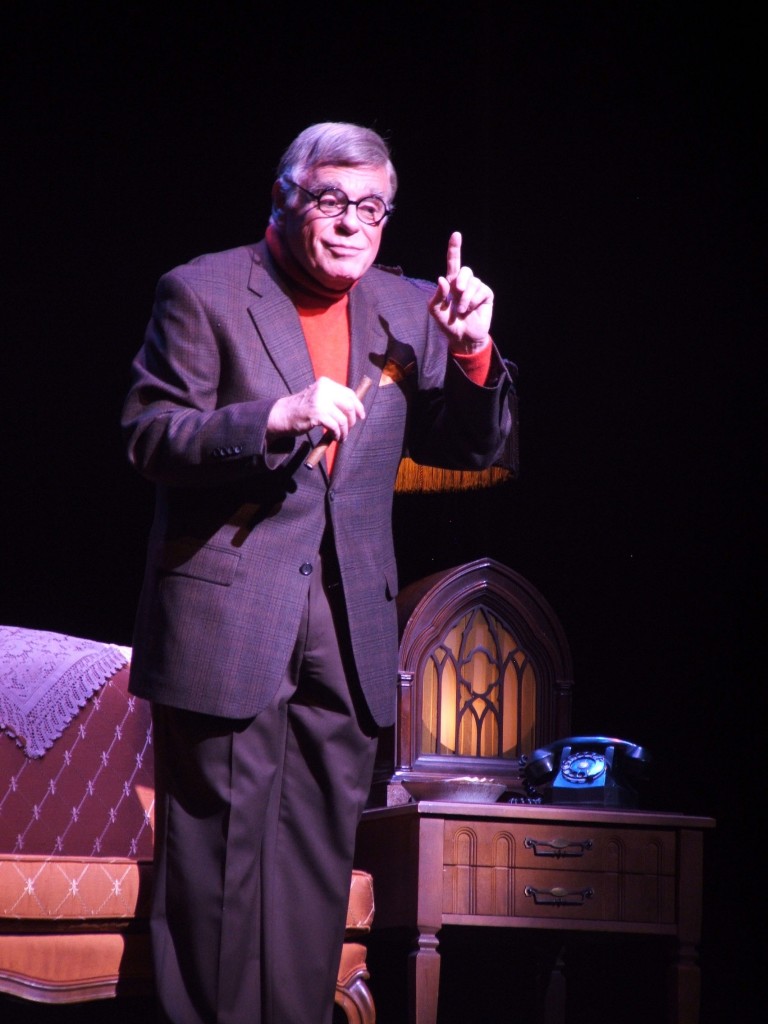 It’s grossly unfair to expect an actor to impersonate an icon who remains vivid in the audience’s memory, but watching the most recent incarnation of Rupert Holmes’ biographical Say Goodnight Gracie at the Aventura Arts & Cultural Center, you just keep wishing George Burns was there.

Yes, the deadpan straight man to comedienne Gracie Allen and author of her zany comments has been dead for 15 years. Holmes’ one-man play, in fact, posits Burns at age 100 telling his life story to God to find out whether he’s going to heaven to join his beloved wife.

So it’s gutsy of actor Joel Rooks to take Burns’ persona out on a national tour. He looks just a little like Burns with the stooped walk and the wide thin smile. He understands how to give a performance and get laughs out of Holmes’ wise, warm and witty script.

But he’s not George Burns. No one is. And what made George Burns terribly funny were the unique qualities that he owned exclusively. Burns had a craggy voice, an insolent sparkle in his eye, comic timing second only to Jack Benny, and a dry droll delivery that is nearly impossible to duplicate.

Nearly but not completely impossible, because when impressionist/actor Frank Gorshin originated the part in 2000 at the Broward Center before a Broadway run, he practically channeled Burns from beyond the grave. Even he could not recreate the inimitable Burns precisely, but he had enough of the cadence, the attitude, the aura that you weren’t distracted by Burns’ absence as you are here.

The shortfall is especially noticeable when the play throws up film footage of Burns and Allen routines onto a movie screen at the back of the stage.

Perhaps decades from now, when a future generation sees the play and has no memories to compare it to, a hard-working actor like Rooks will be able to get past the expectation of certain mannerisms and sounds, and people can recognize his success in bringing out the underlying emotions of Holmes’ tale.

Because Holmes’ script remains a gem of hilarious wit and heartfelt emotion. Drawn in part from Burns’ writings and performances, Say Goodnight Gracie is far more than a very funny stand-up comedy routine retelling a life beginning with Burns’ poverty-stricken childhood on the Lower East Side. Holmes (author of Curtains and The Mystery of Edwin Drood) crafted a touching love story that stretches from when the Jewish song-and-dance man Nathan Birnbaum meets the Catholic Grace Allen as a potential partner in a vaudeville routine. He wrote them an act in which Burns fed straight lines to Allen’s ditzy doyenne character and then stood back to look askance at her “illogically logical” stories. The bulk of the saga covers years of mutual devotion and adoration that lasted not just until her death of a heart attack, but for decades afterwards as George visited Gracie’s gravesite for a weekly chat.

There’s nothing wrong per se with Rooks, he certainly gets laughs with the  material, but the Burns’ magic isn’t there.