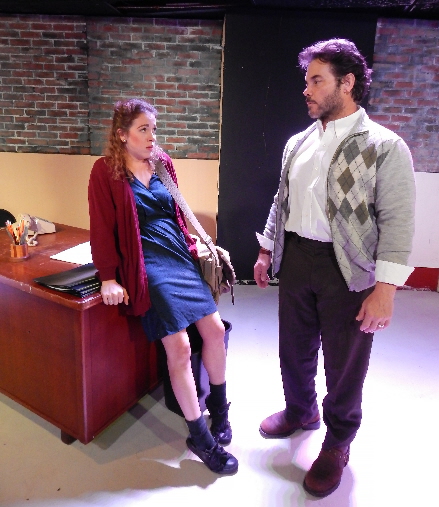 A quarter-century on, the temptation is to reassess and reinterpret Oleanna, David Mamet’s incendiary screed about mutually toxic but asexual relations between men and women.

Oleanna, arguably Mamet’s most divisive work, certainly generates numerous other interpretations as each viewer sees it through the lens of their own vision of the world — meaning they may have different assessments, likely different than what you just read above. But no matter how varied their reaction, each person is likely to ride home with their audience mates and burst out, “See? Do you finally see? That’s what I’ve been talking about!”

This edition by the adventurous Boca Raton troupe wrestles Mamet’s fiendishly difficult and problem-laden script to a commendable victory. Yes, nuanced layers are achingly missing that would make this less of a straight-ahead charge over the thematic cliff. But director Rosalie Grant and actors Todd Bruno and Sara Elizabeth Grant conquer with honors the Herculean task of dissecting and landing Mamet’s complex intellectual pyrotechnics with an almost naturalistic comfort.

This 1992 play that fueled the charge that contrarian Mamet was a misogynist posits a devoted college professor John on the cusp of obtaining tenure and who is counseling a student Carol lost in his coursework and headed for a failing grade. Their ensuing meetings are a study of shifting power struggles.

Over three scenes, (a) John’s altruistic but paternalistic personality becomes increasingly grating and Carol rejects his self-absorbed pontificating, only pleading him not to give her a failing grade. Then (b) the next day, a suddenly indignant Carol has reported to college officials John’s genuinely innocuous words and actions as sexual harassment. This endangers both his tenure and his impending purchase of a house. (c) A few days later, Carol becomes even more strident and self-righteous as part of a “group” who feel degraded by the male academic establishment’s standard attitudes enshrined in their teaching. John’s professional future has been doomed by the tenure committee’s endorsement of Carol’s charges. But the worst for both is yet to come.

Evening Star’s greatest source of pride should be how Grant, Bruno and Grant have mastered the sadistically difficult Mametspeak — smoothly integrating his half-phrases and broken field running dialogue into recognizable speech patterns, yet ensuring that the audience knows the intent of every line. Only other actors know how remarkable that achievement is. In fact, some Mamet purists might carp that the playwright’s uniquely halting dialogue is meant to have the stilted artificial cadence that his favorite actors have embraced rather than resisted. But director Grant’s choice makes the content of the philosophical arguments easier for the audience to grapple with.

Bruno bravely depicts a well-intentioned self-made intellectual who is naively unaware that his pedantic pontificating can seem a pompous endorsement of a calcified compromised establishment. Bruno puts across that John finds his self-worth in teaching even though he sees himself as a rebel issuing mildly anti-establishment pronouncements. They are really rationalizations to make him believe he is not part of the stultified social mechanism. Trying to build an arc, Bruno starts off a bit more restrained and tamped down than an audience might hope in the opening minutes, but he and the director ramp that up scene by scene. You can’t doubt Bruno’s creation of a person descending from comfort to misery.

It can be argued that Bruno is at least five years too young for the role. John is listed in the script as being in his 40s. The role takes on a bit more anxiety when John is a tweedy almost-past-his prime person whose years invested in this career progression raise the stakes on stage.

Sara Grant, who was so good in Evening Star’s The Last Five Years, is utterly convincing as Carol in all three scenes, whether it’s the hapless student adrift in a morass of unintelligible academic verbiage, or the second act persona finding her self-respect and pushing back with accusations of teachers using their institutional position of power to buttress their self-worth, and even the third act’s caustic unforgiving firebrand whose internal logic is inexorable, but who takes her self-justifying rationalized arguments to nearly insane extremes. She does each one beautifully, laced with fine individual quirks. The problem is that none of these women seem to be the same woman. Whether that’s Grant or Mamet, you can see no shred of any of them in the others to make the argument that she is evolving (over a matter of, say, 96 hours). The finest Mamet interpreters in the past have subtly but clearly laid seeds in each scene’s performance that make those persona changes credible.

Rosalie Grant has carefully calibrated the production with an eye for details, down to having Bruno/John wear a wedding ring. Her staging visually makes her points as well. In the first act, she has John roam his office with Carol seated most of the time, reminiscent of a wagon train circled by Indians in a B movie. In the third scene, positions are reversed as the shattered John is seated at his desk being circled by the raving Carol.

The evening has a few weak spots. The first is Mamet’s script, beyond its paranoiac descent into implausibility. Carol starts off as a hapless, lost soul nodding acquiescence and ends up a fiery heartless revolutionary. She begins as someone who cannot understand John’s 50-cent vocabulary or follow his philosophizing. In less than a week of narrative time, she is a heedless zealot battering him with graduate school verbiage and sociological manifestos.

The aforementioned nuanced performance layers from other productions that seem missing here were characterization seeds strewn through early scenes that made the succeeding developments credible. Neither person is quite what we initially perceive them. Because of these clues in off-beat ambiguous line readings, these personality developments didn’t seem as jarring when the other layers emerge.

In most Oleanna productions, it’s difficult to label who is the protagonist and who is the antagonist, sparking considerable post-show debate as to who has the superseding right on their side. The viewer’s decision often serves a social litmus test.

But not here at Evening Star. In the eyes of this white male boomer critic, John is flawed, a bit blinded with self-focused but altruistic and decent. Carol perverts everything he says and does. It’s not clear (which is justifiable) whether she actually believes these outlandish extrapolations, but she ascribes darkness to John’s soul where clearly there is, at the worst, ignorance.

You might disagree. Let’s meet in the bar and talk about it.