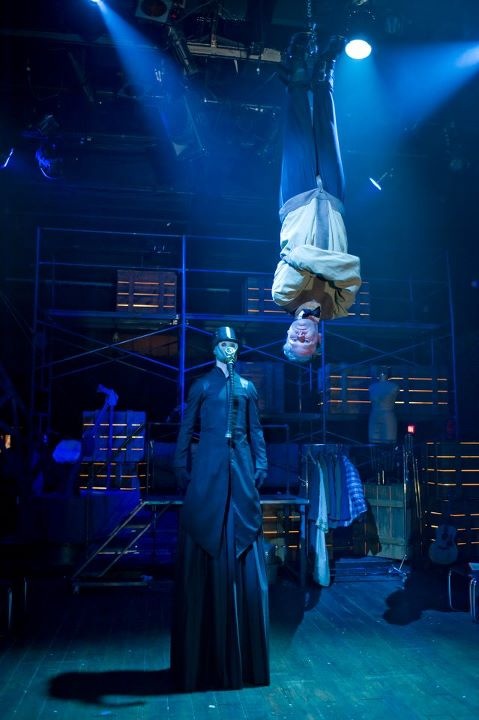 The melding of narrative metaphors and stage magic are emblematic of the spectacle infused in the play Death and Harry Houdini, another imagistic work from the House Theatre of Chicago and the Arsht. Last year, Arsht vice president Scott Shiller brought the House production of The Sparrow to Miami, notable for its highly stylized brew of acting, video, music, singing, lighting, sound and imaginative staging.

This play is similarly a sensory experience examining how legendary magician Harry Houdini was obsessed with conquering death, evolving his focus from humble card tricks to massive illusions that directly challenged mortality.

The work was written and is directed by House founder Nathan Allen, but the magic has been woven in as an integral part of the piece by Watkins, who has established a career as a professional magician as well as stage actor.

Allen added, “When I first started working on that script ten years ago, I was really trying to experiment with what we wanted our company to do on stage and to look like on stage. Now we know more about stronger storytelling choices, how does story structure work. And when we were 22, we didn’t have a lot of experience. But since then we have gone to a few funerals and had a few hits.”

So when the company was considering a show to honor its 10th anniversary, it decided to revisit its first production.

The production is part of the Arsht’s Theater Up Close initiative, a program that co-sponsors and hosts theatrical efforts such as the work of local companies, Zoetic Stage and Mad Cat Theatre Company. Unlike The Sparrow, which the Arsht simply paid for and transplanted, this production of Death and Harry Houdini had direct upfront involvement of Arsht Executive Vice President Scott Shiller, who has been a House champion since living in Chicago.

“We see this as an extension of our mission to support great artists,” Shiller said Tuesday. But his hope is for a much closer partnership in the future with the House Theatre including commissioning a new work that would be mounted in Miami with local actors, who perhaps would return with the show to a Chicago engagement.  He seeks cross-pollination among actors, directors, playwrights and designers from both cities working alongside each other. That can only elevate the local arts scene another notch by exposing both groups to each other’s aesthetic, he said.

“I really think what Scott is doing here is bold. The relationship that the Arsht has curated here with my company, these things are rare,” Allen said. Besides “bringing a longer lifespan to our work, it brings it to a totally different audience. It creates a healthier ecology for the work and it makes the art better.”