Experience Death and Harry Houdini At Arsht Center Before It Disappears 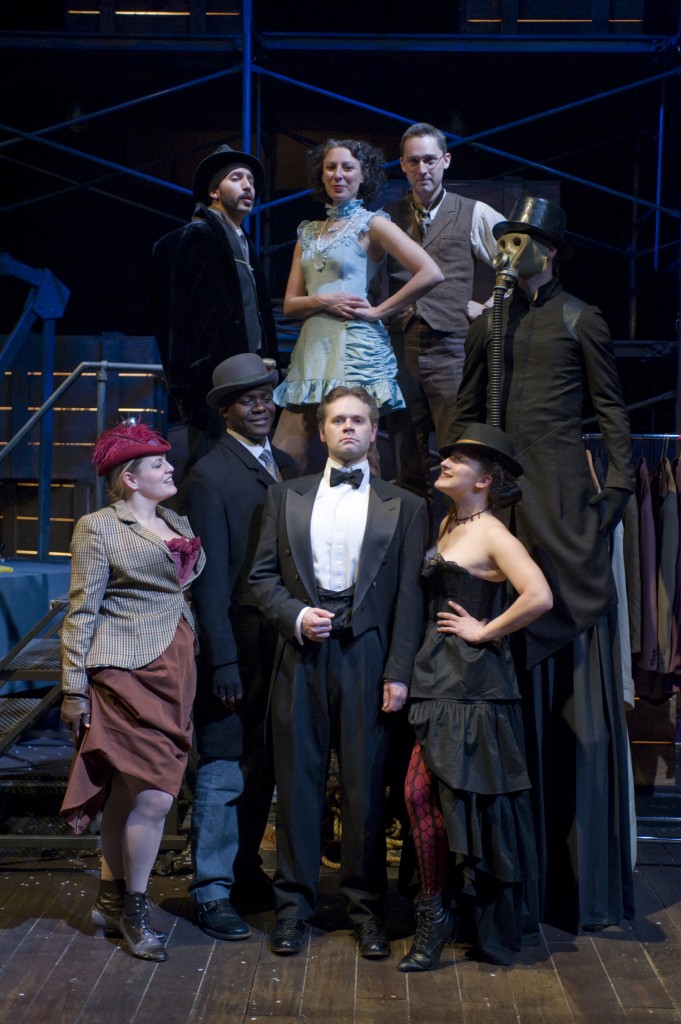 When the lights go up, it’s welcome to the big top: “Ladies and Gentleman, Boys and Girls” (although this isn’t a show for the kiddies) as The Ringmaster (a perfectly sinister Johnny Arena)  introduces us to the world of Houdini. In playwright Nathan Allen’s original script, death becomes an obsession for Houdini (born Erik Weisz) as we see the pain in the young man’s face as his father suffers, then dies from cancer. Allen’s treatment of the death is pure sideshow, too. Ensemble actor Abu Ansari plays the father whose deathbed is actually a magician’s box. Ansari’s head, arms, feet and hands are exposed, and, then a dreamlike scene is played out. As he takes his last breath, Ansari is sawed in half in the box. How’d they do that? Is it appropriate to clap? Oh, but that magic was so good. Applause.

Death appears as an imposing figure that frequents the play throughout. Covered in a gas mask, actor Kevin Stangler, draped from head to toe in black, is not recognizable. He’s on stilts and, Darth Vader-like comes out of a back curtain through a midst of fog.

Watkins plays Houdini with a boyish charm, yet bringing out an eccentric side that borders on insanity. Watkins has a thousand tricks up his sleeve, appearing to audiences first hung upside in a straightjacket, and wiggling his way out of it in seconds flat. The sideshow continues as Allen’s script takes Houdini to study with Dr. Lynn, a Chinese sage who has his own bag of tricks. The staging puts Shawn Pfautsch as Lynn (his face completely covered by an oversized traditional straw hat), at one end of the stage on scaffolding, where he performs wonderfully engaging magic tricks while the wide-eyed Houdini watches. “I can learn. I can learn fast,” Houdini tells the old man.

But his mentor’s death sets Houdini over the edge (literally) and he begins performing death-defying feats such as jumping off a bridge with his hands and feet shackled. This is played out before the talented ensemble (Ansari, Arena, and the riotous stand out Trista Smith) who come through at every turn, including frequent stints as a marching band.

There’s plenty of magic throughout performed not only by Watkins, but the other players in the ensemble, and it is methodically placed and perfectly timed to give the audience time to breathe from being consumed by elements of Houdini’s story — such as his marriage to Bess, a dancer who gives up her dreams to devote her life to her husband’s career. Bess is played by the marvelously energetic and talented Carolyn Defrin, who appears as if this role was tailor-made for her. The story takes us through the couple’s dealing with Houdini’s aging mother (an absolutely flawless Marika Mashburn, who only speaks German throughout the play), and delves a bit into the psyche of his younger brother, Theo (Pfautsch as the perfect yin to Watkins’ yang), who has also devoted his life to Houdini’s dreams.

This scene, as you can imagine takes mental and physical preparation, as Watkins is lowered head first into the narrow tank. On opening night, an audience member’s cell phone interrupted the prep, but never missing a beat, the actor took a few deep breaths, and sternly reprimanded the phone’s owner. When it went off again, it was quickly confiscated by a member of the House Theater’s stage team. The water torture scene continued without a hitch.

To read a feature and interviews about the show, click here.

This entry was posted in Performances, Reviews and tagged Adrienne Arsht Center, Death and Harry Houdini, House Theatre of Chicago. Bookmark the permalink.