Doubt Is The Point At The Maltz

Posted on February 6, 2013 by Bill Hirschman 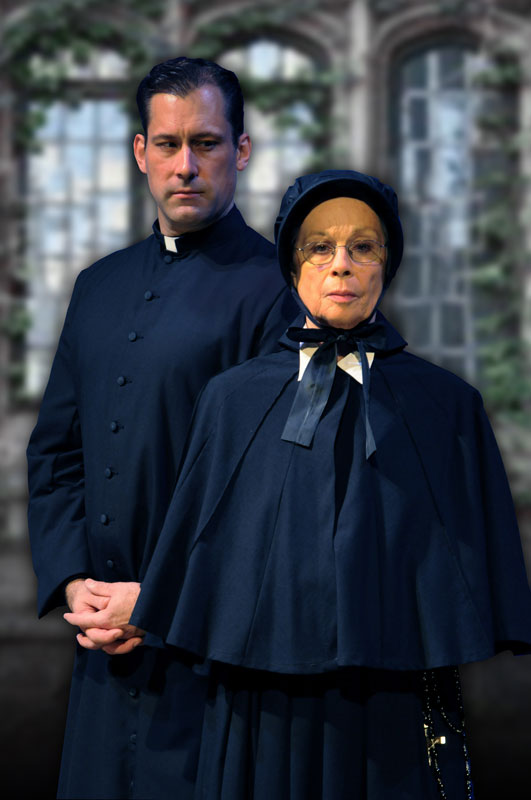 Jim Ballard and Maureen Anderman are the warring clergy in Maltz Jupiter Theatre’s production of Doubt: A Parable in previews Wednesday and opening Thursday.

Each of the four cast members and the director of Maltz Jupiter Theatre’s production of Doubt: A Parable were asked just those three words. Each knew exactly what the question meant and each had an answer – in fact, the same answer.

On the surface, the driving question in John Patrick Shanley’s 2004 play about coping with uncertainty in the modern world is whether charismatic and empathetic priest Father Flynn has sexually abused an altar boy in a Bronx parochial school supervised by a no-nonsense martinet, Sister Aloysius. Significantly less powerful in the patriarchal strictures of Catholicism in the mid-1960s, she obsessively pursues the possible violation with the reluctant aid of young Sister James who reveres Flynn and dislikes Aloysius.

Audiences members will leave the theater arguing whether Flynn did or didn’t, and some will be unable to make up their minds — which is the theme of the play and the reason for the title. Doubt is the point.

So it doesn’t matter what each cast member and the director J. Barry Lewis think happened, and they don’t talk about it in rehearsals. But everyone in the show must know what they think happened.

“I think with it being so totally ambiguous, I don’t think you can give guidance as a director” unless you know, Lewis said early in the rehearsal process.  “I don’t need to know what the actors think happened and especially not what Jim Ballard, who’s playing Father Flynn, thinks. But I do insist that they have to make a choice; you can’t be ambivalent about it to actually play the character or the role.”

In the original New York production, Shanley never told the cast what he thought happened and neither did the original Father Flynn, Brian O’Byrne. Supposedly, Shanley, who directed the 2008 film version, did discuss it with his cinematic Father Flynn, Phillip Seymour Hoffman, but no one knows what they decided. Ballard said last month that he had made a choice, “but it might change.”

“It goes this way and then that way and then this way, and that’s what’s so exciting about it. Your convictions are challenged and they shift radically within an hour and a half,” she said.

Lewis, normally the resident director at Palm Beach Dramaworks down the road, added, “The moment you think, ‘Ah that’s what Doubt is about, that this is the truth,’ that’s the moment you begin to doubt. It’s like perfection in theater. We always strive for perfection, but you never achieve it because the moment you’ve achieve it, you’ve failed.”

Karen Stephens, who plays the mother of the boy, said, “There’s a story being told, some questions being asked. And it’s really up to the audience to determine what the answers to those questions are.”

Lewis sees the story in part as a mystery play, almost in the medieval sense. “Here is one of the great mysteries of the world: what doubt is to faith and simply whether one can exist without the other. Religion has always been divided on this because many people say that the minute you begin to doubt is the moment you begin to lose your faith, and other people say that you can only have faith and you can only really solidify your faith when you do doubt. “

To deliver the message, he has assembled an all-local cast, a Maltz rarity. Anderman is a Tony-nominated actress with decades of experience including premieres of plays by Edward Albee. But she and actor husband Frank Converse have lived part of the year in a West Palm Beach condo for about eight years and have been visiting her mother here for even longer. Ballard worked with Julie Kleiner who plays Sister James in several shows including as a Victorian man and wife in GableStage’s In the Next Room, or The Vibrator Play. Stephens’ credits include depicting a raft of disparate characters in the one-woman show Bridge and Tunnel.

Casting Anderman was a coup since a week before rehearsals for Doubt, she was completing a five-week run at Dramaworks’ acclaimed production of Albee’s A Delicate Balance.

“I had to think about it because it was daunting doing these back to back,” said Anderman, 66. “But when we were at the Guthrie or Stratford or the Old Globe (regional theaters in her youth), you would do two or three roles a season. So this is my Florida theater season.”

When Lewis proposed it last year, Anderman kicked it around with Sally Ann Howes, another veteran actress who lives near her in West Palm Beach, “I said I’m worried because I like to come into a play really prepared, and I said there’s only a week between. I don’t know if I will have time. In the old days, I could do that but now I don’t work that way.” Howes encouraged her. “She said, well, how many days off does an actress need? We get lots of days off.’

“Also, I didn’t want to seem like an outsider coming in taking somebody’s job…. But I felt like I have been coming down here enough. We pay taxes here,” she said with a throaty laugh. “I can do a great role and live in my own home and not live in actor’s housing.”

Still the prospect of two major roles in a row was scary. Anderman finished a run at the Westport Country Playhouse last summer in Joan Didion’s one-woman memoir about coping with death, The Year of Magical Thinking. She immediately dove into studying the roles in July and August. “I was trying to get it into my head this woman (in Doubt) and what she goes through and try to learn it. I’m still struggling to learn it.”

The play is multi-layered and the roles are complex. Stephens’ mother, for instance, must make a crucial choice on behalf of her son that has always stirred controversy among audience members.

“There are two sides to every story,” Stephens said. The key with all the subtext and ambiguities is “the process of filling in the blanks and making the character believable in the choices that she makes. It’s a great challenge for an actor to have. It’s like eating a good piece of steak. “

With its small cast, simple set, thoughtful themes and dramatic clashes, the play is catnip to both actors and producers. Stephens had wanted to audition for the part when the play was staged at the Caldwell Theatre shortly after opening its new building in 2007, but she was out of town. Kleiner auditioned for the role of the young impressionable nun while she was pregnant.  Andrews Living Arts, a small company in Fort Lauderdale, currently is running the play this month with Lory Reyes as Sister Aloysius.

While the Maltz has staged straight plays before, its audience has come to expect lushly-produced mainstream musicals. This year, Producing Artistic Director Andrew Kato has mixed it up with Amadeus last fall and now Doubt.

Ballard said his advice to audiences is to “come with open mind” and know that “they will have to think.”