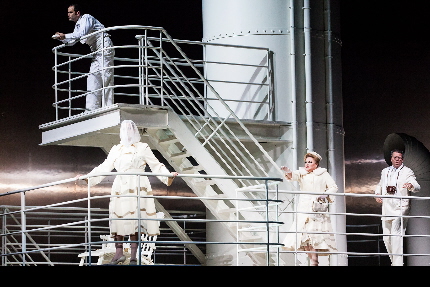 The Passenger, composer Mieczyslaw Weinberg’s operatic treatment of the Holocaust and its aftermath, will be a heavy enterprise, in a number of ways, when it makes its area debut April 2-9 through the Florida Grand Opera at the Adrienne Arsht Center for the Performing Arts of Miami-Dade County.

The two-tiered stage, with the bridge of an ocean liner on top and Auschwitz barracks below, weighs over 12 tons. “Ginormous,” as Susan T. Danis, the opera company’s general director and CEO puts it. And the orchestra has been augmented to more than 70 players, extra-strong on the strings and brass.

The opera’s narrative is based on the experiences of Auschwitz survivor Zofia Posmysz, who turned that time into a radio play and then, under the direction of Andrzej Munk, a television play and a movie. Composer Weinberg used the play as the basis for the opera in 1968. He did not live to see its first performance in 2010.

The Passenger opens as former Auschwitz overseer Liese, on board a luxury liner for Brazil, believes she sees a former death-camp prisoner in the crowd. The journey into the past begins.

“We had to create a sense of Auschwitz without being too explicit,” said associate director Rob Kearley. “The piece is very well constructed, so it was a matter of not adding too much. There are occasions where the music is extremely violent. There are a couple of savage beatings, which we need to experience because we need the shock value. But elsewhere it’s a case of letting the music, and the emotional journey of the characters, tell their own story.”

There are periods when the music is “transparent and still,” said conductor Steven Mercurio. “Then, when all hell breaks loose, it really hits the fan. It’s clear that it was composed by somebody experienced writing music for film. The music becomes a beautiful underscoring of the dramatic action. You’re invested in the people, and the music isn’t ‘Watch me! Watch me!’ like much operatic music. The music seconds the drama, so it’s like you’re watching a film that’s also an opera.”

Opera can, like film, “be genre-ized,” Mercurio said. “There are romantic films, but there’s also Schindler’s List, a masterpiece in what it does. So is The Passenger. Think of it as the Schindler’s List of opera. Or The Pianist.”

Danis said that when she came to Florida Grand Opera nearly four years ago, she was “given a mandate. The board didn’t want to see the ABCs of opera all the time. Every year I try to do an opera that might not be as lighthearted as La Boheme but does offer exposure to something new.

“We take a financial risk when we take on any opera,” Danis said. “If I try to play it safe by repeating the tried-and-true, that will tire people out too. So getting new works in the repertory – like The Passenger– is the way we’re going to achieve the breadth and depth.”