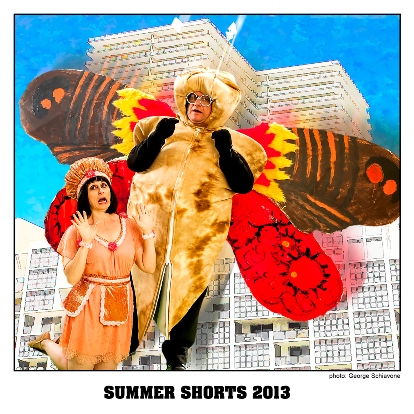 Irene Adjan is terrorized by  Ken Clement as an out-of-work Mothra, part of the insanity at City Theatre’s Summer Shorts / Photo by George Schiavone

It’s tough enough for an actor to play a single role like Hamlet over the course of a couple of hours, but once they find the character’s groove, a talented thespian can ride it for the entire evening.

But imagine you’re Ken Clement appearing in City Theatre’s Summer Shorts opening this week at the Arsht Center in Miami. One minute he has to convince the audience he’s a dolphin, a few minutes later he has to inhabit Dracula and still later he has to find his inner Mothra.

“Mothra is like Willy Loman. He’s been out of work. He’s trying to get a job,” Clement said during a break in grueling tech rehearsal Tuesday.

He can joke, but performing in the annual festival of short plays, a rite of summer now in its 18th edition, requires talents they don’t dwell on in drama school. “You have to commit to your character, but you only have to commit for ten minutes,” said Clement who has held the stage nearly alone for an entire evening in Jacob Marley’s Christmas Carol and Diary of a Madman.

The other edge of the sword is an actor only has seconds to get the audience to understand who the characters are, where they are and what the situation is, said Clement who has only one previous Shorts appearance because his skill set overlaps with that of Shorts regular Steve Trovillion, missing this year.

There’s no respite even when an actor doesn’t have a role in every sketch, said Irene Adjan, now on her fourth tour of duty. Between skits “you’re generally changing your entire costume, your shoes and wigs; so you’re running the entire time.”

That’s if you’re lucky. If you have back-to-back scenes, “you’re casually walking upstage (until the blackout) and then tearing off your wig and your shoes, changing. You’re finishing that last button as the lights come up.”

This year, the repertory troupe will flow in and out of 12 mostly wacky comedies that include world premieres by local writers like Susan Westfall and regional bows for works by nationally known playwrights such as Paul Rudnick.

For the actors with the most roles, the trick is making each one seem completely different, said returning player Todd Allen Durkin. But in a perverse way, the actors don’t want the audience to marvel at and therefore be distracted by their versatility during the performance, Adjan said.

Indeed, finding the truth of every character is as essential as in high drama, said newbie Vera Varmalov, whether it’s the young girl she portrays in one serious playlet or one of the outrageous Real Housewives of Orange County. “You can’t portray a person as a caricature, Varamlov said. “You have to be both real organic and also bring truth to someone who is completely over the top.”

Some actors don’t even think about the challenge of switching gears; it’s just one uninterrupted marathon, Durkin said, “The more you run it back to back, the easier it is to get into the next character. It’s all part of the same play. There’s a throughline.”

The key to success is the brief 2 ½-week rehearsal period. Actors must quickly determine the techniques and traits to communicate their characters, and then stick to those choices until the repetition makes them “a muscle memory” that requires little introspective preparation during the actual performance, said Shorts actor-turned-director Antonio Amadeo.

Varmalov, a recent Miami transplant seduced by the area while performing in Mosaic Theatre’s final show, The Birds, wonders if audiences realize how much work goes into the silliness of this production or any play for that matter. “It’s not an accident. It took three weeks of hard, meticulous work to get that one moment” they see.

Other cast members this year include Rayner G. Garranchan (Sonny in Actors Playhouse’s In The Heights) and the farewell appearance of Renata Eastlick (Slow Burn’s Kiss of the Spiderwoman, In The Heights and GableStage’s Ruined) who is leaving to make her mark in New York City.

This year’s Summer Shorts  is only a third of the programming from City Theatre, operating again this year out of the Arsht Center for the Performing Arts in Miami. The company is joining with Orlando Repertory Theatre to produce a musical for children and adults, The Amazing Adventures Of Dr. Wonderful (And Her Dog). The show was first mounted last year at the Kennedy Center in Washington, D.C., with book and lyrics by Lauren Gunderson (Exit, Pursued By A Bear) and music by Brian Lowdermilk.

Finally, City Theatre will host is third annual CityWrights week of professional development for playwrights June 19-23 at the EPIC Hotel in Miami. Programs include workshops for writing, reading and feedback with master playwrights such as Tina Howe, Lauren Gunderson, Steve Yockey, Robert Caisley and Matt Hoverman. Howe has already prepared a homework assignment to be brought to “class” and read by the CityWrights Acting Ensemble.

Information and registration can be found at www.citytheatre.com and (305) 755-9401. Special rates are also offered for conference attendees at the Epic Hotel and the Courtyard by Marriott Downtown.

Dr. Wonderful plays June 15-30 at the Arsht, Tuesday-Friday (see website for exact schedule) and 1 p.m. Saturday-Sunday. Camp performances are scheduled throughout the week