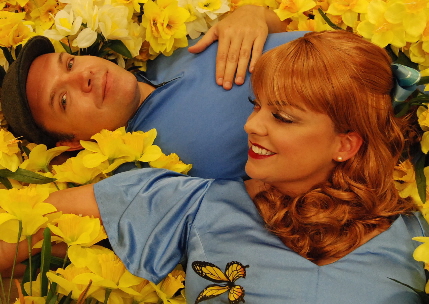 The pitch line for the Broadway musical Big Fish is “Dream Bigger.” It’s fitting, too, for a production that marks a turning point for the relatively young Slow Burn Theatre Company. After five years of staging its shows in a high school auditorium in West Boca, the professional theater company moves to the Broward Center for the Performing Arts.

Slow Burn had been slowly inching its way out of the Palm Beach County high school, extending the run of its shows to play at the Aventura Arts & Culture Center, which began in 2013 with its production of next to normal. Its partnership with the Broward Center began last fall with the company creating smaller shows for the center’s Abdo New River Room – The Marvelous Wonderettes, an off-Broadway lollipop musical about a late 1950s girl group, and the one-act musical comedy The 25th Annual Putnam County Spelling Bee.

Matthew Korinko, Slow Burn’s co-founder and executive director, said the company had been in talks to make a move to the Broward Center for “a couple of years, but we weren’t quite ready for the prom.” Then, he said, things lined up. “We looked at some numbers and said to ourselves, ‘OK, what will it take to do this?’ ”

What it took was a confidence that was steadily built by audiences and critics (plus two Carbonell Awards last year in its sophomore year of eligibility), interest from actors and the aforementioned outside producing partners, to convince Korinko and co-founder and artistic director Patrick Fitzwater that they were ready.

“It was always a hard sell to get audiences to come and see a professional theater company in a high school. We’d have to reel them in, but once they saw the product, people would say, ‘Oh, my gosh, I can’t believe you guys are here.’ And we would retain almost everyone that came to a show,” said Korinko.

With the partnership at the Broward Center, Korinko said the venue’s reputation offers “instant credibility and more visibility” and, he believes, it will help with sponsorships. “We can tell businesses that now their logo is going to be seen by X amount of people as opposed to, well, three weekends during the run of the show, we’re going to have some people over at the high school.”

No doubt about it – Slow Burn has found a niche by taking on challenging, contemporary musicals, and then delivering them with a singular flair and an assured conviction, which has helped them stand out in the South Florida theater scene. It’s been a bit of a meteoric rise as Slow Burn has amassed a following since Korinko and Fitzwater arrived from St. Louis and started the company in August of 2009.

They produced their first show, Bat Boy: The Musical, on Feb. 18, 2010 in the West Boca Community High School auditorium. Their portfolio of non-typical contemporary Broadway shows, such as Carrie: The Musical, Urinetown, Frank Wildhorn’s Bonnie & Clyde, Parade, Rent, among others, appeals to a wide demographic − most notably, too, a younger theatergoer.

And the move to Broward Center’s Amaturo Theater should attract even more diversity as it puts the company in a centralized location. Korinko said he’s sure there will be an audience that will come to see Slow Burn’s shows that didn’t know about the company previously, including theatergoers from “a little more south – Miami, south Broward County − because of our location.”

The company’s choice of Big Fish had been decided long before Korinko and Fitzwater had signed on the bottom line with the Broward Center. Staging the show at The Broward Center has made the production an even “bigger fish,” said Fitzwater. “(The venue) will make the show more accessible to audiences.”

Based on the 1998 novel by Daniel Wallace and the 2003 film by Tim Burton, Andrew Lippa (music and lyrics; Lippa also wrote The Addams Family) and John August’s (book) musical closed three months after opening on Broadway in 2013. By the time its final curtain fell it had played 34 previews and 98 regular performances.

The story is about Edward Bloom (Shane Tanner will play the role in the Slow Burn production), who tells extravagant tales to his son and how these stories are received by his son. “It’s a wonderful father and son story,” said Fitzwater, who commented that he was lucky enough to see Big Fish on Broadway merely by chance.

“A colleague of mine, actress Kate Baldwin, who I knew back when we were young performers, had the lead. I was in New York and me not knowing very much about the show, I was just going to go see it to be supportive and to see a friend in the show,” said Fitzwater adding that he was “absolutely spellbound by the story it told.”

Korinko recalled that when his co-producing partner returned home, there was no doubt the show would become part of Slow Burn’s repertoire.

That was a year and a half ago. “It’s great American storytelling backed by a great American musical and those have a hard time getting written,” said Fitzwater. “For so long we were in a period where everything came from across the pond – London musicals like Matilda, Phantom of the Opera, Les Miz.”

Known in its past six seasons for never shying away from a musical challenge, Big Fish could be Slow Burn’s biggest yet: 500 to 600 costumes (Fifty percent are handmade – not one is being rented or shipped from a costume shop, all are designed and made by Slow Burn). 65 wigs. 18 cast members (“Our biggest cast to date,” according to Fitzwater). The sets were created in Slow Burn’s Space, the small warehouse in Oakland Park that the company opened last June for construction and rehearsals.

“There are giants that walk on stilts, there are mermaids, there are USO girls, there’s a Western showdown. You name it, there’s every style of choreography in this show,” said Fitzwater, who is directing and choreographing Big Fish.

While the musical is certainly big – “eight huge production numbers,” according to Fitzwater, there’s something Slow Burn will do differently. While Broadway behemoth Susan Stroman directed and choreographed the Broadway version of Big Fish, Fitzwater said that their production will be slightly scaled back. “One of the challenges the Broadway version had was that it was overproduced and it got in the way of the story telling, so we brought that up a bit.”

Korinko added: “In a show about imagination, we wanted to leave a little to the audience’s imagination.”

In fact, the Broadway composers Lippa and August created their own intimate rendering of Big Fish entitled the 12 Chairs Version, which is for a smaller cast and where less is intended to be more.

Slow Burn will stick with the big Broadway production, but maintain, what the producers said is a better balance between storytelling and a wow factor. “We wanted our Big Fish to have enough ‘pow’ to be a fantastic Broadway musical, but at the same time not dilute the message of the story. We’ve left a little bit for the mind to wander, for the audience to create its own story,” said Fitzwater.

He does promise however a big Stroman-influenced tap number. “She never tackles a show unless there’s a tap number in it. So audiences will see a wonderful Stroman-style tap number. It’s our choreography, but it has the flavors of the way she likes to pack on the production. We kept the number true to that.”

Slow Burn Theatre Company presents Big Fish at the Amaturo Theater, Broward Center For The Performing Arts, 201 SW 5th Ave., Fort Lauderdale, Oct. 22-Nov. 8. Performances are Thursday through Saturday at 7:30 p.m., and Sunday at 2 p.m. Tickets are $45. Call (954) 462-0222 for tickets, at www.browardcenter.org or #Ticketmaster.com; in person at Ticketmaster outlets or the Broward Center’s Auto Nation Box Office. Info at www.slowburntheatre.org