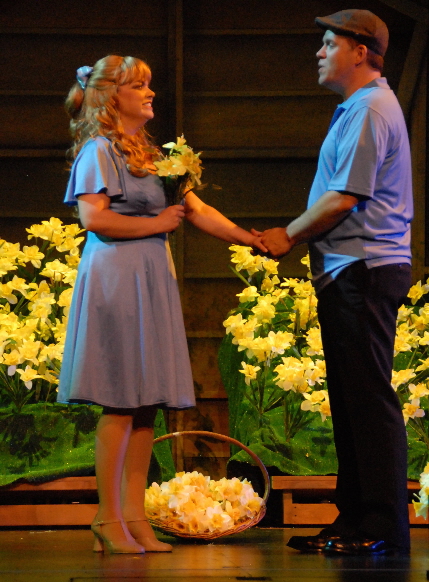 This is what we in the erudite and rarefied profession of theatrical criticism refer to as a goddam rave review.

With this production of Big Fish, Slow Burn Theatre Company has proven itself with no asterisks to be the equal of any company producing musicals in the region, some with far more resources, government grants and well-heeled donors — not to mention among the most adventurous in tackling what few others attempt.

Big Fish is a buoyant paean to imagination and storytelling alongside a deeply affecting universal tale of disaffected parents and children trying to come to peace with each other in the shadow of mortality.

This benchmark production for a company that has outgrown the term fledgling is suffused with a joy that reflects both the material and a celebration of Slow Burn’s arrival as the resident theater company at the Broward Center for the Performing Arts.

Barely five years old, Slow Burn has operated in the West Boca Community High School auditorium since its creation in 2009 by St. Louis emigres Patrick Fitzwater and Matthew Korinko. It produced two small musicals last season in the Broward Center’s smaller Abdo River Room, The Marvelous Wonderettes and The 25th Annual Putnam County Spelling Bee. But this is a validating graduation day for Slow Burn and a step further in the Broward Center’s commitment to become a co-producing house rather than just a host for visiting productions.

The collaboration does not technically increase Slow Burn’s operating budget very much and you can still see their fiscally conservative approach in all they do. It does provide administrative infrastructure and puts director/choreographer Fitzwater on salary so he can quit his day job as a hair stylist.

But here’s the thing: The deal gives them for the first time physical resources worthy of their talents, notably sound and lighting equipment that easily eclipses what the school so generously gave them. And they take complete advantage of it. It’s like watching a young musician, who has been developing a skill set for years with beginner’s equipment, finally given a fine musical instrument, which reveals the extent of their talent. As a fellow critic wrote of a different theater company last season, it’s the sense of a promise fulfilled.

Even so, every aspect of the production, even those that have nothing to do with hardware or money, shows a noticeable ratcheting up of quality in every department even though virtually everyone connected to the show has worked with Slow Burn before. Everything is sharper, stronger, more confident, more polished. Clearly, everyone felt a self-imposed challenge to step up their game.

The 2013 musical with score and lyrics by Andrew Lippa (The Wild Party and The Addams Family) and a script by John August is based on Daniel Wallace’s 1998 novel and Tim Burton’s 2003 film. It differs a bit from the film, especially with the same actor playing the lead part that was seen in the film as an older man by Albert Finney and a younger man by Ewan MacGregor. The Broadway run received mixed reviews, but audiences generally adored it. Still, word of mouth did not stick and the production closed after about 100 performances.

The plot tells of Edward Bloom (Shane Tanner), an affable salesman from small town Alabama who spends too much time on the road, but tries to make it up by spinning tales of his past to his young son, Will. He says the tales are true but they involve heroic adventures that cross paths with a witch who gives him a glimpse of his death, a mermaid who teaches him about love, a gentle giant, a secret werewolf, all depicted on stage with full-out gusto. Despite the support of his loving wife Sandra (Ann Marie Olson), Edward can never win over his son made prematurely cynical by the long absences of his dad. Will suspects that Edward succumbed to the unfulfilled desire for a special life by inventing adventures, which change with each retelling.

Flash forward. Will (Justen Fox-Hall) is getting married to Josephine (Anjane Girwarr) and a few scenes later about to welcome the birth of a son. But he discovers that his father is dying of cancer and he has a last chance to discover who his father really is under the tall tales and to make peace with him – two tasks that seem highly unlikely.

Gentle laughs pervade the work and the Broadway-style entertainment vibe is ever-present. But the musical quietly works its way inside the ribcage where the heart beats because it plugs into universal themes including a childlike love of fanciful storytelling, and a more adult and incisive call for understanding among parents and children. By the last scenes, much of the audience is dabbing a Kleenex at their eyes and some are audibly bawling. The two strings don’t quite mesh, but they come very close. Almost subconsciously, it also resonates with the idea that human beings invent themselves, and the sense that you can create who you are, if not who you necessarily want to be.

Fitzwater’s deft direction and choreography infuse the show with energy and commitment to the beauty and whimsy of the work. The show is rife with large production spectaculars of dancing creatures and small poignant numbers that give credibility to its stubbornly optimistic and upbeat attitude.

Lippa’s music is by turns jaunty, peppy, romantic, soulful. His lyrics are clean and deceptively simply, although between the parade of homilies he slips in insightful observations. August’s book, based in part on his screenplay, is workmanlike but like many musicals, it has to sketch in the plot in broader strokes than would be optimal.

Fitzwater and Korinko often chose shows that speak to them and their audiences, but shows that were not raging successes on New York such as Side Show and Carrie. Those scripts and scores may have flaws, but they believe the overall work is worth the revival. So it is with Big Fish. Sweetness and whimsy is terribly difficult to make land on stage in the 21st Century, and while everyone almost physically yearns to create a level of transcendent magic, something about the piece keeps that goal just a few feet out of reach.

The 18-member cast is composed of Slow Burn veterans and a few newcomers, and the casting itself is absolutely perfect, a key to the show’s success.

Start with Shane Tanner. Back in April when he stole The Wick Theatre production of the show Oklahoma as Jud, we wrote, “…he’s rarely been given the extended parts he earned long ago. His work here made us yearn to see him in a musical theater lead worthy of his talents.”

Boy, did we ever call that one. And does he ever deliver. Like most roles in the show, Edward Bloom is a two-dimensional character who sings a lot of stitched sampler aphorisms. So it is an unreserved tribute to the superb acting and singing abilities of Tanner with Fitzwater’s direction that give Edward depth.

Tanner’s creation of a pure-hearted dreamer is so winning that the audience is charmed into going along for the ride even as you scoff at the tall tales. Tanner’s Edward so completely believes the fantasies that he spins that you stop caring whether they’re true or not.

Physically, Tanner is a strapping, handsome man who looks like the Army vet he actually is, but there’s something about the shining eyes and shy grin that communicate the openheartedness, wide-eyed enthusiasm and vulnerability that Edward must have. He convincingly plays Edward as a young man full of life and as the prickly older introspective man facing mortality and unresolved issues with his son.

Finally, there is that baritone, a flawless full-bodied musical theater sound that sells the score with unreserved passion whether it’s an upbeat exhortation to “Be The Hero” or the lovely “Daffodils.”

And slowly, far too slowly, the theater world here has been noticing the talent and skill of Olson. She was so wonderful as the embattled wife in Slow Burn’s Parade and the powerhouse country singer in Thinking Cap’s Always…Patsy Cline; later this season she will be Mama Rose in Gypsy at Broward Stage Door. But it is impossible to deny her ascendancy any longer.

Her glorious voice is like liquid sound, capable of caressing the heart-rending solace to the dying man she loves in “I Don’t Need A Roof” and belting out the silly USO show number “Red, White and True.” Her flashing eyes and huge smile radiate vitality. Sandra is a tougher role than it looks, easily devolving into a one-note of steadfast adoration. But Olson is an actress first and she brings subtle colorations as well as that unswerving commitment to the interior of the part.

Fox-Hall is a South Florida native, really not seen much locally other than in the huge ensemble of Actors’ Playhouse’s Ragtime last season. You’ll see a lot more of him from now on. First, he has a soaring expressive voice that elicited the longest mid-show ovation for his angst-riven exploration of his problematic relationship with his father in the number “Stranger.” Second, he, too, has conquered another one-note kind of role by delving deep into Will’s complex alienation.

Girwarr not only sounds lovely but brings a sense of optimism and welcoming nature that plausibly counter-balances Will’s cynicism.

The performers not in lead roles still have been urged to create an individual character or actually multiple characters. Christopher Mitchell is the giant Karl, co-founder Matthew Korinko is the opportunistic circus owner, Gabe Sklar who was in GableStage’s Mothers and Sons exudes the proper air of youthful skepticism as Young Will, Ben Sandomir just off The Last Five Years is the high school bully, Kendra Williams gives kick butt voice to the swamp witch, Leah Marie Sessa has a lovely voice and provides the crucial plausible turn as Edward’s high school sweetheart, Geoffrey Short is the town doctor, and Emily Tarallo plays a mermaid, a dancing fireball and triples as the dance captain. Also in the indefatigable ensemble are Brian Varela, Corey Vega, James Patrick Giordano, Nicole Kinzel, Meaghan Nagy and Joshua Conner.

The show should have allowed some non-actors to take a bow: Sean McClelland for the sets, Preston Bircher for the lighting, Richard Szczublewski for the sound, Britni Serrano for the stage managing, and Rick Pena’s design and construction (with a crew) of 500-plus costumes. You can always find things to kvetch about: Some of the scene changes took too long, slowing down the momentum a bit, and sound cues were a bit lagging especially for Josephine.

But trust us. This only runs two more weekends. If you miss this, you only have yourselves to blame. Oh, and remember to bring that Kleenex.

Slow Burn Theatre Company presents Big Fish at the Amaturo Theater, Broward Center For The Performing Arts, 201 SW 5th Ave., Fort Lauderdale, through Nov. 8. Performances are Thursday through Saturday at 7:30 p.m., and Sunday at 2 p.m. Running time 2 hours 40 minutes with one intermission. Tickets are $45. Call (954) 462-0222 for tickets, at www.browardcenter.org or #Ticketmaster.com; in person at Ticketmaster outlets or the Broward Center’s Auto Nation Box Office. Info at www.slowburntheatre.org 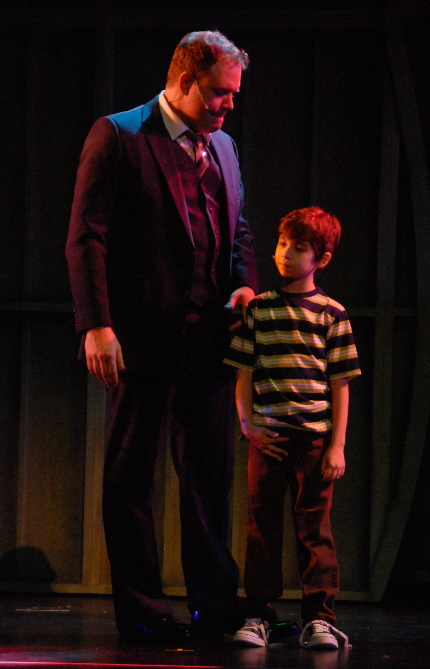 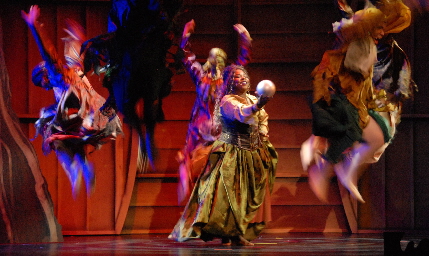 Kendra Williams and the dance ensemble 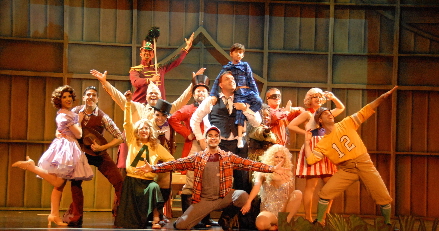