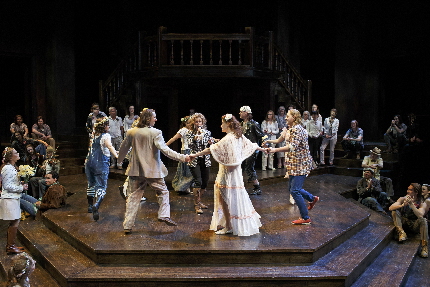 Members of the company in As You Like It / Photography by David Hou.

The dictionary translates the Latin phrase “sui generis” as “constituting a class of its own,” but more commonly it’s used to mean “not like anything else,” often with the implication of excellence.

The expression insinuated itself over and over while spending a week at the Stratford Shakespeare Festival last month, reviewing nine shows, taking behind-the-scenes tours and talking with the artists.

The words echoed during a gritty Macbeth, a raucous As You Like It with the audience holding up branches to form the Forest of Arden, the mint-fresh A Chorus Line re-choreographed on a thrust stage, a play-with-music version of the film Shakespeare In Love, a new conflation of four history plays, and a commitment to cross-gender and cross-ethnic casting so aggressive that it’s become too routine to be noticed.


The easiest way to grasp the sense of the Festival is to look at the individual pieces we saw. Read reviews of the shows we saw by clicking here.

The clear sense was that the offerings were not necessarily better than those in New York or London. Instead they were so singularly “sui generis” that they could not be compared to any other production. But they each shared, as representative of Festival productions, was a commitment to reinvention and deconstruction in pursuit of increasing their relevance and accessibility for modern audiences.

If some experiments worked better than others, the Festival exhibited a reliable consistency in – to precisely use these words — imagination, talent, skill and a remarkable attention to detail encompassing performance to props, costumes to lighting. The end result was enviably engaging and enchanting as few such troupes achieve.

That may seem expected with an annual budget of $61 million Canadian of which five to six percent comes from government subsidy. But it’s not the bountiful resources that impress so much as what the artists and artisans do with them as they mount at least a dozen major productions in repertory (right there an anomaly in North American theater) in a season that stretches from late spring to mid-fall.

The productions – encompassing the Bard, contemporary classics, world premieres, children’s theater and Broadway musicals — all share an ingrained unspoken sensibility: Live theater truly matters even in this multi-media digitized 21st Century, that it can be unapologetically entertaining, inescapably relevant and supremely ennobling at the same time. Certainly, most theater companies claim the same ethos, but Stratford exudes a no-nonsense proletarian vibe while executing its art with enough of a highly-polished skill level to satisfy any cultural snob.

Donna Feore, a veteran Stratford director, said, “I don’t know of another festival that has this kind of range of program where in the afternoon you can see (Ibsen’s) John Gabriel Borkman and in the evening see a major musical like A Chorus Line.”

Since 1953, this former railroad hub amid cornfields 85 miles west of Toronto has been the unlikely host to the finest theatrical talent in the English-speaking world from Tyrone Guthrie and John Gielgud to Christopher Plummer and Brian Bedford. In recent decades, it has tried to limit itself to Canadian talent or natives who moonlight in state-side films. The result is a considerable base of returning theater luminati criminally under-recognized below the border such as Geraint Wyn Davies, Stephen Ouimette, Colm Feore, the late William Hutt, Martha Henry and Paul Gross.

The expanding enterprise offers extensive lectures, events, tours, special events, classes for professionals and students, and now is filming the entire canon in HD for broadcast in movie theaters, and released on DVD.

But the gemstones are shows presented in four venues across the city. The main Festival Hall and administration center features a 1,800-seat double-decker state-of-the-art auditorium with a deep thrust stage. No patron is more than 65 feet from the front of the stage. The surprisingly intimate design by Tanya Moiseiwitsch has been copied by scores of companies.

The 410-seat Tom Patterson Theatre is nestled alongside the Avon River, an arena-like space that can be used in the round or as a long thin thrust. Downtown is the Avon Theatre renovated into a handsome warm proscenium stage. Behind it is the 260-seat black box Studio Theatre.

But the Festival footprint is all over town including an 11,000-square-foot complex for the building and storage of its huge costume/prop inventory and rental business. It is one of the sites you can tour (with a chance to try on an array of genuine costumes at the conclusion of the hour-long stroll). You also can watch the stage crew change over the massive sets from the matinee at the Festival Theatre to the ones used for the evening show.

Still, the most breathtaking aspect is the scope of productions scheduled so that you can see half or more of the offerings in just a four-day stay. The current season lasting through mid-October includes the previously mentioned works plus a new adaptation of C.S. Lewis’ The Lion, The Witch and The Wardrobe, a fresh translation of Moliere’s The Hypochondriac, a rethinking of Sondheim’s A Little Night Music, a cross-cultural spin on Arthur Miller’s All My Sons, a new vision of The Aeneid, a world premiere Bunny, and Breath of Kings, the stunning two-evening amalgamation of Richard II, Henry IV Parts I and II and Henry V.

Next season, the titles include Romeo and Juliet, Guys and Dolls, Twelfth Night, Tartuffe, Treasure Island, HMS Pinafore, The School for Scandal, Timon of Athens, The Changeling, Bakkhai by Euripides, The Madwoman of Chaillot and two world premieres.

The only theater effort of a similar nature exists 120 miles to the east, the Shaw Festival at Niagara-on-the-Lake on the southern shore of Lake Erie. (To read our features on the Shaw from last year, click here and here.) The Shaw is not quite as well funded as Stratford and not quite as expansive in scope, but the quality of work is comparable. While Stratford has the required tourist-oriented shopping, it’s more of an agricultural county seat with an injection of culture. Niagara-on-the-Lake is much smaller and modest, but it is a jewel box of a town beautifully landscaped and jammed with quaint shops, B&Bs and surrounded by wineries.

While there is a puddle-jumper airport at Stratford, the best access for Floridians is to fly into Toronto, Detroit or Buffalo with their passports and cross the summer prairie by car, or take a dedicated bus from Toronto. The plays are feathered in from the beginning of the season and eased out near the end, so the best time to see the most shows is late June through July into early August. The area is dotted with a few hotels that fill up mid-season but also hosts a slew of B&Bs. The region features a few other tourist spots including quaint shopping villages and lovely parks, but the draw is the Festival.

In the end, the opportunity to hear classic theater spoken and performed at such a consistent level of excellence explains why a half-million people visit the Festival each year with a quarter of that total coming from the States including Florida. 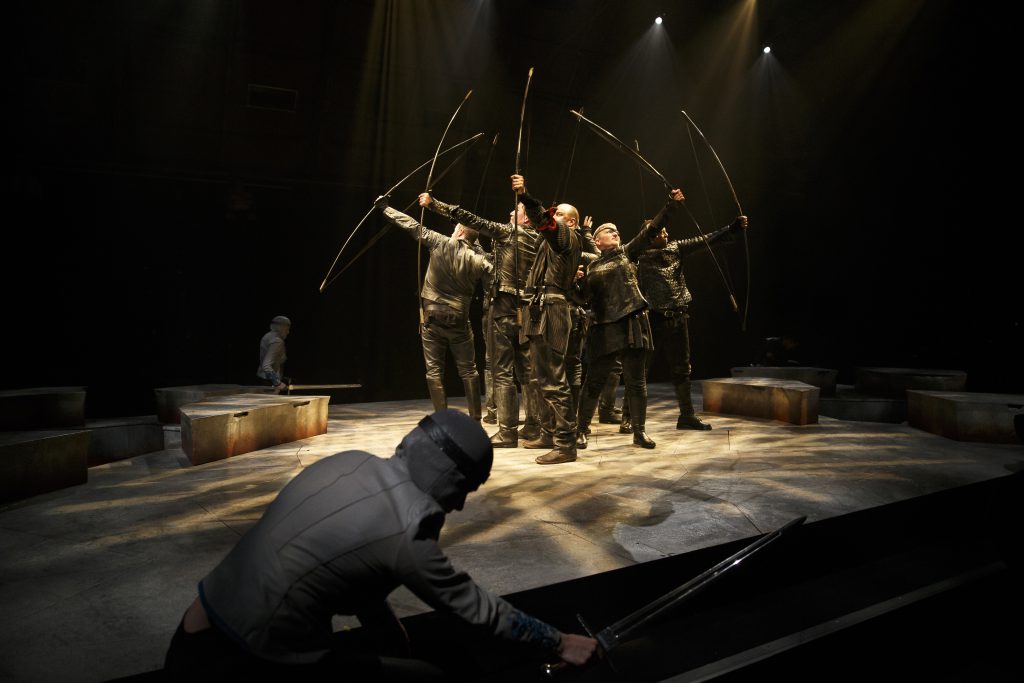 Members of the company in Breath of Kings: Redemption. Photography by David Hou.

This entry was posted in Features and tagged Stratford Shakespeare Festival, William Shakespeare. Bookmark the permalink.