Posted on September 3, 2016 by Bill Hirschman 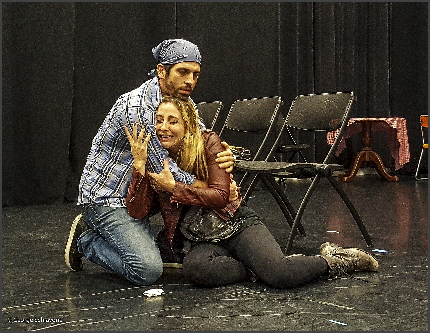 We’ve written a paragraph like this only two or three times: Stop what you are doing. Stop reading this review. Go to the phone or online and order tickets right now for Ground Up & Rising’s superb production of Stephen Adly Gurgis’ Our Lady of 121st Street.

There are only five performances left over two weekends including tonight. Cancel the cookout. There will be another football game. Theater this hilarious, this heartbreaking, this brutally honest in its depiction of fallible humans beings flailing for coherence in their lives, this does not come around often.

If this wasn’t ineligible for Carbonells because actors’ availability limited the number of performances, a lot of nomination slots would be blown away by this theatrical equivalent of Hurricane Hermine.

For a company with meager financial resources, no permanent home and an unpredictable schedule, the quirky edgy Ground Up troupe still has delivered amazing theater across Miami-Dade County since 2005 – as varied as the shattering Vincent River last summer to local artist Meshaun Labrone’s excoriating The Hate U Gave: The Tupac Shakur Story in 2007.

But Our Lady may be its best work ever, thanks to a confluence of acting talents – mostly present and former company members—expertly molded by troupe co-founder Arturo Rossi.

Staged in the black box theater at South Miami-Dade Cultural Arts Center with the barest of furniture and props, Ground Up’s company limns a broad swath of an underclass community in New York City condemned to endless struggles by social ills and inequities, but also by the universal foibles and flaws that human beings are heir to.

And yet, thanks to Gurgis, these quick-witted, natively articulate, foul-mouthed, deeply damaged but unconsciously resilient survivors are as funny as any characters you’ve seen recently.

This is theater and Ground Up has not shied away that Gurgis has created slightly over-the-top denizens who are “characters.” But their peculiarities fit with the play’s view of a cruelly arbitrary world awash in comic and tragic absurdities.

As we meet a dozen characters in a procession of duets and trios, they initially seem disconnected strangers at the imminent funeral for their beloved Sister Rose, an alcoholic but altruistic nun who graced this downtrodden corner of Manhattan.

But this multi-ethnic group is really a severely fractious extended family. Many grew up together; some have been lovers. Even the strangers have a connection to someone in the inner circle. Their backstories clumsily fit together like a roughly cut jigsaw puzzle with ragged razor-sharp edges that prohibit much emotional intimacy.

The classically Gurgis mordant kicker is, as the play opens, someone has stolen Sister Rose’s body out of the upended casket on stage. The mourners arriving from across the country have to kill time until the body can be found. One mourner, who fell asleep waiting for the service, had his pants stolen.

The double-measure of grief explains why these people already nursing a cargo plane full of crippling baggage cannot keep from unleashing two decades of pent-up pain in explosions of rage, tears and obscenities.

As they interact, long-festering problems are not resolved so much as inescapably laid out in front of each person so that they will have to acknowledge them and decide how to proceed.

The cast is made up mostly of people who have worked with Ground Up before; some of them have flown back to appear and must leave after the closing matinee. Every last member of this smoothly integrated ensemble is so effective together and individually that it would be grossly unfair to leave out anybody. So, sit tight….

The most indelible is Carbonell-winner Marckenson Charles as Rooftop, now a morning drive time DJ in Los Angeles who repeatedly betrayed his wife Inez before abandoning her. Nailing Gurgis’ intent, Charles’ Rooftop spends his initial scenes in an atypical confessional (15 years late) with the crusty and faith-challenged Father Lux (a wonderful George Schiavone). Rooftop’s snappy glib repartee is pure Chris Rock until suddenly Charles, Gurgis and Rooftop take a credible left turn revealing Rooftop’s introspective pain. Like everyone in the cast, Charles pivots instantly and believably from riotous humor to moving angst.

Gregg Weiner is cast so often in similar roles locally that it’s easy to forget what he can do when he is challenged. He excels here diving deeply into Balthazar, one of the few white Anglos from the neighborhood, who is investigating the theft in between too frequent slugs from a hip flask. Weiner’s “B” is sort of the community peacekeeper who is tortured by a secret that does not emerge until the last scene.

The linchpin is Curtis Belz’s Edwin, a building superintendent providing full-time care for his brain-injured brother Pinky who roams the streets inventing a delusional fantasy life. Belz’s Edwin is no saint, but his protective devotion to Pinky is heart-rending. His performance crests when he savagely excoriates Pinky for disappearing for hours with an opportunistic prostitute, and then collapses in self-lacerating agony built up over decades of fear and frustration.

Similarly, Rayner Gabriel Garranchan has been in some uninspiring projects but indisputably proved his talent and skill in Outré Theatre Company’s Back of the Throat in 2014. That didn’t prepare audiences for his note-perfect performance here as Pinky, a gut-wrenching depiction that neither condescends nor sugarcoats the reality of a permanently naïve adult in a dangerous environment.

Shein Mompremier, a new face, creates the ferocious amoral user Norca as a mercurial cyclone of anger who has been taught by the street not to care if anyone gets hurt by her totally self-centric behavior.

But also acknowledge Keith C. Wade’s homeboy Robert, now a gay lawyer in Wisconsin, who wants to meld back in with his old buddies who know him as Flip; Christian Vandepas as Robert’s fluttery lover Gail who sees their relationship imploding; film/TV actor Antoni Corone in his stage debut as Victor, the pantless mourner enraged at how the violation of the body exemplifies the neighborhood’s decline; the welcome return home of Kameshia Duncan as the incendiary Inez so damaged by Rooftop’s abandonment that it has poisoned her compromise for a new life; Rachel Chin is Sonia, a Connecticut Brahmin providing moral support to Marcia and the unnerved fish out of water here.

These are life-hardened victims who have grown over 15 years, yet whose scars have not been dealt with. When Rooftop is sympathetically reminded of the death of his 10-year-old brother who fell while exploring an elevator shaft, Rooftop angrily masks his pain by blaming his brother for being stupid when other children had died the same way.

Father Lux, crippled during the Korean War, admits to Rooftop that when he occasionally believes in the existence of God, he’s furious with Him.

The characters may lean toward the weird side, but every single one is believable because of the performances and because Gurgis has created complex human beings. For instance, Edwin is laudably admirable in his soul-eroding care for his brother. But it’s revealed that some of his virtue is rooted in guilt. More telling, as Marcia exposes, he also is using Pinky as an impenetrable excuse not to become emotionally involved with other people.

Especially notable is how the actors disappear so completely into their characters that you have to recheck the program to realize that the fiercely caustic Mompremier was the prim sister in GableStage’s The Royale a few months ago or Vandepas’ fey gay actor is the same person who was in Bonnie & Clyde, The Minister’s Wife, Dying City and 9 Circles.

Rossi infuses Gurgis’ vibe in every moment. His staging, especially in pacing, is exemplary. But his triumph in a play packed with venting rants is his insistence that actors pause to indicate characters absorbing what someone just said, weighing those words and then formulating an answer. The only caveat is that the black box is a wide space and he stages much of the play down front dead center with characters facing each other in profile. Therefore, patrons would be well advised to sit as close to the center of the seating area as possible for the best view.

A nod is due Will Cabrera whose lighting helps create the different locales and moods when the sets are really nothing but a few chairs.

Gurgis is not a household name among mainstream households, but he has built an enviable reputation over the past two decades as a vibrant gutsy writer portraying the underclass with grit and honesty. His 2014 play, Between Riverside and Crazy won the 2015 Pulitzer Prize and is on GableStage’s calendar for next season. South Florida theaters favoring edgier works reflective of the current zeitgeist have championed his work including GableStage’s The Motherf***er With The Hat (which starred Rossi) and two of Ground Up’s early productions, Jesus Hopped the ‘A’ Train and The Last Days Of Judas Iscariot.

There’s a lot of talk in Our Lady about how life is unfair. What’s unfair is that you only have five more chances to see this.

Quick side note: This is not a musical, people. I really wish you would stop applauding during every scene change. It erases the magic illusion of watching life.

Our Lady of 121st Street runs through Sept. 11 from Ground Up & Rising at the South Miami-Dade Cultural Arts Center, 10950 SW 211th St., Cutler Bay. 8:30 p.m. Friday and Saturday, 2 p.m. Sunday. Tickets are $21 general admission; $16 for seniors, AEA and SAG-AFTRA union members with ID; free to people under the age of 25 with government-issued ID one half-hour before curtain if seats are available. The show runs 2 hour 15 minutes with one intermission. Call (786) 573-5300 or www.smdcac.org for information.